Grocery shopping can be a drag—especially waiting in the checkout line. It’s not clear what’s worse: winding up behind someone with a ton of items or being surrounded by inane tabloids. Still, truth be told, it’s hard to resist the headlines about turbulent celebrity relationships and death-bed confessions. In recent years, paleoanthropologists have produced their own tabloid-like headlines, though they’ve been published in some of the world’s best peer-reviewed science journals. The sensational story?—whether or not humans interbred with hominids, specifically Neanderthals and the newly discovered Denisovans.

The sordid details came to light when scientists completed the draft sequence of the Neanderthal genome.1 A comparison of that genome with representative human genomes revealed that Neanderthals had more in common with non-African people than with Africans. Geneticists can account for this difference by assuming limited interbreeding occurred between humans and Neanderthals in the eastern portion of the Middle East, roughly 45,000 to 80,000 years ago, as humans began to migrate around the world. This activity would explain why non-African populations display what appears to be a 1 to 4 percent genetic contribution from Neanderthals while African people groups display no contribution whatsoever. 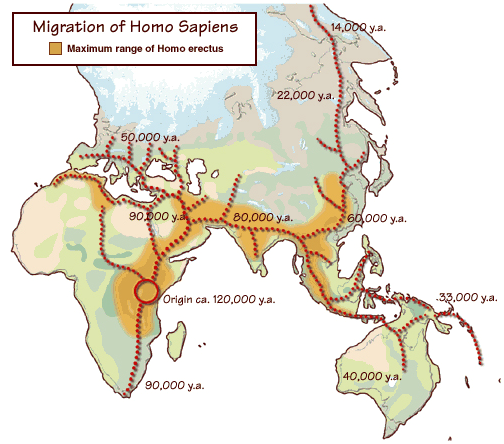 HUMANS ON THE MOVE

Remarkably, when the Denisovan genome is compared to representative human genomes, it displays a much greater similarity to the genomes of Oceanic people groups than to other human populations.2 Researchers suggest this result indicates that after humans interbred with Neanderthals, a subset made its way across Asia, interbred with the Denisovans (from Siberia), and left behind signatures in the genomes of Oceanic people groups (where they settled).

How would such human-hominid mating impact RTB’s human origins model (derived from the biblical text)? The RTB model views Neanderthals (and other hominids) as biologically and behaviorally distinct from modern humans. If this is the case, then the most straightforward prediction is that humans and hominids did not interbreed.

Nevertheless, many people regard the idea of interbreeding between humans and Neanderthals (and then humans and the Denisovans) as scientific orthodoxy. Yet some paleoanthropologists are not convinced. The evidence for such interbreeding is primarily statistical in nature. To account for the observed statistical associations, geneticists have tapped into a massive amount of complex data while attempting to model complex population phenomena using sophisticated algorithms. Richard Klein, a paleoanthropologist from Stanford University, proposes that the evidence for interbreeding may not be real but may stem from an artifact of the methodology.3

Along these lines, some researchers have concluded that humans and Neanderthals did not mate at all. These researchers claim that the statistical association between the Neanderthal (and Denisovan) genome and those of non-African people groups could arise from the ancient population substructure of the African genomes.4 It appears that the ancestral population possessed the genetic signature attributed to Neanderthals.

Additionally, Klein has complained about the “tendency for geneticists to ignore fossil and archeological evidence, perhaps because they think it can always be molded to fit the genetics after the fact.”5 When it comes to the timing of Neanderthal extinctions, the scenario proposed by geneticists doesn’t square with the fossil and archeological records. In 2011, researchers from Great Britain and Russia demonstrated that Neanderthals were already extinct before humans made their way into Europe. (See “Does New Date for Neanderthal Extinction Mean the End of Human-Neanderthal Interbreeding?”) If so, these hominids may have already been extinct in the Middle East (pathway to Europe) even before humans began their migration out of Africa. In other words, it’s possible humans never encountered Neanderthals in Europe nor in the Middle East.

Another complication relates to the population size of Neanderthals estimated from the genetic diversity of mitochondrial DNA sequences.6 The effective population size of Neanderthals across Europe and Asia may have been as low as 3,500, and the Denisovans, based on their high-quality genome, must have had a relatively small population size as well.7 The low population densities of the two hominids greatly reduce the likelihood that migrating modern humans would have encountered these creatures, making it hard to imagine how interbreeding could have occurred.

If humans and Neanderthals (and Denisovans) paired up, researchers should detect Neanderthal genes within the human genome. Possible evidence for this view came from an international team of scientists that detected HLA (human leukocyte antigen) genes in the human genome. It “looks like” these genes originated in Neanderthals and Denisovans and were introduced into the gene pool of Eurasians and Oceanic people through interbreeding.8 These genes play a role in the immune system’s operation and would have, presumably, provided an advantage to humans as they made their way out of Africa into Europe and Asia. Entering into new environments, humans would have been accosted by pathogens they weren’t exposed to in Africa. Neanderthals and Denisovans would already have the genes in place to fight off these pathogens.

It is important to note that variants for the HLA gene occur in some African people groups. The researchers who discovered these genes in the Neanderthal and Denisovan genomes assumed that the hominid HLA genes were introduced into African genomes when people of Eurasian descent mated with Africans (in a backward gene flow). But it could be that the HLA genes already existed in the human gene pool before human migrations commenced. In that case, the shared genes could be understood as reflecting shared design features.

In light of the HLA story, it is odd that Neanderthals did not contribute genes for light skin pigmentation to humans as the latter group entered Europe. Analysis of the Neanderthal genome shows that these creatures had light skin and hair. A recent study dates the origin of gene variants (KITLG, TYRP1, SLC24A5, and SLC45A2) that play a role in producing light skin pigmentation from around 11,000 to 19,000 years ago in Europe.9 Their origin took place well after humans had made their way to Europe and after Neanderthals had gone extinct. Light skin pigmentation improves fitness for northern-dwelling people by helping facilitate production of vitamin D. Given its importance, it is surprising that Neanderthals did not contribute this trait to the human gene pool, yet, purportedly introduced genes that contributed to the immune system. The two sets of genes don’t tell a coherent story about human-Neanderthal interbreeding, raising skepticism on the validity of this idea.

Just as there are good reasons to be skeptical about what one reads in a supermarket tabloid, further investigation has uncovered good reasons to be cautious about concluding that interbreeding between humans and other hominids ever took place.

Have you been following Take Two’s list of things we’re thankful for this year? Family, friends, and God’s faithful provision are obvious bringers of...
Human Origins & Anthropology

Comic books intrigue me. They are a powerful storytelling vehicle. The combination of snapshot-style imagery, along with narration and dialogue, allows the writer and...
Human Origins & Anthropology