Physicists at CERN’s Large Hadron Collider (LHC) have reported new results showing that the “Higgs-like” boson discovered in 2012 is indeed consistent with expectations for a standard model Higgs boson (sometimes called the “God Particle”). This important particle could help explain the “how” of creation ex nihilo, or how God created everything out of nothing. The Higgs also gives mass to matter, a necessary condition for life to exist.

In 2012, when a newfound “Higgs-like” particle made international headlines, the only properties physicists had yet measured were the particle’s mass and the rate at which it was seen to decay into a number of final states (primarily into two photons).1 Yes, these properties were consistent with those expected of the Higgs boson—but there are potentially other particles that could exhibit these characteristics, too.

Thus, since 2012, physicists have been working hard to determine the true identity of this particle. Is it really the Higgs or is it some other particle? Preliminary results from these studies were recently released.2

Creating Everything from Nothing

The Bible describes God as creating the cosmos—all matter, space, time, and energy—from nothing, a scenario (known as creation ex nihilo) supported by big bang cosmology. Exploring and understanding the Higgs boson could give us a glimpse into how God went about accomplishing this awesome work. (Hence one reason why some have nicknamed the Higgs “the God Particle.”)

Without the Higgs boson, the universe as we know it would not exist. Research indicates that in the beginning of the universe, all particles were massless, so everything travelled at the speed of light. Moreover, the universe was most likely completely empty since no energy existed to create any particles. However, through a process called the Higgs mechanism, enough energy was released to help power the big bang and create matter. At the same time, the Higgs mechanism gave some particles mass, allowing them to come to rest. Without mass, life could not exist.

How the Higgs Boson Works

Most particles have a potential energy surface that looks like a bowl or valley with the lowest point at the origin, where the field of particles is zero (see figure 1). Another way of understanding this potential is to imagine standing at the bottom of an empty swimming pool. In order to get out of the pool you would need to expend energy to climb, no matter the direction. Likewise, energy is required to make a non-zero number of particles. 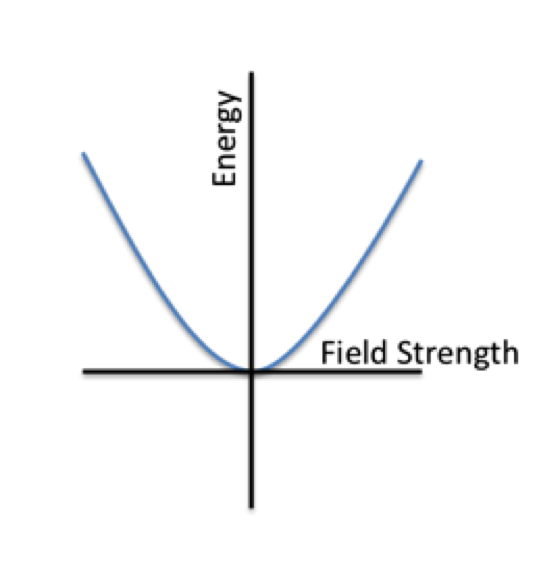 The key to the Higgs mechanism is that the Higgs potential is shaped like what physicists refer to as a Mexican hat potential, with a peak at the origin rather than a valley (see figure 2). (For this potential, picture sitting on a bicycle at the top of a hill; any direction you roll, you will gain kinetic energy.) So, the Higgs boson’s lowest energy state is not at zero but is at some finite value of the Higgs field. In technical terms, the Higgs has a non-zero vacuum-expectation-value (VEV). 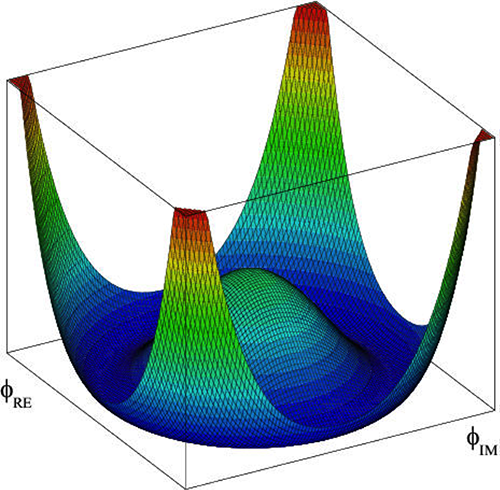 After spontaneous symmetry breaking (in which the system “chooses” a direction for the field),3 the Higgs field has a non-zero VEV, which means that there is a Higgs field everywhere in the universe. You might say it is omnipresent. When this happened at the beginning of the universe, the process released enough energy to create matter and to help power the big bang. Additionally, because all other particles need to propagate through this Higgs field, it slows them down (similar to a person walking through water) and gives the particles mass. The stronger the coupling to the Higgs field, the more massive the particles are. Without mass, matter wouldn’t exist, and without matter, we wouldn’t exist.

In July 2012, physicists at Fermilab announced evidence for a new particle that decays into b-quark pairs. Two days later, physicists at CERN announced the discovery of the Higgs-like boson, which decays into pairs of bosons (photons, W’s, or Z’s). Because the Higgs couples to mass, it wants to decay into a pair of the heaviest particles possible. The heaviest particles with mass less than half a Higgs (125 GeV/c2) are bquarks; most Higgs bosons decay into a pair of b’s.

There are many other processes that produce pairs of b quarks and events that look nearly the same as a Higgs decay process, making it very difficult to distinguish Higgs decays from this background. However, physicists from Fermilab and CERN have announced research results that did just that. The Fermilab team produced results with a significance of three standard deviations (3σ). In particle physics, 3σ is the threshold to claim evidence; claiming discovery requires exceeding a 5σ threshold.

Fortunately, CERN physicists were able to achieve a 5σ threshold thanks to the LHC’s higher energy and higher intensity, which allowed them to look for very rare Higgs decays (a pair of photons, for example) that had much less background interference. By analyzing new data (in addition to what was analyzed in 2012), the CERN team was able to find evidence for the Higgs particle decaying into fermions (quarks and leptons). Because each fermion has a different mass, the coupling to the Higgs is different for each fermion, thus the branching fraction for the Higgs to decay into each type of fermion is also different.

So far, all the evidence continues to support the hypothesis that this particle is the standard model Higgs. However, much work remains to be done before we can claim that the particle discovered in 2012 is really the Higgs boson that may have played a critical role in God’s creative miracles.

Dr. Thomas Phillips received his PhD in particle physics from Harvard University in 1986, and recently retired from the faculty at Duke University to work as an entrepreneur. He is also currently a research professor of physics at the Illinois Institute of Technology.

“What’s All This Higher Dimensionality Stuff?”, Part 4 of 7