During my senior year of high school, I was the proud winner of the Periodic Table Competition at the West Virginia State Science and Engineering Fair—and I still have the trophy to prove it! My victory that day sealed my fate as a geek and foreshadowed my future as a chemist and biochemist. For the next four years of college, and the ensuing years as a graduate student, the periodic table of elements was never far from my side.

In 1869, Russian chemist Dmitri Mendeleev devised the periodic table of elements. He discovered that ordering the chemical elements according to atomic number exposed periodic trends in the elements’ chemical and physical behavior. This periodicity allows scientists to make sense of the bewildering complexity of chemical systems and provides them with a user-friendly framework to organize and predict chemical and physical properties.

Biochemists have long sought to discover a similar framework to organize and predict the structure and function of biomolecules, such as protein complexes. It hasn’t been clear if it’s even possible to order and organize biochemical systems because many scientists regard biochemical systems as the product of an unguided, historically contingent evolutionary history. According to Joe Marsh, “Evolution has given rise to a huge variety of protein complexes, and it can seem a bit chaotic.”1

The historical contingency of the evolutionary process seems to provide a reasonable explanation for this bewildering array. Presumably, these unguided processes transformed preexisting proteins into complexes that, in turn, have been shaped by natural selection to perform key functions in the cell. In other words, there is no underlying rhyme or reason to the structure of protein complexes. They merely reflect a history governed by random changes operated on by natural selection. 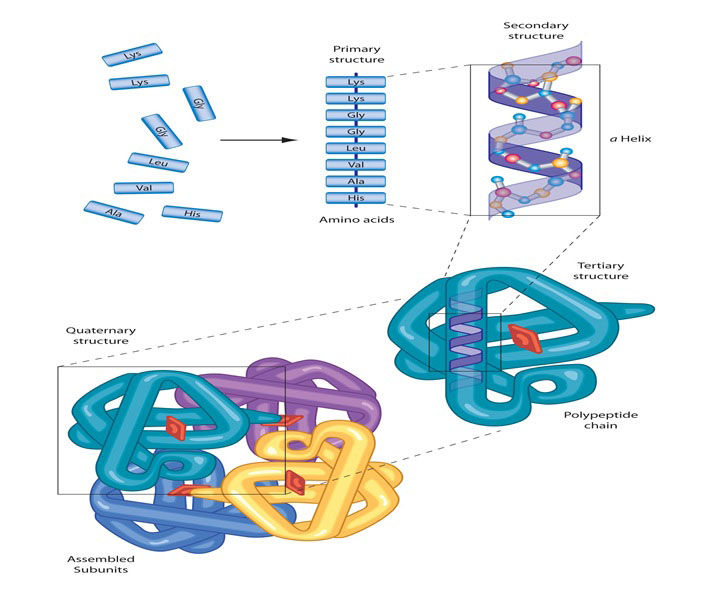 However, recent insights indicate that the laws of nature may fundamentally dictate the organization, structure, and function of biochemical systems.2 Scientists from the United Kingdom added to these insights when they discovered a way to create a biochemical periodic table that explains and predicts the structures of protein complexes observed in nature.3

In my view, the existence of a simple set of rules that accounts for protein complex structures points to an underlying orderliness and purpose to the universe that reflects the work of an intelligent Creator.

The researchers also recognized that the nature of the interactions between the subunits is important. They identified two types of interactions:

As a biochemist, I find it stunning that these researchers were able to explain the baffling complexity of protein structures with a simple set of rules. Sebastian Ahnert, a member of the team, proclaimed, “We’re bringing a lot of order into the messy world of protein complexes.”4

This work will have obvious implications for our fundamental understanding of protein structure-function relationships. It will also have important biomedical applications because faulty assembly of protein complexes contributes, in part, to the etiology of a number of diseases. A protein complex periodic table will also be a useful tool for work in biotechnology and protein engineering.

As a Christian, I also see important theological and apologetic implications. Remember that according to evolutionary theory, we should not expect to see underlying rhyme or reason to protein complex structure. Yet this latest discovery highlights exactly that—orderliness and intelligibility in nature. Such a scenario harmonizes with the Christian worldview’s belief that God, who has revealed Himself to human beings through His creation, created the universe.

This advance also means that yet another key biochemical feature is not historically contingent but is fundamentally specified by the laws of nature. This reality strikes down a tenet of evolutionary theory. It also means that shared structural features of protein complexes cannot be used to infer evolutionary relationships.

This discovery also lends support to the existence of a biochemical anthropic principle. It is remarkable to think that protein complexes are a manifestation of the laws of nature and are, at the same time, precisely the types of structures life needs to exist. I interpret this “coincidence” as evidence that our universe has been designed for a purpose.

Finally, while this insight challenges evolutionary theory, it also challenges one of the most popular arguments for intelligent design—namely, the use of probability calculations to demonstrate that random processes can’t generate information-rich biomolecules, such as proteins. As I’ve pointed out before, this line of argumentation is faulty.5 The work by the UK team demonstrates that if protein structures are specified by the laws of nature, then physicochemical (and maybe even biochemical) constraints force proteins into a limited region of protein space. Though protein space is vast, in principle, in reality much of it can’t be occupied because only a subset of protein structures is viable per the laws of physics and chemistry.

Overall, the new periodic table for protein complexes reveals that the structure of biological systems may reflect some deep and underlying principles that arise from the very nature of the universe itself. And as a Christian, I find that notion to resonate powerfully with the idea that life manifests from an intelligent agent—namely, God.

I recently bumped into an acquaintance outside the Staples Center after a Lakers game. Neither of us was aware the other was at...
Biochemistry

I have three teenage daughters who frustrate me to no end at times. I’m the type of person that likes to get where I’m...
Biochemistry