As God-ordained stewards of creation, we have an ability not only to care for animals and pets but also to form relational bonds with them. A recent report in Biology Letters highlights this relational capacity in domesticated goats. This finding indicates to me that the potential for humans to form bonds with many different animals (not just those trained for companionship) is part of creation and that this bond directly reflects our call in Genesis 1:26–31 to be stewards of creation.

Unlike most beagles, Chaim does not bark, and he is a very picky eater. Now, it is blissful to me that he doesn’t bark! His picky eating, though? Not so much. You might imagine that his unwillingness to bark makes it difficult for him to get my attention. Not to worry—he has found other ways of communicating with his human that are very effective. 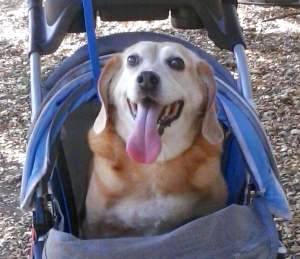 His choice of communication involves shaking his head so that his ears flap and silently yawning (or gently raising one paw if I am neglecting to pet him enough). His ear-flapping makes just enough noise to get my attention. And the yawning is his affirmative response to my inquiries regarding his need to go outside or need for water. On occasion, yawning is also a manifestation of his stubborn-beagle will, not wanting to go in the direction I want us to walk.

Dogs and horses (and human toddlers, but apparently not cats) demonstrate gazing behavior as a form of referential and intentional communication. This type of communication can be assessed using experiments designed to present an “unsolvable problem” to the test subject (dog, horse, or toddler) involving an inaccessible food reward. In such inaccessible reward experiments, gaze alternations that take into account the attentive stance of a nearby human are indicative of intentional and referential communication.

In other words, if I’m looking at you, and I see you’re looking at me, then I’m talking to you. So pay attention to me!

Most people recognize the capacity for emotional, relational bonding of humans and dogs. Many also know similar capacities for relational interactions and bonding present in other animals, like birds. But what about other domesticated animals that aren’t of typical pet status, like pigs, cattle, ferrets, or rodents? Can steward-creature bonds be formed with animals like these? Recent research in domesticated goats suggests that it can.1

Staring Really Gets Some Researchers’ Goats

Researchers at Queen Mary University of London were interested to know if this type of behavior was true of other animals, even when they are not bred particularly for human companionship or trained to work closely with humans. In a series of inaccessible reward experiments with domesticated goats that were highly habituated to humans, they discovered that goats behaved with “an audience-dependent human-directed behavior.”

During the challenge of an inaccessible food reward, goats looked more frequently, more quickly, and for longer periods of time toward humans who were facing the goats than they did to humans who had their backs turned toward the goats. The video demonstrates the differing experimental outcomes observed.2

Importantly, the goats in this study had experienced long-term positive interactions with their human caretakers. This alleviated any fear factor (in anticipation of danger from the human researchers) that would likely have inhibited the goats from expressing the desired human-oriented behavioral outcome.

The researchers demonstrated that goats show human-directed visual orienting behavior similar to the referential and intentional communications shared among hominoids and observed between humans and companion animals such as dogs and horses. They believe their observations challenge the theory that this type of somewhat-complex communication behavior only arises in animals domesticated for human companionship. It may. But I believe it demonstrates that animals have great capacity to relate to and communicate with their human caretakers when those caretakers (and others like them) are not abusive or negligent but demonstrate godly care for the animals left under their protection.

We have been given a great charge to steward creation. It is not hard for me to envision how humanity and animals could live in harmony when we humans are mindful of their well-being rather than domineering as alpha predators. I’ve even experienced this harmony with nature’s creatures to a certain extent myself. And I’ve heard that Hugh Ross and St. Francis of Assisi have demonstrated a certain affinity for engendering trust among animals as well. Perhaps this is the type of steward-creatures we should aspire to be.

Should we expect to see this type of relational capacity in all animals? Will the mental or cognitive capacity of various animals affect their capacity for relational interactions and especially communication with humans? Additional research in songbirds and parrots indicates that cognitive capacity may not be contingent upon the size of the animal or the mass of their brains, but upon the density of neurons packed into their brains.3 For now, share your thoughts and questions with me on my Facebook page, and we’ll consider cognition and bonding potential in an upcoming blog.

It was one of the most painful experiences I ever had. A few years ago, I had two back-to-back bouts of kidney stones. I...
Biochemistry

My husband, Mike, is devoted to order. He even has a standard way of tucking his shoelaces into his shoes after removing them. I...
Biochemistry

I started this article series by retelling an evolutionist’s claim that the existence of Alu elements in the human genome is proof of evolution....
Biology