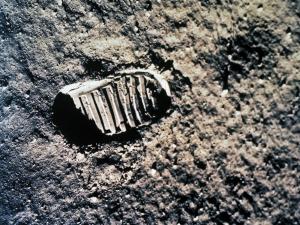 On July 20, 1969, the world watched as the first human stepped onto the surface of the moon. Today, we scroll online news reports as the world remembers the man whose mission would become a part of history.

In the 43 years since Neil Armstrong uttered his famous words, humanity has continued to make giant leaps toward understanding the Moon and its unique place in cosmic history.

As astronomer Hugh Ross puts it, “The Apollo program helped us solve the mystery of the moon’s origin and helped establish how amazingly designed the moon is for the support of advanced life on Earth.”

In their book Origins of Life, Ross and biochemist Fazale Rana explain how, from the lunar rocks collected during the Apollo missions, astronomers established the moon’s age at 4.47 billion years old. According to Ross and Rana, the moon’s younger age (as compared to Earth’s, which comes in at 4.5 billion years old), as well as its composition and lesser (than Earth’s density) seem to fit best with one scenario: a giant impact event.

Around 4 billion years ago, a Mars-sized object struck the Earth with such force as to send up a huge debris cloud, which eventually coalesced to form the moon. This impact also wiped away Earth’s toxic atmosphere, replacing it with a life-friendly atmosphere “thin enough and with the right chemical composition to permit the passage of light to earth’s surface.”

It’s amazing to think that, some 4 billion years later, a man would step onto the residue of a collision event and thereby propel humanity to deeper understanding of the moon and its role in providing a life-friendly home for humanity. Something to think about when gazing at the blue moon tonight.

Some say it’s a “cosmic wink” that the blue moon coincides with the day of Neil Armstrong’s private memorial. We say we’re grateful for the impact of his legacy and how it adds to the evidence for a creatively fine-tuned moon.

Considering Earth's long geological history, the Tibetan Plateau is a never-before-seen geographical feature (see figure). We are living during a unique time when a...
Geology & Earth

In County Clare, Ireland, one of the main sight-seeing destinations is the Burren, a stretch of terrain often described as “lunar” in appearance. The...
Geology & Earth