The foundation for evaluating any science textbook begins with a consideration of the textbook author’s approach to studying the natural world. That methodology will guide how the data is presented and analyzed. Christian curricula generally adopt three different approaches to understanding the relationship between science and Scripture.

1. Compartmentalism: This view considers science and religion as two legitimate realms of knowledge that are best kept apart, with science rooted in facts and religion grounded in faith (see figure 1). 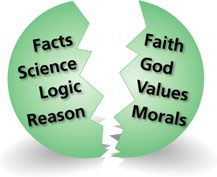 In this perspective, science supplies information about the “how” and “what” of the natural world, while theology provides the “why.” Keeping these realms detached eliminates any pressing need to figure out how biblical details fit with the record of nature.

Christians who affirm theistic evolution often favor compartmentalism. They generally promote the use of mainstream science textbooks and prefer religion be taught as a separate subject.

2. Biblicism: The biblicist approach asserts that the effects of the first sin were so devastating that they impede the non-Christian’s ability to accurately study and apprehend the natural world. Moreover, the cursing of the ground makes nature flawed and, therefore, an inferior revelation to the Bible. For this reason, the record of nature must be interpreted through the lens of the Bible; humans cannot study the natural world on its own terms (see figure 2).

Figure 2: God’s Word furnishes a lens
through which to interpret life and the world.

Young-earth (creation science) textbooks (i.e., A Beka, BJUP, and Apologia) use the biblicist approach. Students are taught to first construct a framework based on the young-earth approach to the Bible and then to interpret the record of nature through that framework.

3. Dual revelationism or concordism: This strategy proposes that God revealed Himself to humanity in at least two ways—through the words of the Bible (special revelation) and the record of nature (general revelation). These two revelations must be integrated in such a way that God’s Word and His world are in complete harmony.

On subjects where both revelations speak, they agree. However, there are topics on which one speaks while the other remains silent. Each revelation may overlap the other, while also revealing unique information (see figure 3). 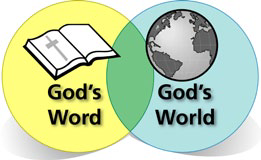 Adherents of the concordist position readily acknowledge that certain interpretations of Scripture will conflict with some opinions from the scientific community. They insist, however, that the truth of Scripture and the facts of science themselves will never actually contradict each other. Human interpretation, not the data itself, leads to perceived contradictions.

Reasons To Believe embraces the concordist approach to science. Although we advance the use of mainstream science textbooks, we also see the value of incorporating biblical material into science lessons where appropriate. With that approach in mind, it is our hope that your students learn all they can about God and His creation, such that they gain appreciation of His care for them.

Teaching Astronomy from a Christian Worldview

For hundreds of years, astronomy played a vital role in the foundation for a solid liberal arts education. While the trend has moved away...
Education

How Do We (and Our Kids) Know God Is Really There?

It’s common for RTB to receive book recommendations, manuscripts, and review copies of books. For the most part we’re unable to review them, but...
Education

Take Up and Read: Fear and Trembling