In the early days of science fiction television, aliens on shows like Star Trek and Dr. Who typically looked like humans with slight feature changes. Some had green skin, some were given antennae, others had enlarged heads, and so forth—nothing too complex thanks to small production budgets. These days, digitally created aliens in Hollywood blockbusters can take on any shape or form, yet many are still presented as anatomically similar to humans, having two arms, two legs, and a head with two eyes, a mouth, and a nose. (Think of Guardians of the Galaxy or Avatar.)

It is difficult for writers to imagine life that is truly different from terrestrial life. The book that gets our award for having the most distinctly original alien life-form is The Visitors. It features benign aliens that look like floating black rectangular boxes that are several hundred feet long. Now that is weird life!

Life as we know it on Earth utilizes molecules built primarily out of carbon. Scientists, however, have contemplated the possibility of “weird life”—that is, alien life based on silicon, rather than carbon. Do the universal laws of chemistry support such a possibility? Before we can answer that, we need to consider why known life is carbon based. (The information presented here is summarized from our longer paper on this subject.)

One of the hallmarks of life is its extreme chemical complexity. All life must be able to absorb nutrients and food, convert food to energy, remove waste, repair or replace body parts, reproduce, and so forth. Such tasks necessitate the existence of a large and diverse collection of complex molecular machines. We infer, then, that any element serving as a basis for life chemistry must be able to support a vast array of chemical structures.

Life chemistry must also be able to form large polymeric structures. This is important for at least two reasons. First, using just a few different building blocks one can generate an endless array of stable but variable and interchangeable molecular forms. For example in terrestrial organisms, proteins are polymers made from about twenty different amino acids. Proteins have to be enormous in order to carry out their precise catalytic functions while simultaneously being specific enough to not react with other molecules. Second, long polymer chains are critical for encoding genetic information. In Earth life, this role is handled by DNA, which is a polymer constructed from just four nucleobases (plus sugars and phosphates). Organisms require an enormous amount of genetic information for reproduction, so the ability to form strands of nearly unlimited length is absolutely vital. Thus, alien life—even weird life—almost certainly requires the ability to form long polymers even if the specific building blocks are different from those of Earth life.

The Life-Essential Properties of Carbon

Chemists have identified at least five major features of carbon that explain why it is uniquely qualified to serve as a basis for life chemistry. Three of these properties are shown in the context of the periodic table (see figure 1).

Taken together, these properties allow carbon to form a wider array of possible chemical compounds than any other element—without exception. For perspective, carbon is known to form close to 10 million different compounds. In fact, the field of organic chemistry, which focuses exclusively on the chemistry of carbon, is far richer and more diverse than the chemistry of all other elements combined. 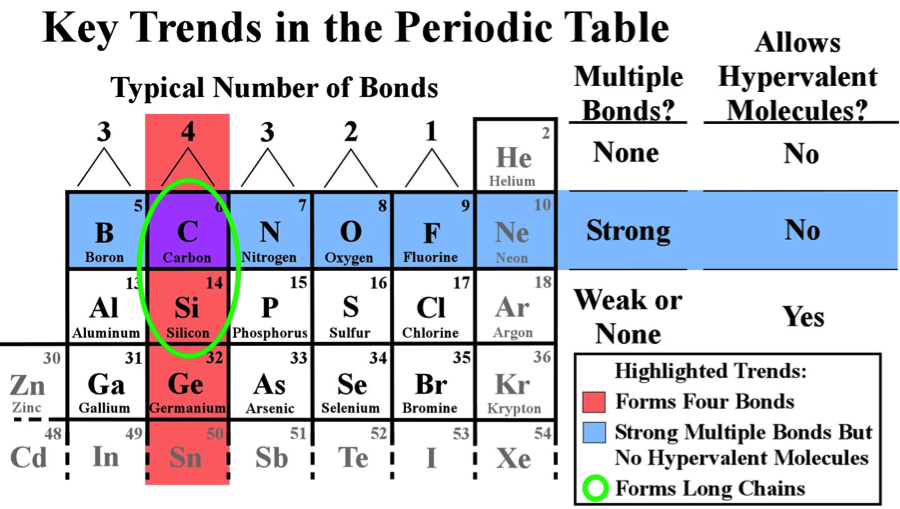 Carbon is limited to forming no more than four bonds, but its cousin silicon can, under certain conditions, form structures with five or even six bonds. These cases are referred to as being hypervalent. While this gives silicon a small advantage over carbon, it comes at a big price—silicon compounds are generally much more reactive than analogous carbon compounds. Because carbon cannot form hypervalent structures, its structures are suitably stable to serve as the basis for biochemistry. Chemists Michael Dewar and Eamonn Healy concluded that this is what makes life possible.1

The Verdict Is In—Carbon Is Special

In 1961, physicist Robert Dicke said it best when he declared, “It is well known that carbon is required to make physicists.”2 Clearly no other element can even come close to matching carbon’s chemical virtues. While those who promote the concept of extraterrestrial life frequently lambast the carbon-only view of life, a working alternative presented in any detail has yet to be presented.3 Biochemist Norman Pace went so far as to suggest that wherever life might be found, it would be subject to the universal nature of biochemistry.4 Or to put it more simply, life we may find elsewhere will most likely have to be carbon-based, and therefore chemically similar (though not identical) to Earth life.

We will continue exploring the possibility of weird life in future articles.

Responding to UFOs in the News

Is the US government interested in the UFO phenomenon again? A recent spate of news reports indicates so. What does this development mean for...
Extraterrestrials & UFOs

The SETI (Search for Extraterrestrial Intelligence) community has defined a Wow! signal as a transmission that is so unusual in its characteristics as to...
Origin of Life & Astrobiology

A Targeted Search for Extraterrestrial Intelligence Found Nothing, Part 1

The goal of NASA’s Kepler satellite mission is to find planets that could host extraterrestrial life and possibly even intelligent life. Hundreds of “Kepler...
Extraterrestrials & UFOs