“Man—despite his artistic pretensions, his sophistication, and his many accomplishments—owes his existence to a six inch layer of topsoil and the fact that it rains.” Author unknown

Maintaining a successful garden or lawn can pose a challenge, but even those of us who never developed a green thumb know that gardening and lawn maintenance require moderate temperatures and an adequate water supply. We take both requirements for granted; yet chemists have discovered that they would both be impossible without water’s exceptional thermal properties.

That is, if water were more like other common liquids, far more-extreme temperatures would beset our planet (see part 4), and the amount of precipitation greatly reduced (explained below). Such a scenario would not only derail gardening and landscaping efforts—it would make any kind of advanced life impossible.

In part 4, we explored the ways these properties act to regulate our planet’s climate, helping make complex life on Earth possible. Specifically, water keeps temperatures over most of the Earth’s surface from becoming too hot or too cold, and from changing temperature too quickly. This, however, is not the end of the story. Even with this moderated climate, life would still be impossible if living creatures couldn’t carefully regulate their own internal temperatures.

The danger of overheating shouldn’t be surprising. For humans, a fever of 40.6°C (105°F)—a mere 3.9°C (7°F) above normal body temperature—is very serious. A few microorganisms can withstand considerably higher temperatures (certain thermophilic bacteria can withstand temperatures up to 122°C (252°F)), but even these have their limits.

High temperatures can damage an organism’s cellular machinery, thus killing it. We observe this damage when frying an egg. Heat causes the egg’s proteins to denature(irreversibly unravel and become non-functional), as evidenced by the egg white’s changing color from clear to white. The denaturing process eliminates the egg’s viability as an egg, essentially “killing” it. The same is true with most protein denaturation in cells and organisms.

Temperature also affects the rate at which chemical reactions happen—and since life processes are chemical in nature, temperature affects life at a foundational level. As a general rule, a reaction will proceed twice as fast for every 10°C (18°F) increase in temperature.3 Many reactions  that largely cease at ammonia’s freezing point (-75°C or -135°F), take place freely at water’s freezing point (0°C or 32°F).4 This, for example, is why we place milk and many other foods in a refrigerator or even a freezer. The cooler temperatures slow down the chemical reactions that cause spoiling, including the life processes of the bacteria associated with most types of spoilage.

All living things require energy to drive their cellular processes (metabolism, reproduction, etc.), and all this chemical activity results in waste heat as a byproduct. If the resulting heat built up, the cell would cook itself to death. In simple fluids, convection currents redistribute heat, but inside cells, complex cellular structures hinder such currents. Fortunately, water’s exceptional thermal conductivity solves this problem, redistributing heat evenly with efficiency.5

To understand why heat conduction is so critical, consider a simple example. Most frying pans are made of metal—an excellent conductor of heat—to insure that the heat from the burner spreads evenly over the surface of the pan. This reduces scorching (too much heat in one spot) and undercooking (too little heat in other spots). In the same way, water protects cells from “scorching” by maintaining uniform temperature.

Ultimately, water’s thermal conductivity helps the cell dissipate its excess heat to its external environment. As heat is lost at the cell’s boundary, more heat from the interior quickly migrates outward. In this way, heat can be eliminated regardless of where it was initially generated.

Temperature Regulation in People and Animals

Temperature regulation is a bigger challenge in people and animals than it is in individual cells. Here again, water’s thermal properties play an essential role.

All organisms must eliminate the excess heat generated by their own bodies, but the task is more challenging for multi-cellular life because neighboring cells surround each other—thus limiting heat’s escape route. To solve this problem, animals’ sophisticated circulatory systems pick up excess heat from the muscles and internal organs and deliver it to the skin layer for dispersion. (In cold weather, the blood vessels near the skin contract to reduce blood flow and prevent too much heat loss.) But blood’s ability to collect and transport heat throughout the body owes its effectiveness to water’s high heat capacity. Without this property, life would have a much harder time keeping body temperatures within the correct range—perhaps it would be impossible.

Eliminating heat in high-temperature conditions or when engaged in vigorous physical activity is another a challenge for advanced life. In cool external temperatures, body heat will naturally radiate to the environment, similar to a cooling cup of hot liquid. Hot external conditions require a different mechanism. Thankfully, water provides an elegant solution—evaporative cooling (also known as sweating).

When moisture on the skin evaporates, it carries away a lot of heat with it. For humans, the moisture appears when our sweat glands generate perspiration (mostly water). Though many animals lack sweat glands, they achieve the same effect by panting, licking or splashing themselves with water. Water’s huge heat of evaporation enables even a small amount of water to carry away enormous amounts of heat. If water’s heat of evaporation were smaller or a different liquid was used as the coolant, evaporation would be less efficient and would require a greater loss of fluid.

As expressed in the opening quote, we—along with all plants and animals—owe our lives to rain. Without a regular supply of fresh water (rain, runoff from snowmelt, etc.), terrestrial plants would die and Earth’s continents would look like barren deserts. Loss of plant life would also devastate land animals.

The water cycle (or hydrologic cycle) involves a continuous movement of water between the oceans, atmosphere, and land (see figure 1 for a broad overview).7 For the purposes of this article, we will focus on the four primary stages. 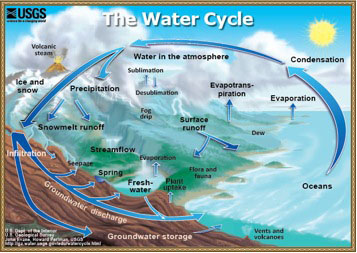 An efficient water cycle supports life by replenishing fresh water in lakes, helping to balance global temperatures by cooling the tropics and warming cold climates, providing global transport and concentration of salts and minerals, and transforming the geological strata through erosion. Of course, we’ve long known the water cycle’s importance for life; but most people may not realize how critical the design of water is to the cycle. In other words, if water’s properties were similar to those of other common liquids, then the water cycle would be greatly diminished and its life-supporting effects greatly reduced.

To begin, a significant water cycle requires large quantities of liquid water. On Earth, water is the only naturally occurring, inorganic liquid found in abundance8 due, in part, to its chemical stability (non-reactivity). To put it simply, once formed liquid water tends to stay around. (Contrast water with ammonia—the closest analogue to water and its thermal properties—which is not naturally found in abundance because of its reactivity.) As we observe elsewhere in the galaxy, retaining water and keeping it in a liquid state is by no means guaranteed for a planet (more on this in part 7).

Water’s vapor tension (or maximum vapor pressure),9 another critical factor to consider, determines how much water air can hold at a given temperature. If water’s overall vapor tension were lower, Earth’s atmosphere would contain less water and, consequently, less rain and snow would fall. Additionally, the rate at which vapor tension changes with the temperature plays an important role in precipitation. As warm, moist air progressively cools, the decreasing vapor tension lowers the air’s ability to hold the water in a vaporous state, thus causing the water to condense out and produce precipitation of one form or another.10 The heat of evaporation is the principal factor governing how rapidly vapor tension changes with temperature.11 Since water has the largest heat of evaporation, its vapor tension increases more rapidly with increasing temperature than do those of other liquids.

In his analysis of water, Henderson recognizes that water plays a critical role on Earth in at least three distinct ways:

First, it [water] operates powerfully to equalize and to moderate the temperature of the earth; secondly, it makes possible very effective regulation of the temperature of living organisms; and thirdly it favours the meteorological cycle. All of these effects are true maximum, for no other substance can in this respect compare with water.12

We strongly concur with this conclusion. Yet, even now, we have not come close to exhausting all of water’s exotic capabilities.

In part 6 we will turn our attention to water’s non-thermal properties.

Not only are magnets fun to play with, they play prominent roles in humanity’s just-right habitat. Magnetic fields affect the way stars and galaxies...
Geology & Earth

Two Japanese planetary physicists have found more evidence that supports the supernatural design of Earth for life. They discovered that the presence of a...
Geology & Earth