Guest writers John Millam, Ken Klos, and Iain D. Sommerville return with their series on the uniqueness of water. Up to this point, the authors have been describing a general theoretical basis for understanding water’s life-essential properties. Here in part 4, the authors turn our attention to specific ways those properties are ideally designed for life.

From a chemical viewpoint, the most fascinating thing about water is that it is unique. In many of its properties, water differs from similar compounds and has values outside the normal range. It is just these differences that make water so ideally suited for its role in the earth’s life support system.1

Last month we began our exploration of water by highlighting the water molecule’s bent shape (part 1) and the importance of hydrogen bonding (parts 2 and 3). Using this foundation, we can now discuss water’s specific properties. Parts 4 and 5 will focus exclusively on water’s thermal characteristics (those dealing with heat and temperature); part 6 will cover the remaining properties and part 7 will discuss the availability of liquid water in our solar system.

In 1913, Lawrence Joseph Henderson published the first study demonstrating quantitatively that water’s properties, including its thermal characteristics, are distinctly beneficial for life.2 Among them are water’s high melting and boiling points (part 2) and expansion upon freezing (part 3); others include,3

To help those unfamiliar with these four properties, we will define each one in the context of its role in moderating global climate.

Thus, water’s high heat capacity insures that water temperatures remain stable and don’t change too rapidly—making water supremely suitable for global climate stabilization. If water were like most compounds (having a much smaller heat capacity), the result would be more-extreme differences in water temperature between summer and winter and between day and night—causing more-severe weather disasters.

This high heat capacity also enables water to store and transport enormous quantities of heat. For example, when oceans absorb heat, the ocean currents help to redistribute it (see figure 1). The currents carry warm water away from the equatorial regions and deliver it to the colder regions near the poles.4 Having released their heat, the cold return currents help cool the equatorial regions. This heat transfer process, dependent on water’s high heat capacity for effectiveness, results in a more even distribution of heat, reducing temperature differences around the globe. 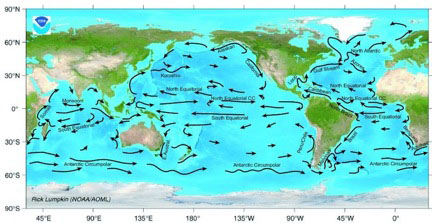 Ocean currents also play a role in moderating land temperatures, particularly for coastal regions. For example, thanks to the Atlantic Ocean’s Gulf Stream, northern Europe (most notably, England, Ireland, and Iceland) is considerably warmer than other regions at similar latitudes.

The heat of melting is a measure of the heat needed to melt something. This measurement is also known as the heat of fusion because it simultaneously governs the reverse process (converting liquid into a solid). Water’s exceptionally high heat of melting helps protect Earth’s glaciers from melting. It also keeps oceans and most lakes from freezing completely. Both features are critical for aquatic life.

As water cools, its temperature decreases until it reaches its freezing point (0°C or 32°F for pure water). Further cooling, however, will not lower the temperature until all of the water freezes. Because oceans and large lakes are too big to freeze completely solid, their temperatures will never drop below water’s melting point. As noted in part 2, water’s melting point is exceptionally high. These two factors combine to ensure that oceans and most lakes never become too cold to support aquatic life.

Evaporation plays a critical role in preventing lakes and oceans from becoming too hot. Sunlight imparts a lot of heat to water and, consequently, raises its temperature. Without a mechanism to shed most of this heat, many (perhaps all) bodies of water would become too hot for most marine life.

Earth avoids this hellish fate because of evaporative cooling’s efficiency. A portion of the liquid water is converted to water vapor, which carries away a lot of heat and cools the remaining water. To put this phenomenon in perspective, consider that the tropical oceans lose an estimated 2.3 meters of water per year due to evaporation—which amounts to the absorption of about 1,000,000,000,000,000 (one quadrillion) calories per square kilometer (or about 2.6 quadrillion calories per square mile)!5 In the case of lakes, evaporative cooling typically restricts the actual daytime temperature increase to only about 0.6°C (1°F) per hour.6

Water’s high heat of evaporation also provides another mechanism for moderating global temperatures. Evaporative cooling in the tropics results in warm, moist air. Similar to ocean currents, wind transports that air to higher latitudes to the north and south, where it helps warm colder climates. This transfer of heat from hot to cold regions helps balance world temperatures. Hence, without evaporative cooling, planetary temperatures would be subject to far greater changes.

Water is a remarkably good conductor of heat. In fact, its thermal conductivity is the highest of all liquids. A high thermal conductivity means that, rather than building up in a single location, excess heat will spread out quickly and distribute itself evenly. This characteristic of water is yet another means of moderating global temperature. Rather than heating or cooling only the surface, water moderates temperatures throughout the body of water by readily transmitting the heat it absorbs or loses to subsurface water. Therefore, raising the surface water temperature requires more heat and lowering them requires losing more heat.

Curiously, while liquid water is an excellent conductor of heat, solid ice is a thermal insulator. When ice forms over the surface of lakes, it traps heat like a thick coat or blanket, thus protecting the lake from further cooling (see part 3). Ice’s effectiveness as a thermal insulator also makes water ideal for supporting life.

Even this brief survey is sufficient to demonstrate the truth of the opening quote—water is the ideal substance for maintaining a planetary climate suitable for sustaining life. And water is able to do this only because of its exceptional ability to moderate heat more efficiently than other liquids. Without water and its unique properties, the entire planet would be subject to far more-extreme and rapidly varying temperatures. These extremes certainly would have prevented Earth from hosting any kind of complex plant or animal life. Even microscopic life would have been significantly limited.

Though we described each property individually, it should be noted that these characteristics actually work in concert and their effects reinforce one another. For example, the air currents’ effectiveness in moderating temperatures depends on both the heat of evaporation and heat capacity. If even one of water’s thermal properties had been lower (as with other common liquids), then complex life would not have been possible here on Earth or elsewhere. (An extensive discussion of the ways these properties work together can be found elsewhere.7) Nothing else could substitute for water because no other substance even comes close to matching all of water’s amazing thermal properties, much less its other unique characteristics. Clearly, water is designed for life.

The Role of Short-Lived Radioisotopes in Creating Life

New observations and simulations reveal design in the behavior of Earth’s magnetic field. A measured decline of the magnetic field strength since 1840, coupled...
Geology & Earth