In part 3 of this series on water, guest authors John Millam, Ken Klos, and Iain D. Sommerville explain how ice stays afloat and what this remarkable feature of water means for life on Earth.

“tip of the iceberg Fig. only the part of something that can be easily observed, but not the rest of it, which is hidden. (Referring to the fact that the majority of an iceberg is below the surface of the water.)…” The Free Dictionary by Farlex

Ships’ captains know to be wary of icebergs, the visible portion of which often belies the unseen mass beneath the ocean surface. Icebergs can make maritime travel tricky (just think of the RMS Titanic), but if ice didn’t float it would pose an even greater threat to advanced life. For example, in cold climates, ice forms over the top of lakes, rivers, and arctic oceans rather than at the bottom. This ice layer then acts as an insulating “blanket” that helps keep the rest of the water from freezing. If ice sank, it would accumulate until all of the water froze and killed the aquatic life inhabiting those bodies of water.1 Fortunately, solid water (ice) is less dense than liquid water—making it possible for ice to float. You might say this astonishing ability is just the tip of the proverbial iceberg of water’s remarkable properties.

In this series, we are exploring water, one of creation’s greatest wonders. As we saw in part 1, water is essential for life. Specifically, we explored how water’s molecular structure explains its amazing ability to dissolve more substances than any other solvent. In part 2, we described the hydrogen bonding between different water molecules and showed how this results in water remaining a liquid (rather than becoming a gas) at room temperature. Today, we extend our discussion of hydrogen bonding to explain water’s ability to expand when it freezes.

A Quick Review of Hydrogen Bonding

Hydrogen bonding is a special type of intermolecular force that can take place between adjacent molecules. To create a hydrogen bond, you need a “donor” atom (generally N, O, or F), a hydrogen atom bonded to the donor, and an “acceptor” (again N, O, or F) with a lone pair of electrons. The donor’s hydrogen receives a partial positive charge, which is then attracted to the negatively charged lone pair on the acceptor. Finally, these atoms must be arranged in a near linear fashion (see figure 1). Hydrogen bonding’s linear nature is central to our discussion here in part 3. 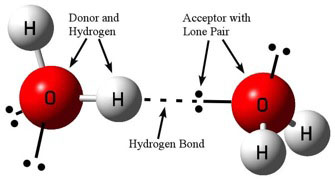 To begin, we need to understand the relationship between temperature and density. When we heat a substance, the molecules gain more energy to move around, thus creating thermal expansion (in which heating objects makes them expand while cooling makes them contract).2 The expected result is that the solid will be denser than the liquid, which will, in turn, be denser than the gas. However, water is virtually unique in that solid ice is less dense than liquid water. We know of only a few other examples of this behavior (e.g., molten silica, a component of glass, and some metals that form a tetrahedral coordination). However, none of these other substances meets any of the requirements necessary to serve as a medium for life.

Water’s exceptional behavior results from its natural tendency to form a network of hydrogen bonds. As a solid, water behaves as a crystal held together solely by hydrogen bonds. Ice forms a hexagonal lattice structure (see figure 2) that allows it to maximize hydrogen bonding’s highly directional interaction. Note, in figure 2, the large open shafts in the crystal lattice. This cage-like structure takes up 9 percent more room than the more disordered liquid state, in which some of the hydrogen bonds break. As a result, water’s density decreases dramatically as it changes from a liquid to a solid (see figure 3; the vertical line between “Water” and “Ice” shows how dramatic the change is).

Figure 2: Hexagonal lattice in solid ice—(a) top view and (b) side view. For clarity, water’s hydrogen atoms are not shown, but they would be located along the “bonds.”
Image credit: John Millam

Due to ice’s lower density, water expands as it freezes. I (John) witnessed a demonstration of this principle while in college. My roommate put a can of Pepsi in our refrigerator’s freezer compartment to cool the drink quickly—then forgot about it. When the water inside the can began to freeze, it expanded, causing the can to burst at the seam and coat the entire inside of the refrigerator with soda. Time’s perspective has made this incident funny, but it wasn’t so humorous when it happened. 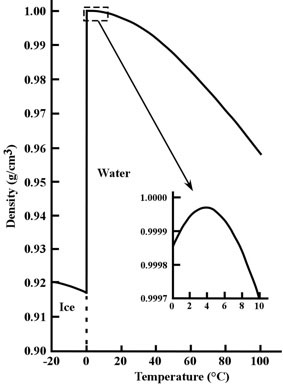 Remarkably, pure water reaches its maximum density at 4°C (39°F) above its freezing point (0°C or 32°F)!3 water cools it contracts slowly (becomes more dense) just like other liquids—but upon reaching 4°C, the trend reverses. At this point, water actually begins expanding (becomes less dense) when cooled further (see inset graph of figure 3). This behavior is nearly unique among all chemical substances known to humanity. When water reaches its freezing point (0°C), it turns to ice and rapidly becomes even less dense.

A consequence of hydrogen bonding, this unique behavior occurs when near-freezing liquid water forms small ice-like clumps with a lower density than the surrounding water.4 As the water continues cooling, more low density clumps form, counterbalancing the normal contraction and causing the overall density to decrease until the freezing point is reached. While this odd behavior may seem inconsequential, it actually plays a key role in the maintenance of freshwater lakes.

During the summer months, the warmest (least dense) water sits on top and the colder (more dense) water remains near the bottom of the lake. This bottom layer, however, will not drop below 4°C because water is densest at that temperature. In the winter, this situation reverses. The coldest water (0–4°C) sits on top, possibly covered by a layer of ice. The warmest water (4°C) settles at the bottom of the lake, creating a refuge for aquatic life during the cold months.

This temperature inversion between summer and winter plays a key role in the biannual turning over or churning of the waters.5 To understand what this is and why it is important, let’s consider first what happens in the absence of turnover. A typical lake stratifies naturally into three distinct layers (see figure 4) according to temperature and, correspondingly, density—the epilimnion (upper waters), thermocline or metalimnion (middle waters), and hypolimnion (deep waters). Stratification prevents vertical mixing between layers. As a result, the bottom waters will become increasingly anoxic (oxygen deficient) because winds are unable to circulate the oxygenated upper waters all the way to the bottom of the lake. At the same time, decaying plant and animal matter produce hydrogen sulfide (H2S) and various other sulfurous gases, which remain trapped near the lakebed. If this situation persisted too long, the deeper waters would become uninhabitable for fish and other aquatic life.6 Turnover averts this problem thanks to water’s unique behavior. 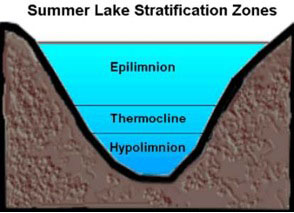 During a typical lake’s seasonal cycle (see figure 5), the warmest water sits at the top layer during the summer months, but as seasons and weather change, the top layer cools (becomes more dense) and sinks. The water does not get colder uniformly; rather it gradually accumulates at 4°C (maximum density for water). When the lake reaches a near-uniform temperature around mid-fall the stratification breaks down. When this happens, surface winds can cause currents to circulate to the full depth of the lake. A “rotten egg” smell usually accompanies lake turnover due to the sulfurous gases dredged up from the bottom. As the season moves toward winter, the top water layer will cool below 4°C while the bottom remains at 4°C. This process reverses itself when the weather starts warming up again. Around mid-spring, the water will again reach near-uniform temperatures and the spring turnover will occur (see figure 5). 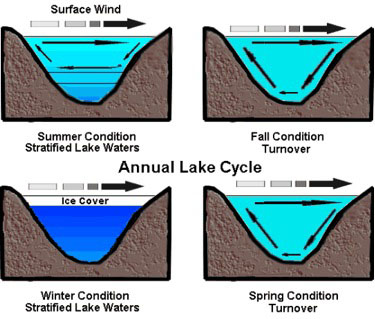 Figure 5. Annual lake cycle showing the different water layers and the churning of the waters by the wind.
Image used with permission: Keith C. Heidorn, PhD, The Weather Doctor.

Water displays extraordinary behavior while freezing. But this exceptional behavior goes beyond mere oddity—it’s vital for life in at least three distinct ways.

In part 4 of this series, we will explore more of water’s exceptional properties and the implications this exceptionality has for life. We’ve already demonstrated that water is truly “designed for life,” yet there are still many more design features to explore!

Search for Planets Draws a Blank

Is the universe really rife with life sites, as Carl Sagan asserted?1 Research data continues to shape an answer to this question, but the...
Extraterrestrials & UFOs