“Ocean, n. A body of water occupying about two-thirds of a world made for man—who has no gills.” Ambrose Bierce, The Devil’s Dictionary

It’s easy to take Earth’s oceans for granted. These large bodies of water are a familiar sight—covering more than 70 percent of the planet’s surface. The mere presence of liquid water (oceans, lakes, and rivers) plays a critical role in supporting life. Given the rarity of even trace amounts of liquid water in our galaxy, its abundance on Earth reflects amazing fine-tuning of our planet and solar system (a topic we will address later in this series). Today, we will examine the more-immediate question of why it is possible for water to be a liquid (rather than a gas) at ambient temperatures.

In part 1 of this series, we examined water’s molecular structure. Each water molecule consists of two hydrogens covalently bonded (via two pairs of shared electrons) to a central oxygen atom. These covalent bonds are extremely strong and hold the molecule together. Here in part 2, we will switch from considering intramolecular forces(bonding between atoms in the same molecule) to intermolecular forces (attractions between different molecules).

Consider the countless numbers of individual water molecules in a glass of water. These molecules are bound together by a web of attractive intermolecular forces to form a liquid. The nature and strength of these forces determine the macroscopic properties of water, such as its boiling point.

Of course, if the intermolecular forces are too strong (at a given temperature) the molecules will bind together to form a solid rather than a liquid. This corresponds to the melting point. In order for much of the earth to be covered in liquid water, the intermolecular forces must be strong (much stronger than would be expected for a small molecule)—yet not too strong.

There are several types of intermolecular forces—but only hydrogen bonding is critical to our current discussion. Despite its name, a “hydrogen bond” is not a true chemical bond (since no electrons are shared). Rather, it is a special type of electrostatic attraction. A hydrogen bond is analogous to two magnets sticking together because their opposite poles attract. Hydrogen bonds function as a strong bridge or connection between neighboring molecules so that they stick together (e.g., causing water to behave as a liquid rather than a gas at room temperature). And since hydrogen bonds are nowhere near as strong as true chemical bonds, they can easily break and reform (similar to the separation and reconnection of magnets).

Two noteworthy characteristics of hydrogen bonds are worth mentioning here. First, they are strong compared to the other intermolecular forces for small molecules. Thus, they play a major role in determining water’s properties.1 Second, unlike the other intermolecular forces, hydrogen bonds form only when certain conditions are met. Consequently, substances that contain hydrogen bonds display significantly different behavior and properties when compared to similar molecules that lack these bonds.

Forming hydrogen bonds requires one atom to act as a hydrogen “donor” and an adjacent atom to act as an “acceptor.”2 The donor atom must be a highly electronegative atom bonded to a hydrogen atom.3 Of all the elements, only nitrogen (N), oxygen (O), and fluorine (F) are sufficiently electronegative to permit significant hydrogen bonding. The acceptor atom must likewise be highly electronegative (again primarily N, O, or F) and possess a “lone pair” of electrons (two electrons that are not involved in covalent bonding). The donor causes its hydrogen atom to have a partial positive charge, which is then attracted to the negatively charged lone pair on the acceptor. Lastly, the donor, its hydrogen, the acceptor, and its lone pair must all be arranged along a nearly straight line (see figure 1).4 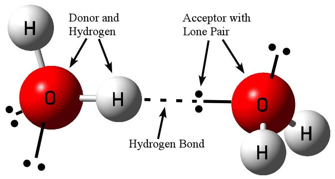 To understand how important hydrogen bonding is, it is helpful to compare the boiling point of water to those of closely related compounds. Water is a hydride of oxygen—an element bonded to an appropriate number of hydrogen atoms (two hydrogens in the case of oxygen). Therefore, we will compare it to hydrides of elements located close to oxygen in the periodic table. Figure 2 shows the boiling points of these hydrides, with lines connecting elements of the same “family” (belonging to the same column of the periodic table).5

If we ignore for a moment three anomalous boiling points—those of water (H2O), ammonia (NH3), and hydrogen fluoride (HF)—we see a clear trend of boiling points increasing toward the right. This is the result of another intermolecular force (called London dispersion), which increases in strength as the number of electrons increases. From this, we can extrapolate what the approximate boiling points of the anomalous three—H2O, NH3, and HF—would be if hydrogen bonding were not present (see red dashed lines in figure 2).

If water didn’t possess hydrogen bonding, we would expect it to reach the boiling point around -100 °C (-148 °F)—rather than 100 °C (212 °F). This is an enormous difference! The equivalent graph for melting points (not shown) follows a similar trend. Clearly, without hydrogen bonding, water would be a gas at normal temperatures and so could not serve as a medium for cellular processes. Neither would there be rivers, lakes, or oceans—not to mention people! 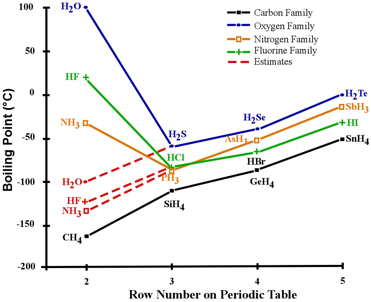 The boiling points of water, ammonia, and hydrogen fluoride are clearly exceptional when compared to those of other similar hydrides. But water’s high boiling point stands head and shoulders above these two nearest competitors in exceptionality. This difference merits a more detailed look. 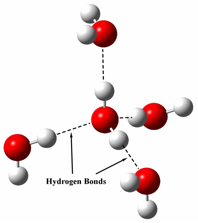 From a chemist’s point of view, water is absolutely astonishing. Given its simple composition, we would expect it to be a gas at ambient temperatures, yet it is a liquid. In fact, it is the only naturally occurring, inorganic liquid found in abundance.8 Moreover, we owe our life to this fact because without liquid water life would be impossible. In our opinion, there is no doubt that the Creator designed the water molecule to fulfill its unique and crucial roles in supporting life.

In the remaining parts of this study, we will point out still more evidences from water for the Creator’s role in our existence

Miracles of the Mid-Pleistocene Transition, Part 3

About 800,000 years ago, a miraculous change took place on Earth. The ice age cycle transitioned from happening every 41,000 years to about every...
Biology

Disaster movies seem to be a staple for Hollywood. One such disaster movie that I found enjoyable (enough to watch it four times on...
Geology & Earth

The Perils of Space Travel