Throughout May and June, we will be presenting an article series from guest writers John Millam, Ken Klos, and Iain D. Sommerville on the amazing properties of water. In part 1, the authors discuss the nature of water’s solvation ability and its importance for sustaining life on Earth.

Water is a simple triatomic molecule, but its behavior is very complex. No chemist, biologist, or physicist would dare to say that water has been thoroughly studied or that how it functions on a molecular scale in either living or nonliving systems is completely understood.1

Water is the substance of life. It makes up about 60 percent of the human body. Without this precious liquid, we would all die. Yet it is so ubiquitous on Earth that we often take it for granted, failing to recognize its significance.

Everything around us, from the tiniest cell to the planet’s climate, is influenced by water. For example:

In this series, we intend to explore the question: Why is water so uniquely necessary for our existence?

Water as the Universal Solvent

Water ranks as one of the simplest molecules (consisting of only three atoms: one oxygen and two hydrogen molecules), yet its behavior is rich and complex. For example, it plays a greater and more diverse role in living and non-living processes than other more-complex molecules.

Sometimes referred to as the “universal solvent,”4 water can also dissolve more substances and in greater quantity than any other solvent. In this first article (in a series of 7), we will explore the connection between water’s versatile solvation ability and its finely designed molecular structure.

Chemists have long been aware of the astonishing quantity and diversity of compounds that water could dissolve. In 1913, Harvard biochemist Laurence Henderson published the first quantitative look at the biological relevance of water’s exceptional properties.5Henderson presented an analysis of the main components of both blood serum and urine.6 Even that limited survey led him to conclude that,

It cannot be doubted that if the vehicle of the blood were other than water, the dissolved substances would be greatly restricted in variety and quantity, nor that such restriction must needs be [sic] accompanied by a corresponding restriction of the life processes.7

Modern chemists have since expanded our knowledge of water’s solvent capacity, which has served to reinforce Henderson’s conclusion.

Henderson highlights another reason water’s solvent ability is indispensable for life: the global transport and distribution of salts and minerals.8 To begin with, water plays a major role in breaking down rocks.9 This erosion releases salts and vital elements into the environment. (Erosion is also the first step in creating soil.) Water then acts to mobilize these substances by dissolving them and carrying them down slopes into streams, lakes, rivers, and oceans, all of which may deposit these substances as sediments at various places. Henderson reports that in a given year, the world’s rivers collectively transport approximately 6,500 cubic miles of material—corresponding to five billion tons of dissolved mineral matter, as well as prodigious amounts of sediment.10 All of these minerals are ultimately delivered to lakes, rivers, and oceans, where they are available to both aquatic and terrestrial life. This cycle has been ongoing throughout Earth’s history.

The biological impact of this activity should not be overlooked. All life depends primarily on four elements (carbon, nitrogen, oxygen, and hydrogen), yet also requires small amounts of a variety of other elements. Iron, for example, is essential in certain key proteins, such as hemoglobin (which transports oxygen in blood). Some of these micronutrients, such as molybdenum and arsenic, are referred to as “vital poisons” because we must have them in trace amounts, yet in larger quantities they can be quite toxic.11

The Structure of Water

How do we account for water’s extraordinary potential as a solvent? Chemists have answered that question by examining water at a molecular level. Water’s solvation ability can be understood in terms of four key properties, described below.

The water molecule’s bent shape, with a 104.5° angle between its three atoms (see figure 1a), is one of its most noticeable features. At first glance, one might expect water to be linear so that the two hydrogens can be as far apart as possible. However, the oxygen atom’s four electrons—arranged in two lone pairs and uninvolved in bonding—also repel the hydrogens, thus forcing them to move closer together and form an approximate tetrahedral arrangement (see figure 1b). An ideal tetrahedral arrangement has angles of 109.5° (as seen with methane, CH4), but water’s angle is just a bit smaller (due to the presence of the electron pairs). The valence shell electron pair repulsion (VSEPR) theory provides a more-detailed explanation of water’s bent shape.

Figure 1: The structure of water showing (a) the angle between the three atoms and (b) showing the two electron lone pairs.
Image credit: John Millam

Another important aspect of water’s structure is the polarity of the covalent bondsbetween the central oxygen and its two hydrogens. In molecular bonds there is a tug-of-war between the atoms for possession of the bonding electrons, with the more electronegative element having the greatest pull. Oxygen’s higher electronegativity13means that the electrons spend more time on this atom than on the hydrogen atoms. As a result, the oxygen has a partial-negative charge and the hydrogens have partial-positive charges (see figure 2). This charge separation is known as bond polarity. 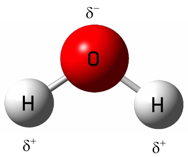 If water were linear, the polarity of the molecule’s two bonds would cancel each other out, leaving the molecule nonpolar. And if this were the case, our story would end here—because water would be a poor solvent and wouldn’t be very useful. Instead, its bent shape gives water a partial-positive charge on one (hydrogen) side of the molecule and a partial-negative charge on the other (oxygen) side (see figure 2). This natural separation of charge is known as a permanent dipole moment. Water has the second largest dipole moment of all small molecules (exceeded only by hydrogen fluoride).14

Water’s large dipole moment plays a central role in its ability to act as an effective solvent. For ionic compounds (e.g., salts), water’s negative (oxygen) side interacts strongly with positive ions, and the positive (hydrogen) side with the negative ions, thus pulling them into solution (see figure 3a). In a similar way, water can strongly interact with the partial charges on other polar molecules to dissolve them (see figure 3b

In contrast, water cannot readily dissolve nonpolar molecules because it cannot strongly interact with them. Oils (hydrocarbons) are the classic example. This phenomenon of oil clumping together rather than dissolving in water is referred to as the hydrophobic effect and led to the expression “oil and water don’t mix.”

Water’s inability to dissolve these oily compounds may seem like a defect, but we see this characteristic as part of water’s design for life because it is necessary for the development of cell walls.16 Lipids (fat molecules containing long hydrocarbon side-chains) self-assemble naturally into cell walls due to the hydrophobic effect. Cell walls are crucial to the proper functioning of every living thing. They separate the cell from most everything that surrounds it, yet selectively allow certain nutrients and minerals inside the cell wall, or discharge waste products through carefully controlled channels.

To illustrate this, consider the case of ordinary table salt (NaCl) and its oppositely charged component ions (Na+ and Cl–). In solvents with a low dielectric constant, the electrostatic attraction between the ions would make it difficult to separate them and prevent the salt from dissolving. In water, however, both Na+ and Cl– are completely surrounded by a layer of water molecules, weakening the electrostatic attraction between the ions. Water’s tendency to surround other substances makes it energetically favorable for separating salts and other ionic species into distinct ions, thus resulting in their dissolution (see figure 3a).

To help understand this significance, consider amino acids (the building blocks of proteins). They are polar molecules and so should dissolve in water, but their large size greatly reduces their solubility. This obstacle could limit their presence in biological systems; however, their capacity for self-ionization greatly increases their solubility. In self-ionization, one side of the molecule loses a hydrogen ion (H+) and the other side gains one (see figure 4). The net result is two charge centers (one positive and one negative) that the water can latch onto easily and then pull the amino acids into solution. This self-ionization is energetically favorable only in solvents with a high dielectric constant, like water. Without this high dielectric constant, proteins and other large biomolecules would be only marginally soluble, making life in any form impossible.

Figure 4: Self-ionization of the amino acid alanine.
The natural (unionized) form is on the left and the ionized on the right. The dashed line illustrates the transfer of the hydrogen from the oxygen to the nitrogen.
Image credit: John Millam

It is well understood that water molecules are bent. Nevertheless, it is good to acknowledge that this angle is vital to water’s design. If water were to lose its bend (i.e., straighten out so that the three atoms formed a line), then the polarity of its two bonds would balance (cancel) each other out. This would render water nonpolar even though its bonds are polarized. Consequently, water would have no dipole moment, a small dielectric constant, and it would be a poor solvent. Water’s other properties would be affected as well, but we will explore each of those in subsequent parts of this series.

Conclusion
Today, we have explored four aspects of water’s molecular structure. Individually, these features might seem unremarkable—but collectively they produce an extraordinary molecule. From them we can understand why water is the solvent par excellence and absolutely indispensable for life. In subsequent articles, we will explore more of water’s amazing design features and discuss why they are so critical for life here on Earth.

From the Big Bang to Humans

Life abounds on planet Earth. We are familiar with numerous forms, like people, pets, insects, and fish. Using microscopes, we see a host of...
Design

Scientific advances continue to demonstrate our improbable planet’s fine-tuned features. In a recent issue of Science, a team of scientists led by Francis Macdonald...
Evolution

Climate change discussions can range from casual to serious, from dismissive to alarmist. But how many people talk about Earth’s current period of extreme...
Geology & Earth