Archeological and DNA evidence places the origin of humanity in eastern and southern Africa 50,000–150,000 years ago. Evidence for the earliest villages and towns, specialized agriculture and manufacture of household goods, and trade places the origin of civilization in the Persian Gulf region and Mesopotamia about 12,000 years ago. The biblical accounts of the Garden of Eden and Noah’s flood imply that humans were living in the Persian Gulf region during much of the last ice age. Antarctic and Greenland ice cores establish that the last ice age persisted from 12,000 to 120,000 years ago.

Genesis 1–2, Matthew 19, and Romans 5 declare that all of humanity is descended from one man and one woman. These biblical sources also imply that the original human couple most likely began their existence in the southeastern part of what is now the Persian Gulf.

For all this scientific and biblical data on human origins to be consistent, there must have been an easy route that, at some time or times during the last ice age, facilitated rapid migration between eastern Africa and the Persian Gulf region. Because sea levels during the last ice age were 100–350 feet lower than at present, a water barrier would not have prevented these migrations. Most of what is now the Persian Gulf and the Red Sea was dry land at that time. Because the southwest tip of Arabia was connected to the Horn of Africa, humans could have walked from the Persian Gulf region into Africa and vice versa (see figure 1).

The biggest barrier to human migration between Africa and the Persian Gulf-Mesopotamia region is Rub’ al Khali (the “Empty Quarter”). Rub’ al Khali is an enormous sand desert encompassing the southern third of the Arabian Peninsula. It is nothing but sand, gravel, and gypsum in a region measuring 1,000 km x 600 km. With an average daily maximum temperature throughout the year of 47°C (117°F) Rub’ al Khali has been impassable until the advent of modern transportation technology. 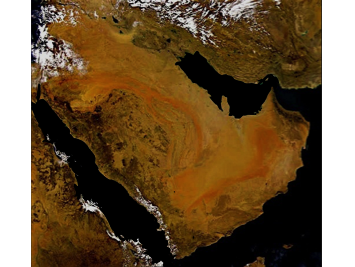 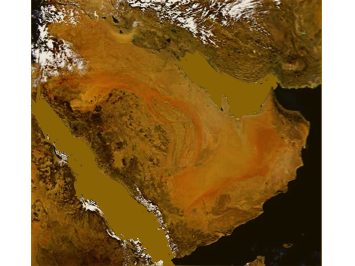 A recent study of alluvial fan deposits in Rub’ al Khali reveals that the region has not always been so inhospitable. A team of seven geologists found that drainage systems in the region were activated at three different times: 150,000–160,000 years ago; 75,000–130,000 years ago; and about 55,000 years ago.1 They noted that these three epochs correspond to known episodes of monsoon activity in the region. During these epochs Rub’ al Khali would have been humid, much cooler, and laced with lakes and rivers. Under such conditions regional vegetation would have flourished.

The availability of fresh water and local vegetation would have made human migration across the Arabian bridge not only easy but inevitable. Genesis 2:13 describes the Gihon River flowing out from the mountains of Cush into the Garden of Eden. Cush is normally identified with the mountainous region within and surrounding Ethiopia. However, during the last ice age, that mountainous region would have included the mountains in the southwest tip of the present-day Arabian Peninsula. Satellite imagery reveals a dry riverbed extending from that southwest tip into the southern part of the Persian Gulf. That river, flowing with water and with abundant food plants growing along its banks, would have presented an inviting transportation corridor connecting the Persian Gulf region to eastern Africa.

In addition to the three monsoon epochs, brief episodes of rapid ice-melt on the mountains of Arabia watered Rub’ al Khali. Thus, during the last ice age (12,000 to 120,000 years ago) there would have been several opportunities for humans to migrate rapidly between the two regions. Given the strong textual clues in Genesis that both the Garden of Eden events and Noah’s flood occurred during an ice age,2 there is every reason to conclude that the biblical, genetic, and archeological data on human origins and early history is fully compatible and self-consistent. Given, too, that the first migration over the Arabian bridge likely involved just a few individuals or a single family, we should not be surprised at the lack of archeological and DNA evidence for this first migration or for the first human families.

A Burst of Creativity

The Earth is filled with music, all kinds of music, from the new “ambient” sounds to the more familiar genres, such as bluegrass. (Don’t...
Human Origins & Anthropology

Recent scientific discoveries have opened up a whole new world where mere humans may be able to alter the genetic makeup of any organism...
Biology

Vanishing acts have played a role in magic spectacles for centuries. But what might be good entertainment in a theatre is no laughing matter...
Human Origins & Anthropology