When I was growing up, I came across a stack of comics at my grandma’s place and was immediately drawn to the cover artwork. One series, The Crusaders by Jack Chick of Chick Publications fame, was my initiation into apologetics.

I still recall vividly one edition titled The Ark. The visual impact of people clinging desperately to rocks on mountaintops against the backdrop of waves and wind has stuck with me all these years. Much later I wondered: “Could something of such extraordinary proportions truly have happened the way it was described in Genesis 7?”

Today, as a geologist I have been thinking about what would be needed to produce Noah’s flood. In this short article I will consider three requirements:

RTB’s position, based on biblical and scientific evidence, is that the flood of Noah was universal (affecting all humans) but not global. This view posits that humanity prior to the flood had settled within the boundaries of Mesopotamia and the Persian Gulf Oasis (Gen. 1–9), and only spread to other geographical regions after the flood (post Gen. 10). Annihilation of sinful man thus involved only flooding the known world—kosmos tote—at that time (2 Pet. 3:6) in a localized setting. (See Navigating Genesis1 chapters 13–18 for a more detailed explanation and how RTB’s model differs from a global flood model.)

Local scale notwithstanding, God’s use of the power of nature to destroy all humanity in a matter of months is nothing short of spectacular and, in the minds of skeptics, unbelievable. However, by carefully inspecting each individual description through a geoscientific lens, I present a plausible model that could account for Noah’s flood.

The first key question is “where did so much water come from?” Intuitively, one looks at the oceans, the most significant source of water. The total amount of water in oceans and seas shares a dynamic relationship with ice sheets. That is, more solid landlocked ice translates to less liquid water in oceans and seas, and vice versa. This feature means the ice mass fluctuates over time through ice melt. The main driver of ice sheet melt is solar insolation (exposure to sunlight), which on long timescales is influenced largely by the behavior of Earth’s orbit and rotation, which in turn drives the melting and freezing of water on Earth. The dominant sea-level signal over the last 800,000 years is the 100,000-year ice cycle (figure 1). The cycle shows that sea-level change during glacial (ice age) and interglacial cycles reached ranges of up to 120 meters in elevation 2 (indicated as relative sea level [RSL], the height of the ocean or sea relative to land at a particular location).

On a slower, broader scale, sea level across the world is not “level.” Levels can vary by location and time, and are driven by (1) changes in land ice volume and (2) Earth’s landmass and its gravity field’s response to this climate-driven ice-water mass redistribution. This process is known as glacial isostatic adjustment (GIA). The response of the earth’s surface and mantle due to fluctuations in ice-water loading, depending on how near or far from the polar ice sheets, can cause sea-level variability on the order of tens of meters at a given time (Figure 2), adding on to the previous variability of 120 meters of global water volume. 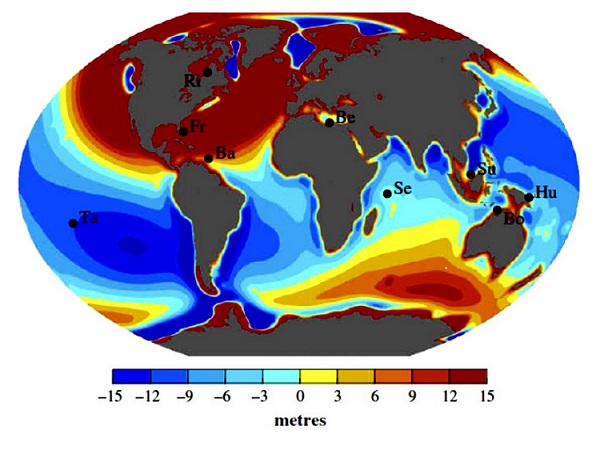 Having accounted for the volume of water required, what about the extraordinary rate of water level change needed to produce a catastrophic flood? For this, we need to look at drivers of extreme land level changes—tectonics accompanied by suitable topography, which can produce the conditions for catastrophic annihilation of life within a short period of time.

It is logical to assume that the flood should have occurred relatively near the river systems specified in Genesis 1–2. Figure 3 shows parts of Africa, the Levant (eastern Mediterranean), and the Middle East which represent a maximum range for civilization during Noah’s time. This region contains a network of major tectonic faults that can alter land heights. In the case of a fault rupture, land elevations can shift rapidly within minutes. Furthermore, subduction zones (saw-toothed lines) are prime areas for tsunami generation if these plates, when closely coupled, rupture under water. For example, the 2004 Indian Ocean Tsunami, which reached heights of up to 48 meters, was generated by a magnitude 9.3 earthquake caused by rupture along the Sunda Megathrust.3 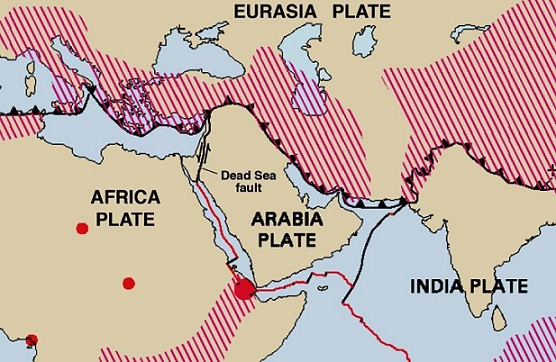 Sea level change is not the only factor affecting the elevation of flood waters. Land level change will also lead to higher relative sea level without an increase in water volume. Coincidentally (or not), the region where the African, Arabian, and Eurasian plates meet has the most significant below sea level depressions in the world, reaching lows of up to 400 meters below sea level.4 Such a low-lying plain of shallow gradient could have natural topographic barriers (called “sills” or ridges) to separate marine and fresh water, creating a viable location for early civilization to flourish. Such isolation basins and lakes created by natural barriers have been postulated to be potential locations for Noah’s flood (e.g., the Black Sea Hypothesis5). Overtopping and collapse of the sill, either through tectonic or climatic activity (e.g., a hurricane), would prove catastrophic for civilization inhabiting the low-lying basin.

Scientific Plausibility for the Flood

From a geoscience perspective this short list of the conditions required to produce Noah’s flood seems reasonable. There was clearly enough water which, when coupled with rapid land level change and suitable topography, could conceivably cause a flood of “biblical proportions.” While these mechanisms may not have been responsible for Noah’s flood, they at least demonstrate that the occurrence of this catastrophic localized flood does not require breaking the laws of science that God himself set in place (Jer. 33:25).

Human beings climb. Always have, always will. First hills, then mountains, then pinnacles so high they're called "death zones." That's as high as legs...
Evolution

The correct definition of the anthropic principle states that humanity’s existence places severe constraints on the physical constants, structure, and history of the universe,...
Geology & Earth

At this time of year, Christmas carols and songs are in full swing. One song, “Baby, It’s Cold Outside,” won an Academy Award in...
Design