Skip to content
Radiocarbon dating is one of the best-known tools used by geochemists to obtain an age of ancient materials such as wood, bones, charcoal, and coral reef limestone. The method is suitable for samples less than 50,000 years old, and can be applied to disciplines like geology, paleontology, anthropology, and archaeology. Famous artifacts and sites dated with carbon-14 include the Dead Sea Scrolls and Hezekiah’s tunnel.

The dating of all biblical artifacts and sites is valuable for improving our understanding of Scripture, and dating the Dead Sea Scrolls helps establish the credibility of the Old Testament Messianic prophecies. For example, Isaiah 53 paints a vivid picture of the pain endured by “a man of suffering.” This man is “pierced,” “crushed,” and “slaughtered” despite his innocence. Rather, declares the prophet, “the LORD has laid on him the iniquity of us all.” Christians believe that Jesus’s death fulfilled this prophecy. Indeed, it is difficult to miss the parallels between Isaiah’s man of suffering and Christ’s crucifixion. Because of this, skeptics have long argued that Isaiah 53 must have been written after the death of Christ. Radiocarbon dating of The Great Isaiah Scroll in the 1990s placed the texts between 351 and 230 BC—well before Christ’s time on Earth.

Here I will describe how three independent processes are integrated to give confidence in the reliability of the carbon-14 dating method: radioactive decay of carbon-14 (physics and chemistry), the growth of tree rings (biology), and annual layers of sedimentation (geology). It is ideal to have multiple lines of evidence!

The second process is the growth of tree rings. Each year of a tree’s life, rapid growth in the spring results in a light-colored layer in the trunk followed in autumn and winter by a darker layer. This process yields a method to count years into the past. In fact, the oldest known living tree is a bristlecone pine located in the White Mountains of California. This tree was discovered to have more than 5,000 annual rings, representing that many years. (It is in the same area as the tree nicknamed “Methuselah,” which was identified as the oldest tree for many years until recently.)

Dendrochronologists (scientists who study tree rings) can count beyond the age of individual trees by “cross-dating” the rings of multiple trees (see figure 1). Patterns in ring growth from trees in the same region can be aligned like bar codes. This overlap can provide a record extending much further into the past than the lifetime of any one tree. Using this method, scientists in Europe have produced an uninterrupted, overlapping, and cross-dated tree-ring record back to 14,000 years. (See red line in figure 3, by Davidson and Wolgemuth). 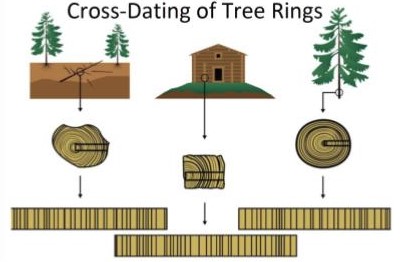 Figure 1: Cross-dating tree rings. Patterns in ring growth from trees growing in the same region are aligned like bar codes to extend the count back in time. Image credit: Gregg Davidson and Ken Wolgemuth

The third process is the sedimentation of annual layers called varves. Lake Suigetsu is part of a multi-lake system on the west coast of Japan that is dramatically unique for the study of climate history—so unique it’s nicknamed the “Miracle Lake.” Core samples from Lake Suigetsu show varves in alternating dark and light stripes (see figure 2). For long periods of time, the bottom waters of Lake Suigetsu were anoxic (no oxygen), which prevented burrowing organisms from disrupting the sediments. 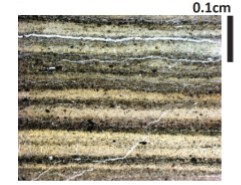 River flow into adjacent Lake Mikata serves to trap coarse-grained sediment before the fine-grained sediment passes into Lake Suigetsu. This creates the dark layers. Each spring, algal blooms grow and produce tiny shells that rain down on the lake floor. This results in the light layers.

As with tree rings, age can be determined from counting the annual varves. One interval of Suigetsu core does not have varves from a time when bottom waters were oxygenated. Fortunately, the varve record overlaps the tree-ring record, – from 10,000 to 14,000 years – allowing varves and tree rings with the same carbon-14 content to line up (see figure 3). The majority of samples measured for carbon-14 were leaves and twigs found between the varves. In figure 3, varves are identified as (tiny) green circles and data from tree rings are in red. You can see that there are about 4,000 years of overlap between the tree rings and the varves. This overlap provides a superb opportunity to verify that the sedimentary couplets in Lake Suigetsu are varves—that is, the light and dark layering is indeed annual. Together, the tree-ring and varve count traces a history of nearly 50,000 years.

Notice that the red and green line of carbon-14 data is squiggly. This result is expected because the cosmic rays bombarding the earth vary over time. Therefore, to obtain a calendar age in years, this reference line is prepared first from the carbon-14 content in the tree rings and in the leaves among the varves as shown in figure 3. Then, for a sample of unknown age, its carbon-14 content is entered on the vertical axis, and the calendar age is determined from the horizontal axis entirely from counting the tree-rings or varves. So, if you can count tree rings/varves, and a laboratory measures the carbon-14, you can determine the calendar age on the horizontal axis – no complex half-life equation required. 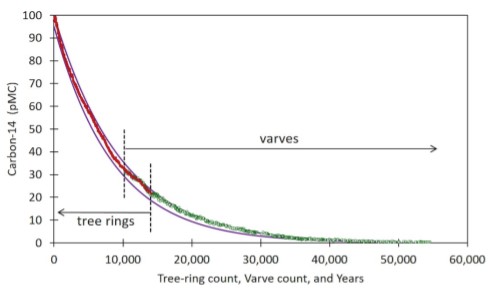 Figure 3: Tree ring and varve count vs. carbon-14 content. The solid lines represent the window for conventional expectations. Image credit: Gregg Davidson and Ken Wolgemuth. (For the full description, see figure 10 in the Davidson and Wolgemuth paper referenced in resources.)

Still another confirmation of the tree-ring count and carbon-14 age comes from a specific volcanic eruption 10,000 years ago. Argon-argon dating of an ash bed from the Lake Suigetsu core is consistent with the age determined by tree-ring counting. In other words, the ash is next to leaves in the varves that have the same amount of carbon-14 as a 10,000-year-old tree ring! (See figure 4.) 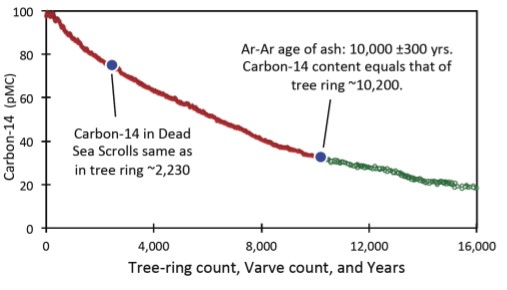 Figure 4: Carbon-14 dating of the Dead Sea Scrolls and Ar-Ar dating of an ash bed from the Lake Suigetsu core are consistent with ages determined by tree-ring counting. Image credit: Gregg Davidson and Ken Wolgemuth

Carbon-14 dating of the Dead Sea Scrolls is also consistent with the age determined by tree-ring counts that date back to 351 to 230 BC. This means we have the intersection of three completely independent methods tied together for one coherent result. Multiple lines of evidence support the conclusion that Old Testament prophecies, like Isaiah 53, predate the life of Christ. God has given us some very powerful tools to understand the past, including this history of His Scriptures.

* I want to thank Mark McEwan and Arnold Sikkema for assistance in clarifying the text. Thanks to the Canadian Scientific and Christian Affiliation, who first published this article as a pamphlet at https://www.csca.ca/pamphlets.

In October 2007, I began a TNRTB series discussing my research into how the church has understood Genesis 1 and the age of the...
Bible

Earth has experienced many tectonic plate collisions throughout its history. By far the most dramatic collision began 50 million years ago and continues to...
Design

In my last three blogs I described the inevitable climate instabilities that occur on Earth as a result of subtle variations in Earth’s rotation...
Astronomy