Astronomers have taken advantage of the hyperarid, high-elevation plateaus and mountaintops of the Atacama Desert to build some of the largest and best telescopes in the world. Figure 1 shows part of the Atacama Large Millimeter Array at 16,500 feet elevation. Figure 2 shows one of the four optical telescopes of the Paranal Observatory at 8,645 feet elevation that compose the Very Large Telescope. 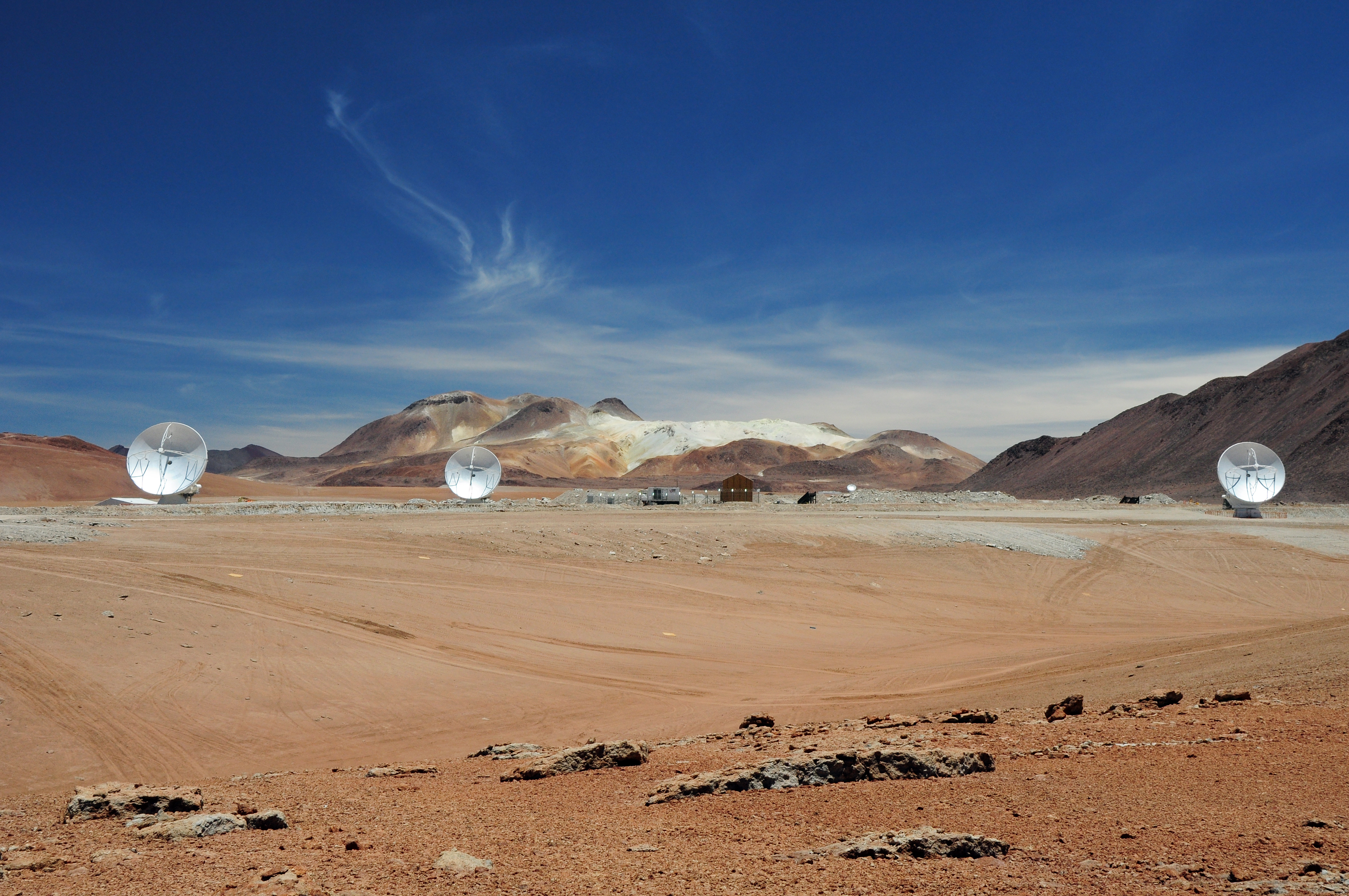 To address the first question, a team of 45 researchers from four European countries, the United States, and Chile selected four sites for biological studies that were little affected by human contamination: one coastal site in the Atacama Desert that receives occasional fog and rain, and three farther inland sites where the water content in the surface soils is below 1 percent by weight.1 The researchers looked for the following four signs of microbial activity:

At none of the four sites did the research team find evidence for permanently metabolically active microbes. However, the traces of microbial life that they found were more than what they would expect from cells and spores picked up by atmospheric winds from wetter habitats and sporadically deposited on the Atacama Desert soils.

At the three inland sites, atmospheric deposition over millions of years has resulted in the soils possessing very high salt concentrations. Thus, it came as no surprise to the researchers that the only microbes they found at the three inland sites were extremophile microbes—microbes able to survive under hyperarid, hypersaline conditions. They noted that these extremophile microbes became metabolically active following a rainfall event, became increasingly less metabolically active in the days and weeks following the rainfall event, and then entered a long period of dormancy where no metabolic activity could be measured.

Based on their findings, the research team concluded that “the range of hyperarid environments temporarily habitable for terrestrial life” is greater than what ecologists had previously thought.2 They also concluded that their findings might provide some hope that such extremophiles may be found on Mars, and perhaps even on some exoplanets.3

The research team’s conclusions need to be taken with a grain of salt (pun intended). Their first field study was conducted after a major El Niño event triggered one of the biggest rainfall events in the Atacama Desert. The coastal site received 33 millimeters (1.30 inches) of rain, while the inland sites received 8 millimeters (0.31 inches) of rain. For the two later field studies, two 7 millimeter (0.28 inch) rainfall events occurred at the coastal site. Therefore, the geographical extent of the Atacama Desert microbes and the average metabolic activity of these extremophile microbes might be a lot less than what the research team observed.

The extremophiles the researchers found in the Atacama Desert are extreme in two independent ways. They are able to live in environments that are both extremely arid and extremely salty. As such, these microbes must expend a lot of their metabolic activity, genomic resources, and cellular machinery on repairing the ongoing severe damage they experience from their arid, salty environment.

In order to survive under such inhospitable conditions, the Atacama Desert microbes are designed to operate at extremely low average metabolic rates. Therefore, they need to draw very little energy from their environments. However, the very low energy processing capability of these microbes means that their capacity for adaptation or evolution is very limited.

The need for extensive specialized repair machinery, the need to devote much of the available metabolic energy to damage repair, and the very limited capacity for adaptation and evolution led another team of researchers to conclude that extremophiles are irrelevant to the origin of life.4 Their point was that as intractable as a naturalistic explanation for mesophilic life is, naturalistic explanations of extremophilic life are orders of magnitude more intractable.

Given that the few Atacama Desert microbes that have been found in the desert’s most arid regions are living at the extreme edge of conceivable viability, why are they even there? The answer, I believe, is found in Psalm 104 and Isaiah 45:18. The relevant part of Isaiah 45:18 states:

He who fashioned and made the earth, he founded it; he did not create it to be empty, but formed it to be inhabited. . . .

Psalm 104 is a creation psalm that states that God has packed Earth with his creatures, putting diverse life in parts of the world that we humans would otherwise consider completely inhospitable. The microbes in the Atacama Desert testify to God’s almighty creative handiwork in that he has filled Earth with all manner of life.

No Joke: New Pseudogene Function Smiles on the Case for Creation

Time to confess. I now consider myself an evolutionary creationist. I have no choice. The evidence for biological evolution is so overwhelming…
Biology

On May 14, 2017, Chelsea posted a video (see below) where she asked Neil deGrasse Tyson whether he believed in God. The video takes...
Design

The replicating molecules of life (DNA and RNA) are composed of different nucleobase molecules linked together by phosphates and five-carbon sugars. Without the nucleobase...
Biochemistry