Climate change discussions can range from casual to serious, from dismissive to alarmist. But how many people talk about Earth’s current period of extreme climate stability and how we got it? Scientists have been debating the cause of our 9,500-year stable climate, and their findings stand to provide further understanding into an event that has made high-tech human civilization possible.

Characteristics of the Ice Age Cycle
For the past 2.58 million years, Earth’s ice age cycle has been characterized by long periods of 20–23% surface ice coverage (ice ages) interspersed by brief episodes (interglacials) where only about 10% of Earth’s surface is ice-covered. In the transition from an ice age to an interglacial, the global mean (average) temperature rises quickly and steadily by about 10–12°C to a maximum of 2–3°C above the current temperature. Then, almost as quickly (but not so steadily), it falls by about 10°C, dropping the world back into an ice age. Figure 1 shows this pattern for the three ice ages that preceded the most recent one. 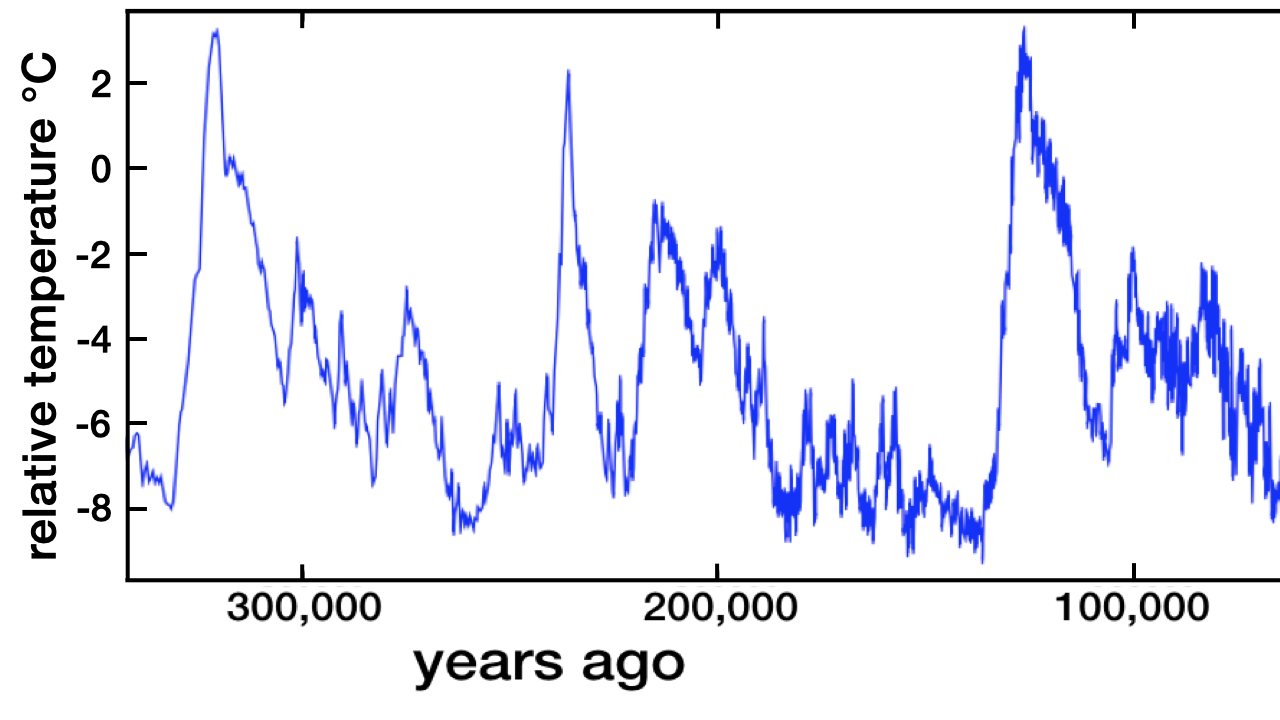 However, the circumstances were different coming out of the last ice age. Instead of the global mean temperature rising sharply and steadily toward a maximum of about 2–3°C above the present, the rise was interrupted approximately 12,900 years ago by about a 1,200-year-long major global cooling event, the Younger Dryas (YD). Figure 2 shows how the YD prevented the global mean temperature from rising to its typical interglacial maximum and made possible the past 9,500 years of extreme climate stability. 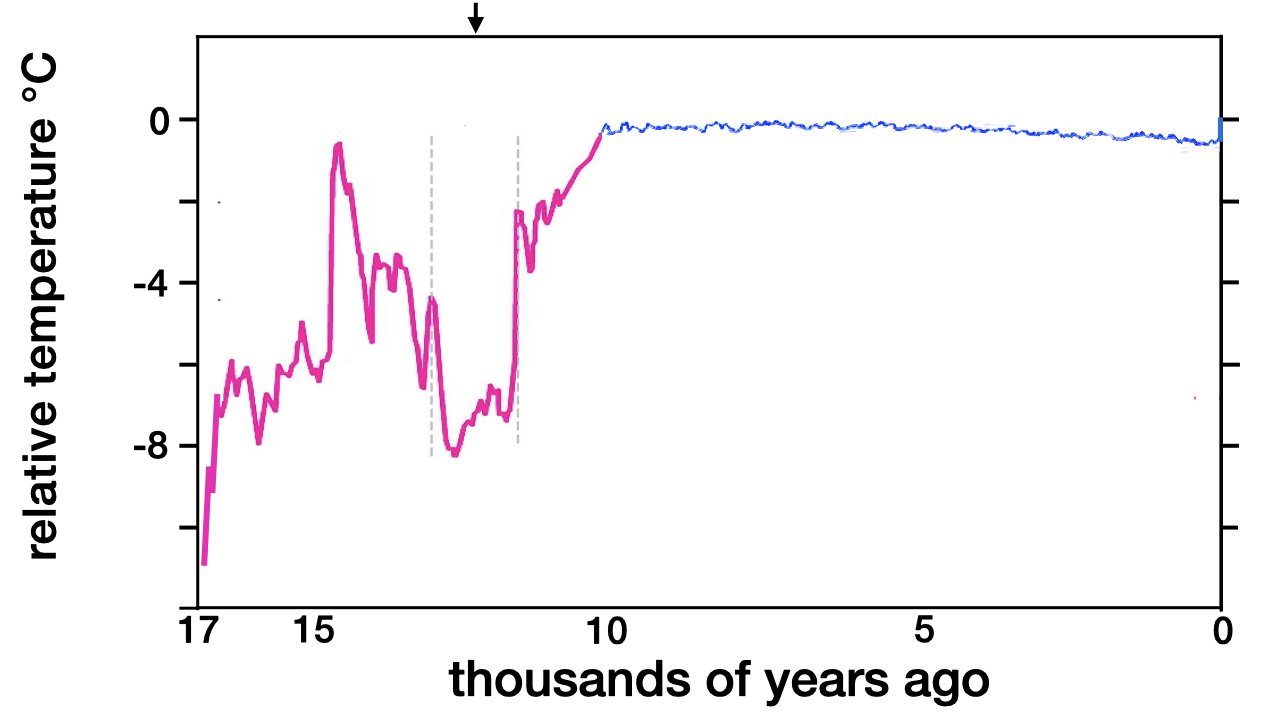 Impact Event Challenged
The cause of the YD has been a subject of scientific debate for several decades. In my latest book, Weathering Climate Change, I presented the evidence for the recently discovered Hiawatha impactor as the causal agent for the YD.1 This evidence refers to a large crater depression (about 19 miles wide) beneath Greenland’s ice sheet in the Hiawatha Glacier region. The crater is thought to have been caused by an asteroid striking around 12,800 years ago that triggered Earth’s current period of climate stability.

Now, a team of 23 scientists from China, Spain, Austria, and the USA has published dating measurements that they claim rule out the northwest Greenland Hiawatha impactor as the cause of the YD.2 Instead, they suggest a worldwide oceanic reorganization occurred in response to an “abrupt North Atlantic climate change.”3

The team used the uranium-thorium dating technique to improve an analysis of speleothem oxygen-isotope data in order to produce the most accurate date for the onset of the YD. Their date for the onset of the YD in the North Atlantic is 12,870±30 years ago. They cite two independent carbon-14 dating determinations for the Hiawatha impact event: one yielding a date of 12,835–12,735 years ago, the other a date of 12,875–12,775 years ago. While the latter date overlaps their measurement for the YD onset, they argue that there would be about a 50-year lag between the impact event and the cooling of the North Atlantic Ocean. Hence, they conclude that the Hiawatha impactor could not be the cause of the YD. They support their conclusion by pointing out that it would be inconceivable for the Hiawatha impactor to trigger the YD and not leave an unmistakable imprint in the Greenland ice core records.4

Analyzing the Challenge
In reading through the team’s paper I was not persuaded that they had successfully eliminated the Hiawatha impactor as the cause of the YD. Here are five reasons why.

Better Understanding of an Extraordinary Event
By these critiques I do not intend to imply that the 23 scientists failed to make important scientific advances. They propelled the way forward to coming up with more accurate and reliable dates for both the YD and the Hiawatha impactor. Their most important contribution was showing that the YD cooling event began in the North Atlantic Ocean and spread along a north to south route all the way to Antarctica. They showed that the cooling in Antarctica lagged the cooling in the North Atlantic by 200±100 years. They also demonstrated that the termination of the YD began in the Southern Ocean region around Antarctica about 11,900 years ago and concluded in the North Atlantic 11,700–11,610 years ago.

The team provided additional evidence that the YD played a crucial role in preventing a global mean temperature rise to 2–3°C above the present and making possible the past 9,500 years of extreme climate stability. Without this unprecedented period of stability in the midst of an ice cycle, it would not be possible for the rise of a human population in the billions or for humanity to enjoy global high-technology civilization. Given how extremely extraordinary the past 9,500 years have been, every human is compelled to ask why we’ve been so fortunate. An additional question to ponder is, What is the purpose of it all?

A demolition expert surveys the building designated for destruction. With one swing of the wrecking ball, he must bring down the building without scattering...
Geology & Earth

Scientists in Germany have uncovered more evidence that supports the supernatural design of Earth for maximizing the biomass and biodiversity of the planet. They...
Geology & Earth

Q&A: Is the Moon’s Recession Evidence for a Young Earth?