A being so powerful and so full of knowledge as a God who could create the universe, is to our finite minds omnipotent and omniscient, and it revolts our understanding to suppose that his benevolence is not unbounded, for what advantage can there be in the sufferings of millions of lower animals throughout almost endless time? This very old argument from the existence of suffering against the existence of an intelligent first cause seems to me a strong one; whereas, as just remarked, the presence of much suffering agrees well with the view that all organic beings have been developed through variation and natural selection.1

If God exists and if he is all-powerful, all-knowing, and all-good, why is there so much pain and suffering in the world? This conundrum keeps many skeptics and seekers from the Christian faith and even troubles some Christians.

Perhaps nothing epitomizes the problem of pain and suffering more than the cruelty observed in nature. Indeed, what advantage can there be in the suffering of millions of animals?

Often, the pain and suffering animals experience is accompanied by unimaginable and seemingly unnecessary cruelty.

Take nematodes (roundworms) as an example. There are over 10,000 species of nematodes. Some are free-living. Others are parasitic. Nematode parasites infect humans, animals, plants, and insects, causing untold pain and suffering. But their typical life cycle in insects seems especially cruel.

Nematodes that parasitize insects usually are free-living in their adult form but infest their host in the juvenile stage. The infection begins when the juvenile form of the parasite enters into the insect host, usually through a body opening, such as the mouth or anus. Sometimes the juveniles drill through the insect’s cuticle.

Once inside the host, the juveniles release bacteria that infect and kill the host, liquefying its internal tissues. As long as the supply of host tissue holds out, the juveniles will live within the insect’s body, even reproducing. When the food supply runs out, the nematodes exit the insect and seek out another host. 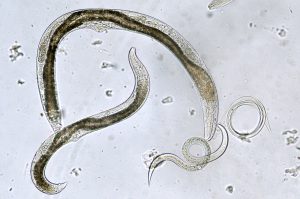 Why would God create a world with parasitism? Could God really be responsible for a world like the one we inhabit? Many skeptics would answer “no” and conclude that God must not exist.

A Christian Response to the Problem of Evil

One way to defend God’s existence and goodness in the face of animal pain and suffering is to posit that there just might be good reasons for God to create the world the way it is. Perhaps what we are quick to label as evil may actually serve a necessary function.

This perspective gains support based on some recent insights into the benefits that insect parasites impart to ecosystems. A research team from the University of Georgia (UGA) recently unearthed one example of the important role played by these parasites.2 These researchers demonstrated that nematode-infected horned passalus beetles (bess beetles) are more effective at breaking down dead logs in the forest than their parasite-free counterparts—and this difference benefits the ecosystem. Here’s how.

The Benefit Parasites Provide to the Ecosystem

The horned passalus lives in decaying logs. The beetles consume wood through a multistep process. After ingesting the wood, these insects excrete it in a partially digested form. The wood excrement becomes colonized by bacteria and fungi and then is later re-consumed by the beetle.

These insects can become infected by a nematode parasite (Chondronema passali). The parasite inhabits the abdominal cavity of the beetle (though not its gastrointestinal tract). When infected, the horned passalus can harbor thousands of individual nematodes.

To study the effect of this parasite on the horned passalus and the forest ecosystem inhabited by the insect, researchers collected 113 individuals from the woods near the UGA campus. They also collected pieces of wood from the logs bearing the beetles.

In the laboratory, they placed each of the beetles in separate containers that also contained pieces of wood. After three months, they discovered that the beetles infected with the nematode parasite processed 15 percent more wood than beetles that were parasite-free. Apparently, the beetles compensate for the nematode infection by consuming more food. One possible reason for the increased wood consumption may be due to the fact that the parasites draw away essential nutrients from the beetle host, requiring the insect to consume more food.

While it isn’t clear if the parasite infestation harms the beetle (infected beetles have reduced mobility and loss of motor function), it is clear that the infestation benefits the ecosystem. These beetles play a key role in breaking down dead logs and returning nutrients to the forest soil. By increasing the beetles’ wood consumption, the nematodes accelerate this process, benefiting the ecosystem’s overall health.

Cody Prouty, one of the project’s researchers, points out “that although the beetle and the nematode have a parasitic relationship, the ecosystem benefits from not only the beetle performing its function, but the parasite increasing the efficiency of the beetle. Over the course of a few years, the parasitized beetles could process many more logs than unparasitized beetles, and lead to an increase of organic matter in soils.”3

This study is not the first to discover benefits parasites impart to ecosystems. Parasites play a role in shaping ecosystem biodiversity and they intertwine with the food web. The researchers close their article this way: “Countering long-standing unpopular views of parasites is certainly challenging, but perhaps evidence like that presented here will be of use in this effort.”4

Such evidence does not “revolt our understanding,” as Darwin might suggest, but instead enhances our insights into the creation and helps counter the challenge of the problem of evil. Even creatures as gruesome as parasites can serve a beneficial purpose in creation and maybe could rightfully be understood as good.

It Takes a Dull Star to Have a Great Party

Some people, no matter what the occasion, are always the life of the party. They not only occupy the center of the action, but...
Design

Sand plays a crucial role in sustaining human civilization and Earth’s life. The ongoing production of sand is critically important for compensating for the...
Design