What a book a Devil’s chaplain might write on the clumsy, wasteful, blundering, low and horridly cruel works of nature!

You may not have ever heard of him, but he played an important role in ushering in the Darwinian revolution in biology. His name was Asa Gray.

Gray (1810–1888) was a botanist at Harvard University. He was among the first scientists in the US to adopt Darwin’s theory of evolution. Asa Gray was also a devout Christian. 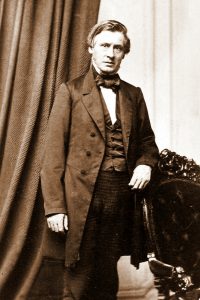 Gray was convinced that Darwin’s theory of evolution was sound. He was also convinced that nature displayed unmistakable evidence for design. For this reason, he reasoned that God must have used evolution as the means to create and, in doing so, Gray may have been the first person to espouse theistic evolution.

In his book Darwinia, Asa Gray presents a number of essays defending Darwin’s theory. Yet, he also expresses his deepest convictions that nature is filled with indicators of design. He attributed that design to a type of God-ordained, God-guided process. Gray argued that God is the source of all evolutionary change. 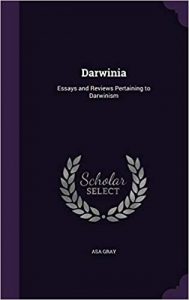 Gray and Darwin struck up a friendship and exchanged around 300 letters. In the midst of their correspondence, Gray asked Darwin if he thought it possible that God used evolution as the means to create. Darwin’s reply revealed that he wasn’t very impressed with this idea.

I cannot persuade myself that a beneficent & omnipotent God would have designedly created the Ichneumonidæ with the express intention of their feeding within the living bodies of caterpillars, or that a cat should play with mice. Not believing this, I see no necessity in the belief that the eye was expressly designed. On the other hand I cannot anyhow be contented to view this wonderful universe & especially the nature of man, & to conclude that everything is the result of brute force. I am inclined to look at everything as resulting from designed laws, with the details, whether good or bad, left to the working out of what we may call chance. Not that this notion at all satisfies me. I feel most deeply that the whole subject is too profound for the human intellect. A dog might as well speculate on the mind of Newton. Let each man hope & believe what he can.1

Darwin could not embrace Gray’s theistic evolution because of the cruelty he saw in nature that seemingly causes untold pain and suffering in animals. Darwin—along with many skeptics today—couldn’t square a world characterized by that much suffering with the existence of a God who is all-powerful, all-knowing, and all-good.

The widespread occurrence of filial cannibalism (when animals eat their young or consume their eggs after laying them) and abandonment (leading to death) exemplify such cruelty in animals. It seems such a low and brutal feature of nature.

Why would God create animals that eat their offspring and abandon their young?

Is Cruelty in Nature Really Evil?

But what if there are good reasons for God to allow pain and suffering in the animal kingdom? I have written about good scientific reasons to think that a purpose exists for animal pain and suffering (see “Scientists Uncover a Good Purpose for Long-Lasting Pain in Animals” by Fazale Rana).

And, what if animal death is a necessary feature of nature? Other studies indicate that animal death promotes biodiversity and ecosystem stability (see “Of Weevils and Wasps: God’s Good Purpose in Animal Death” by Maureen Moser, and “Animal Death Prevents Ecological Meltdown” by Fazale Rana).

What? How is that conclusion possible?

These behaviors become important when animals lay too many eggs. In order to properly care for their eggs (protect, incubate, feed, and clean), animals confine egg-laying to a relatively small space. This practice leads to a high density of eggs. But this high density can have drawbacks, making the offspring more vulnerable to diseases and lack of sufficient food and oxygen. Filial cannibalism reduces the density, ensuring a greater chance of survival for those eggs that are left behind. So, ironically, when egg density is too high for the environmental conditions, more offspring survive when the parents consume some, rather than none, of the eggs.

So, why lay so many eggs in the first place?

In general, the more eggs that are laid, the greater the number of surviving offspring—assuming there are unlimited resources and no threats of disease. But it is difficult for animals to know how many eggs to lay because the environment is unpredictable and constantly changing. A better way to ensure reproductive fitness is to lay more eggs and remove some of them if the environment can’t sustain the egg density.

So, it appears as if there is a good reason for God to create animals that eat their young. In fact, you might even argue that filial cannibalism leads to a world with less cruelty and suffering than a world where filial cannibalism doesn’t exist at all. This feature of nature is consistent with the idea of an all-powerful, all-knowing, and all-good God who has designed the creation for his good purposes.

Efficient plumbing is easy to take for granted until it suddenly ceases to be efficient. This point came home to me rather dramatically a...
Evolution

Why Water Worlds Are Inhospitable to Life

In the classic poem The Rime of the Ancient Mariner, the thirsty mariner looks out at the ocean surrounding him and declares, “Water, water,...
Design

Uranium and thorium play a vital role in the plate tectonics and volcanism of planets. Consequently, the amount of these two metallic elements influences...
Design