For you created my inmost being; you knit me together in my mother’s womb. I praise you because I am fearfully and wonderfully made; your works are wonderful, I know that full well.

Psalm 139 has been on my mind quite a bit lately. Maybe it’s because I have recently written a couple of articles about the incredible design of human pregnancy—design that highlights just how fearfully and wonderfully human beings are made.

Posting these articles to my Facebook page prompted one of my Facebook friends, Eric, to ask a thought-provoking question:

“Psalm 139:13 says God ‘knit’ us in our mother’s womb. This sounds a lot to me like DNA replication. Is this reading science into the text?”

Given the importance of DNA replication to embryological development and the specific features of the replication process, I understand why Eric would want to make that comparison. While I think that there are passages in Scripture that anticipate (even predict) scientific discoveries, I don’t see Psalm 139 referring to DNA replication. (By the way, I appreciate Eric’s caution about reading science into the text.)

Having said that, I do think that the description of God knitting each one of us together in our mother’s womb is an apt analogy for the process of embryological development at the cellular level, because both knitting and development are predicated on forethought and rely on a special type of information—qualities that reflect the activity of an Intelligent Agent.

An Overview of Embryo Growth and Development

Embryological development begins the moment the egg cell (oocyte) becomes fertilized by a sperm cell, yielding a zygote. In turn, the zygote undergoes several rounds of cell division (referred to as cleavage) to produce a berry-like structure, called a morula. All of this happens by the third or fourth day of pregnancy.

Over the next couple of days, the morula undergoes changes that characterize the process of embryogenesis. In addition to undergoing growth and division, cells in the morula begin to migrate relative to one another to form a structure with a hollow sphere called a blastula. Within the sphere is a clump of cells called the inner cell mass. 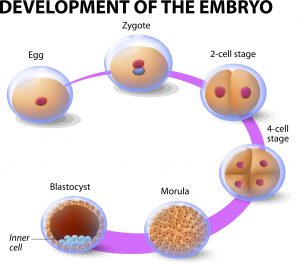 The next stage in embryogenesis sees the inner cell mass transform into a stack of three cellular layers (called germ layers) through cell growth, division, and migration. At this stage, the embryo is referred to as the gastrula.

The specific cell layers of the gastrula are labeled: (1) the ectoderm, (2) the mesoderm, and (3) the endoderm. Each of these cell layers is fated to develop into different organ systems in the body. The ectoderm forms the nervous system and the epidermis of the skin. The mesoderm forms muscles, the skeletal system, blood and blood vessels, and the dermis of the skin. The endoderm forms the linings of the digestive and respiratory systems, and organs that comprise the digestive system, such as the liver and pancreas.

After gastrulation, the next stage involves organ formation. Organogenesis begins in each of the individual cell layers and involves the careful orchestration of several processes, including cell growth, cell division, cell-to-cell communication, cell migration, differentiation of cells into specialized types, secretion of extracellular materials, and even cell death (which is necessary to sculpt the tissues and organs).

Perhaps the problem has to do with the fact that the scientific community views embryogenesis from a strictly materialistic/naturalistic framework. But what if embryo development were to be examined from a creation model vantage point?

Embryological Development and the Case for Intelligent Design

Remarkably, the instructions for embryogenesis appear to be instantiated in the cells that make up the developing embryo. From a creation model perspective, these instructions must come from a Mind, because instructions are a form of information (specifically, algorithmic information) and common experience teaches that algorithms emanate from a Mind. Toward that end, origin-of-life researchers Paul Davies and Sara Walker recently acknowledged that currently there is no evolutionary explanation for algorithmic information instantiated in living matter.2

Another reason to think that embryological development stems from a Creator’s involvement relates to the foresight required to formulate the instructions so that they lead to the desired outcome for embryogenesis. Evolutionary processes do not have foresight. Foresight also reflects the work of a Mind. If these instructions are flawed for even a single cell during the early stages of development, the consequences would be disastrous, with the offspring turning into a “developmental monster,” compromised in its capacity to survive and reproduce. To put it differently, it is hard to envision how evolutionary processes could generate the algorithmic information needed for embryogenesis through trial and error, without the benefit of foresight.

To help make this point clear, consider the analogy between embryogenesis and the routine performed by cheerleaders during a competition.3 Throughout the performance, each cheerleader has a specific set of movements and actions she will perform. Before the performance, her coach instructs her in exactly what to do, when to do it, and where to do it on the mat. Her individual movements and actions are different from every other team member, but when performed in conjunction with her teammates (who have their own set of instructions), the outcome can be dazzling. All this is possible, because the coach choreographed the routine ahead of the performance, with an eye toward how the routine would unfold at different stages of the performance. That is, the routine was intelligently designed with the benefit of the coach’s foresight and that design was implemented through the instructions given to each girl. If not for the coach’s foresight and instructions, chaos would ensue during the performance as each girl did whatever seemed right to her at the time.

In like manner, during embryogenesis, each cell harbors a set of instructions that tell it: (1) what chemicals and how much of these materials to secrete to establish the gradients needed to guide development, (2) when to reproduce, (3) when and where to migrate, (4) when to differentiate, (5) when and what materials to secrete to form the extracellular matrix, and (6) when to die. In a sense, the cells are like cheerleaders. And the process of embryological development is akin to the choreography of a cheer routine. The only difference: the choreography of embryological development is much more complex, elaborate, and sophisticated.

As with cheerleading, someone must give the cells instructions ahead of time with the end goal of embryological development in view. And I see that “someone” as the Creator.

Knit Together in the Womb

I also find “knitting” an apt metaphor for embryological development. My mother is an avid knitter. And whenever I watch her knit, I can’t help but recognize the similarities to a cheer routine. Knitting consists of a choreography, of sorts. Someone who knits a sweater has a final product in mind before she even picks up needles and chooses the yarn. Making use of a set of instructions—algorithmic information—that tells her which yarn to use and which knitting strokes to employ, she performs a series of actions that will eventually lead to the final product, though what that product is may not be evident at the instant those actions are performed, at least to the uninitiated.

In this context, it is intriguing that David, the author of Psalm 139, would describe embryological development as a knitting process. David writes,

“Your eyes saw my unformed body; all the days ordained for me were written in your book before one of them came to be.”

In light of what we have learned about embryological development, I find the scientific prescience of Psalm 139 remarkable.

Weird Life: Could Life Be Based on Another Liquid?

The science-fiction television show Babylon 5 featured a giant space station where humans and aliens could meet in peace. The eponymous station’s design had...
Biochemistry

Mutations, Cancer, and the Case for a Creator

Cancer. Perhaps no other word evokes more fear, anger, and hopelessness. It goes without saying that cancer is an insidious disease. People who get...
Biochemistry