Morales accidentally becomes transported from his universe to ours, where Peter Parker is Spider-Man. Parker meets Morales and teaches him how to be Spider-Man. Along the way, they encounter different versions of Spider-Man from alternate dimensions. All of them team up to save the multiverse and to find a way to return back to their own versions of reality.

What could be better than that?

In 1962, Spider-Man’s creators, Stan Lee and Steve Ditko, drew inspiration for their superhero in the amazing abilities of spiders. And today, engineers find similar inspiration, particularly, when it comes to spider silk. The remarkable properties of spider’s silk is leading to the creation of new technologies.

Engineers are fascinated by spider silk because this material displays astonishingly high tensile strength and ductility (pliability), properties that allow it to absorb huge amounts of energy before breaking. Only one-sixth the density of steel, spider silk can be up to four times stronger, on a per weight basis.

By studying this remarkable substance, engineers hope that they can gain insight and inspiration to engineer next-generation materials. According to Northwestern University researcher Nathan C. Gianneschi, who is attempting to produce synthetic versions of spider silk, “One cannot overstate the potential impact on materials and engineering if we can synthetically replicate the natural process to produce artificial fibers at scale. Simply put, it would be transformative.”1

Gregory P. Holland of San Diego State University, one of Gianneschi’s collaborators, states, “The practical applications for materials like this are essentially limitless.”2 As a case in point, synthetic versions of spider silk could be used to make textiles for military personnel and first responders and to make construction materials such as cables. They would also have biomedical utility and could be used to produce environmentally friendly plastics.

But things aren’t that simple. Even though life scientists and engineers understand the chemical structure of spider’s silk and how its structural features influence its mechanical properties, they have not been able to create synthetic versions of it with the same set of desired properties. 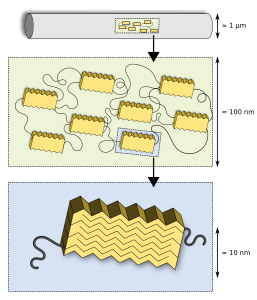 Figure 1: The Molecular Architecture of Spider Silk. Fibers of spider silk consist of proteins that contain crystalline regions separated by amorphous regions. The crystals form from regions of the protein chain that fold into structures called beta-sheets. These beta-sheets stack together to give the spider silk its tensile strength. The amorphous regions give the silk fibers ductility. Image credit: Chen-Pan Liao.

Researchers working to create synthetic spider silk speculate that the process by which the spider spins the silk may play a critical role in establishing the biomaterial’s tensile strength and ductility. Before it is extruded, silk exists in a precursor form in the silk gland. Researchers think that the key to generating synthetic spider silk with the same properties as naturally formed spider silk may be found by mimicking the structure of the silk proteins in precursor form.

Previous work suggests that the proteins that make up spider silk exist as simple micelles in the silk gland and that when spun from this form, fibers with greater-than-steel strength are formed. But researchers’ attempts to apply this insight in a laboratory setting failed to yield synthetic silk with the desired properties.

The Structure of Spider Silk Precursors

Hoping to help unravel this problem, a team of American collaborators led by Gianneschi and Holland recently provided a detailed characterization of the structure of the silk protein precursors in spider glands.3 They discovered that the silk proteins form micelles, but the micelles aren’t simple. Instead, they assemble into a complex structure comprised of a hierarchy of subdomains. Researchers also learned that when they sheared these nanoassemblies of precursor proteins, fibers formed. If they can replicate these hierarchical nanostructures in the lab, researchers believe they may be able to construct synthetic spider silk with the long-sought-after tensile strength and ductility.

Attempts to find inspiration for new technology is n0t limited to spider silk. It has become rather commonplace for engineers to employ insights from arthropod biology (which includes spiders and insects) to solve engineering problems and to inspire the invention of new technologies—even technologies unlike anything found in nature. In fact, I discuss this practice in an essay I contributed for the book God and the World of Insects.

The idea that biological designs can inspire engineering and technology advances is highly provocative. It highlights the elegant designs found throughout the living realm. In the case of spider silk, design elegance is not limited to the structure of spider silk but extends to its manufacturing process as well—one that still can’t be duplicated by engineers.

The elegance of these designs makes possible a new argument for God’s existence—one I have named the converse Watchmaker argument. (For a detailed discussion see the essay I contributed to the book Building Bridges, entitled, “The Inspirational Design of DNA.”)

Biomimetics and the Challenge to the Evolutionary Paradigm

From my perspective, the use of biological designs to guide engineering efforts seems fundamentally at odds with evolutionary theory. Generally speaking, evolutionary biologists view biological systems as the products of an unguided, historically contingent process that co-opts preexisting systems to cobble together new ones. Evolutionary mechanisms can optimize these systems, but even then they are, in essence, still kludges.

On the other hand, biomimetics and bioinspiration naturally flow out of a creation model approach to biology. Using designs in nature to inspire engineering only makes sense if these designs arose from an intelligent Mind, whether in this universe or in any of the dimensions of the Spider-Verse.

Exploring the Human Genome: Can We Make Predictions from Infancy?

Have you ever thought about which characteristics are critical for an infant’s development? By observing whether an infant is breathing, cooing, eating, sleeping, crying,...
Biology

One “good” thing about the sluggish economy is all the discounts restaurants are offering. My favorite: two meals for the price of one!
Biology