As I interact with people on social media and travel around the country to speak on the biochemical evidence for a Creator, I am frequently asked to comment on laminin.1 The people who mention this protein are usually quite excited, convinced that its structure provides powerful scientific evidence for the Christian faith. Unfortunately, I don’t agree.

Motivating this unusual question is the popularized claim of a well-known Christian pastor that laminin’s structure provides physical evidence that the God of the Bible created human beings and also sustains our lives. While I wholeheartedly believe God did create and does sustain human life, laminin’s apparent cross-shape does not make the case.

Laminin is one of the key components of the basal lamina, a thin sheet-like structure that surrounds cells in animal tissue. The basal lamina is part of the extracellular matrix (ECM). This structure consists of a meshwork of fibrous proteins and polysaccharides secreted by the cells. It forms the space between cells in animal tissue. The ECM carries out a wide range of functions that include providing anchor points and support for cells.

Laminin is a relatively large protein made of three different protein subunits that combine to form a t-shaped structure when the flexible rod-like regions of laminin are fully extended. Each of the four “arms” of laminin contains sites that allow this biomolecule to bind to other laminin molecules, other proteins (like collagen), and large polysaccharides. Laminin also provides a binding site for proteins called integrins, which are located in the cell membrane. 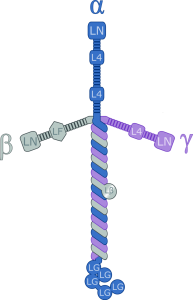 Laminin’s architecture and binding sites make this protein ideally suited to interact with other proteins and polysaccharides to form a network called the basal reticulum and to anchor cells to its biochemical scaffolding. The basal reticulum helps hold cells together to form tissues and, in turn, helps cement that tissue to connective tissues.

The cross-like shape of laminin and the role it plays in holding tissues together has prompted the claim that this biomolecule provides scientific support for passages such as Colossians 1:15–17 and shows how the God of the Bible must have made humans and continues to sustain them.

I would caution Christians against using this “argument.” I see a number of problems with it. (And so do many skeptics.)

First, the cross shape is a simple structure found throughout nature. So, it’s probably not a good idea to attach too much significance to laminin’s shape. The t configuration makes laminin ideally suited to connect proteins to each other and cells to the basal reticulum. This is undoubtedly the reason for its structure.

Secondly, the cross shape of laminin is an idealized illustration of the molecule. Portraying complex biomolecules in simplified ways is a common practice among biochemists. Depicting laminin in this extended form helps scientists visualize and catalog the binding sites along its four arms. This configuration should not be interpreted to represent its actual shape in biological systems. In the basal reticulum, laminin adopts all sorts of shapes that bear no resemblance to a cross. In fact, it’s much more common to observe laminin in a swastika configuration than in a cross-like one. Even electron micrographs of isolated laminin molecules that appear cross-shaped may be misleading. Their shape is likely an artifact of sample preparation. I have seen other electron micrographs that show laminin adopting a variety of twisted shapes that, again, bear no resemblance to a cross.

Finally, laminin is not the only molecule “holding things together.” A number of other proteins and polysaccharides are also indispensable components of the basal reticulum. None of these molecules is cross-shaped.

As I argue in my book, The Cell’s Design, the structure and operation of biochemical systems provide some of the most potent support for a Creator’s role in fabricating living systems. Instead of pointing to superficial features of biomolecules such as the “cross-shaped” architecture of laminin, there are many more substantive ways to use biochemistry to argue for the necessity of a Creator and for the value he places on human life. As a case in point, the salient characteristics of biochemical systems identically match those features we would recognize immediately as evidence for the work of a human design engineer. The close similarity between biochemical systems and the devices produced by human designers logically compels this conclusion: life’s most fundamental processes and structures stem from the work of an intelligent, intentional Agent.

When Christians invest the effort to construct a careful case for the Creator, skeptics and seekers find it difficult to deny the powerful evidence from biochemistry and other areas of science for God’s existence.

A few days ago, I described new work that demonstrates the optimal design of the cell’s metabolism. Many other features of the cell’s chemistry...
Biochemistry

When I was a little kid, my dad used to insist I help him work on our family car. I'm sure he saw it...
Biochemistry

Three examples of biological mimicry I enjoy watching The New Yankee Workshop and Ask This Old House. Both of these programs showcase the skills of...
Biochemistry