I have lived in the Los Angeles area for over two decades, but I am still a small-town boy at heart. Growing up in West Virginia, I lived in communities with population sizes well under 30,000. Even during my years in college, graduate school and as a post doctoral fellow, I lived in small towns. It was quite a culture shock for me when I moved my family to Cincinnati, Ohio, to take a position in R&D at a Fortune 500 company. It was by far the largest place I had ever lived.

The culture shock was even greater when we moved to the Los Angeles area in 1999. Nothing had prepared me for the immensity of Southern California and the intensity of the traffic. After I got over my initial reaction, I discovered that it was easier to get around Southern California than many of the other communities in which I had lived. In part, my ease was made possible because most of the suburban towns surrounding Los Angeles are laid out in a grid, with major streets oriented north and south and east and west. Moreover, these communities were specifically designed with the idea that automobiles would serve as their primary mode of transportation.

Many of the cities in the East and Midwest are much older than LA and weren’t designed with automobiles in mind. In fact, some of these older cities weren’t really planned at all. In their earlier days, these cities grew and developed organically in an unplanned manner. It was only later that city leaders began planning the expansion of their communities and attempted to retrofit them for automobiles. The complex history of these cities can make them a challenge to navigate by car.

Intermediary Metabolism
Interconnected city streets share a lot in common with metabolic pathways located inside cells. The chemical reactions that comprise intermediary metabolism are organized like city streets into routes or pathways comprised of a series of chemical reactions. These reactions transform starting compounds into final products via a sequence of small, stepwise chemical changes. Each step in a metabolic route is mediated by a protein (called an enzyme). The pathways can be linear, branched, or circular.

The chemical components that form part of one metabolic sequence sometimes take part in other pathways. These shared compounds cause metabolic pathways to be interconnected and networked together in the same way that streets form intersections when they come together. The collection of metabolic processes represents a complex, reticulated web of chemical reactions, each one catalyzed by an enzyme. 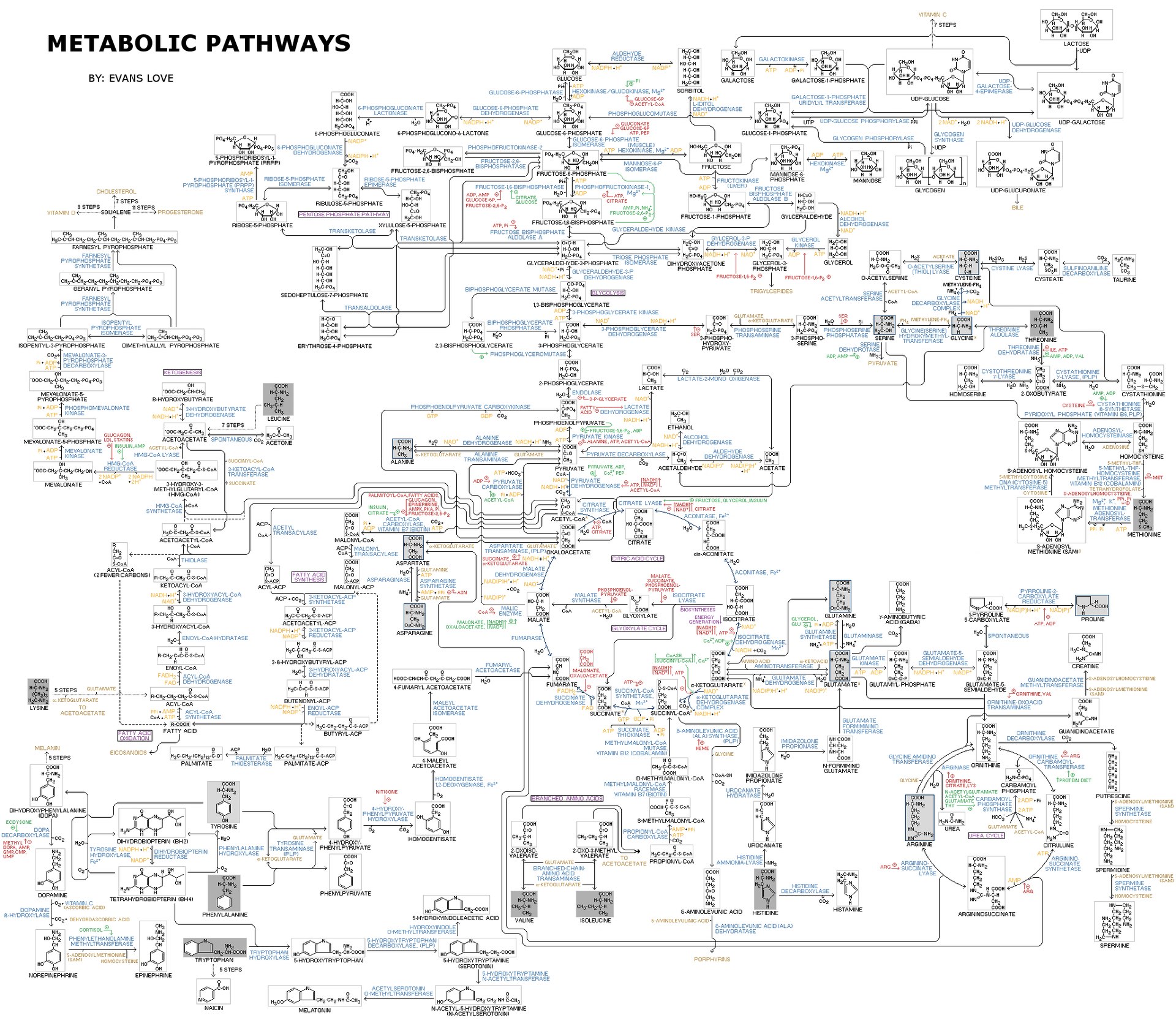 The Origin of Intermediary Metabolism
One of the questions confronting origin-of-life researchers is, Are these metabolic routes in the cell planned or unplanned?

At first glance, it would be easy to conclude that there isn’t necessarily any rhyme or reason for the design of intermediary metabolism. In fact, given the vast complexity of the cell’s metabolism, it’s not unreasonable to think that evolutionary processes simply cobbled together these pathways, bit by bit, over vast time periods through a historically contingent process—just like the unplanned layout of some of the cities located in the East and the Midwest.

Yet, a recent study by researchers from Heinrich Heine University (HHU) in Düsseldorf, Germany has uncovered a special property for 402 core metabolic reactions that are found in every organism on the planet.1 This special property reveals that a rationale undergirds metabolic pathways, indicating that they are unlikely the outworking of a historically contingent evolutionary history. Instead, their design seems to be just-right, and predetermined and prescribed by the laws of nature in the same way the streets and highways of Southern California have been carefully planned. If so, this revelation points to a teleological undergirding to life’s most basic and fundamental systems.

What Was the Original Energy Source for Intermediary Metabolism?

To address these questions, the investigators studied the thermodynamic properties of the metabolic reactions that most reasonably would have existed in the putative last universal common ancestor (LUCA). LUCA is the organism (or community of organisms) that many life scientists believe arose out of chemical evolution and roots the evolutionary tree of life.

The research team identified 402 universal metabolic reactions. These reactions play a role in the synthesis of amino acids, nucleotides, and enzyme cofactors—life’s building block materials. Because of the universal distribution of these metabolic processes, origin-of-life researchers argue that they would have been present in LUCA and have been conserved for nearly 4 billion years of evolutionary history.

In some of the simplest cells on Earth, the universal set of core metabolic reactions can be kick-started from hydrogen (H2), carbon dioxide (CO2), ammonia (NH3), hydrogen sulfide (H2S), and inorganic phosphate (PO4 3-) taken from the environment. These compounds are also found at hydrothermal vents in Earth’s oceans, a location that many origin-of-life investigators think may have been the setting for life’s genesis.

The research team discovered that nearly all the reactions (over 95%) are exergonic when the pH is between 7 to 10 and the temperature is between 80°C to 100°C. The optimal set of thermodynamic conditions for these reactions appears to be pH 9 and 80°C. In other words, under hydrothermal vent conditions, the vital 402 core metabolic reactions proceed spontaneously. They don’t require an external energy source to drive them; rather the necessary energy is released during the chemical transformations themselves.

William Martin, who headed the research team, marvels about the fact that “the 402 interconnected reactions of central metabolism, which seem so hopelessly complex upon first encounter, suddenly reveal a natural tendency to unfold all by themselves under the right conditions.”2 Martin and his team argue that their insight adds support to the idea that life arose at hydrothermal vent environments and that LUCA’s metabolic reactions would have proceeded spontaneously, setting the stage for future evolutionary development.

Is Metabolism Planned?
In reaching their conclusion, the HHU research team failed to consider previous studies that have identified significant—if not intractable—problems with a hydrothermal vent origin of life scenario and metabolism-first models. (See Resources for Further Exploration)

The origin-of-life question notwithstanding, the team did discover that the core metabolic reactions—universal to all life are a special subset of chemical processes. These reactions have the just-right thermodynamic characteristics that make them ideally suited to form the core of the cell’s metabolic operations. Because the energy for these reactions comes from the reactions themselves, once these reactions get started, they will tend to proceed on their own.

This discovery makes it unlikely that the metabolic pathways resulted from the happenstance outworking of a historically contingent evolutionary process. Instead, there appears to be a rationale that undergirds the design of the pathways that make up the core of intermediary metabolism. Part of that rationale includes the thermodynamic properties of these chemical transformations.

Collectively, these insights can be marshaled to make a case that the highly optimized and just-right metabolic operations of the cell have been designed, reflecting the outworking of a Mind.

Prebiotic Chemistry and Anthropic Coincidences
Even if the origin of life is viewed in evolutionary terms, discoveries like this one make it increasingly difficult to avoid the appearance of a teleological (design and purpose) undergirding to chemical evolution.

Let’s assume that life did evolve at hydrothermal vents. It is remarkably fortuitous that the conditions at these locations are precisely those needed to ensure that all the core metabolic reactions needed to make amino acids, nucleotides, and enzyme cofactors. That is, the just-right reactions needed to sustain a minimal life-form like LUCA are all exergonic and all occur spontaneously. It is as if someone intentionally rigged things so that life would become inevitable. Under hydrothermal vent conditions, if even one of these reactions were endergonic, the core metabolic reactions would all grind to a halt, frustrating the origin of life.

Going back to our illustration of city streets and metabolic pathways, it was New York Yankees all-star catcher Yogi Berra who once said, “When you come to a fork in the road, take it.” He later explained what he meant by this enduring Yogiism. He was giving fellow baseball player and friend Joe Garagiola directions to his house. On the way there, he told Joe that he would come to a fork in the road, and regardless of what direction Joe took at the fork, he would wind up at Yogi’s house. As it turns out, Berra’s directions were well thought out.

Berra’s directions seem apropos when it comes to the origin of life. No matter what route you take, whether it is one influenced by a creation model approach or one shaped by an evolutionary approach, you will wind up at the same place. Life’s origin appears to have been orchestrated by a Mind and its design has been well planned. No matter how hard some might try, teleology can’t be side-stepped in biology.

The Optimal Design of Metabolism

Prebiotic Chemistry and the Anthropic Principle

Scientific Challenges to the Origin of Life at Hydrothermal Vents

Self-Assembly of Protein Machines: Evidence for Evolution or Creation?

I finally upgraded my iPhone a few weeks ago from a 5s to an 8 Plus. I had little choice. The battery on my...
Biochemistry

Functional DNA amid Piles of Junk

Sometimes my daughters' bedrooms are unbelievably messy. Junk everywhere. It often looks like a clothes bomb detonated. I have no idea how they can...
Biochemistry

“It’s like déjá vu all over again.” This expression, attributed to Hall of Fame catcher Yogi Berra, has become synonymous for something that happens...
Biochemistry