As a little kid, I spent many a Saturday afternoon “helping” my dad work on our family car. What a clunker.

We didn’t have a garage, so we parked our car on the street in front of the house. Our home was built into a hillside and the only way to get to our house was to climb a long flight of stairs from the street.

I wasn’t very old at the time—maybe 6 or 7—so my job was to serve as my dad’s gofer. Instead of asking me to carry his toolbox up and down the flight of stairs, he would send me back and forth when he needed a particular tool. It usually went like this: “Fuz, go get me a screwdriver.” Up and down the stairs I would go. And, when I returned: “That’s the wrong screwdriver. Get me the one with the flat head.” Again, after I returned from another roundtrip on the stairs: “No, the one with the flat head and the blue handle.” Up and down the stairs I went, but again: “Why did you bring all of the screwdrivers? Take the rest of them back up the stairs and put them in the toolbox.” By the time he finished working on our car I was frustrated and exhausted.

Even though I didn’t have a lot of fun helping my dad, I did enjoy peering under the hood of our car. I was fascinated by the engine. From my vantage point as a little kid, the car’s engine seemed to be bewilderingly complex. And somehow my dad knew what to do to make the car run. Clearly, he understood how it was designed and assembled.

As a graduate student, when I began studying biochemistry in earnest, I was taken aback by the bewildering complexity of the cell’s chemical systems. Like an automobile engine, the cell’s complexity isn’t haphazard, but instead displays a remarkable degree of order and organization. There is an underlying ingenuity to the way biochemical systems are put together and the way they operate. And, for the most part, biochemists have acquired a good understanding of how these systems are designed.

Along these lines, one of the most remarkable and provocative insights into biochemical systems has been the discovery of protein complexes that serve the cell as molecular-scale machines and motors—many of which bear an eerie similarity to man-made machines. Two recent studies illustrate this stunning similarity by revealing new information about the structure and function of two protein complexes that are part of the electron transport chain: the F1-F0 ATPase and respiratory complex I. These ubiquitous protein complexes are two of the most important enzymes in biology because of the central role they play in energy-harvesting reactions.

This well-studied protein complex plays a key role in harvesting energy for the cell to use. F1-F0 ATPase is a molecular-scale rotary motor (see figure 1). The F1 portion of the complex is mushroom-shaped and extends above the membrane’s surface. The “button of the mushroom” literally corresponds to an engine turbine. The F1-F0 ATPase turbine interacts with the part of the complex that looks like a “mushroom stalk.” This stalk-like component functions as a rotor. 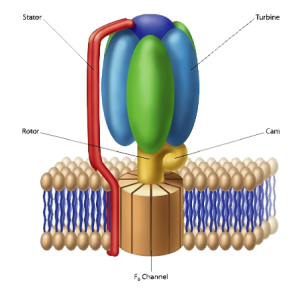 The flow of positively charged hydrogen ions through the F0 component, embedded in the cell membrane, drives the rotation of the rotor. A rod-shaped protein structure that also extends above the membrane surface serves as a stator. This protein rod interacts with the turbine, holding it stationary as the rotor rotates.

The electrical current that flows through the channels of the F0 complex is transformed into mechanical energy, which then drives the rotor’s movement. A cam that extends at a right angle from the rotor’s surface causes displacements of the turbine. These back-and-forth motions are used to produce ATP.

Even though biochemists have learned a lot about this protein complex, they still don’t understand some things. Recently, a team of collaborators from the US determined the path that protons take as they move through the F0 component embedded in the inner membrane.1

To accomplish this feat, the research team trapped the enzyme complex into a single conformation by fusing the stator to the rotor. This procedure exposed the channels in the F0 complex and revealed the precise path taken by the protons as they move across the inner membrane. As protons shuttle through these channels, they trigger conformational changes that drive the rotation of the rotor by one full turn for each proton as it moves through the channel.

Respiratory complex I serves as the first enzyme complex of the electron transport chain. This complex transfers high-energy electrons from a compound called nicotinamide adenine dinucleotide (NADH) to a small molecule associated with the inner membrane of mitochondria called coenzyme Q. The high-energy electrons of NADH are captured during glycolysis and the Kreb’s cycle, two metabolic pathways involved in the breakdown of the sugar, glucose. 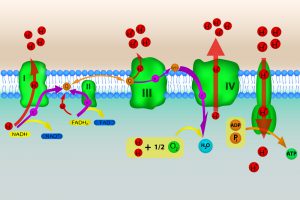 Massive in size, 45 individual protein subunits comprise respiratory complex I. The subunits interact to form two arms, one embedded in the inner membrane and one extending into the mitochondrial matrix. The two arms are arranged to form an L-shaped geometry.

Figure 3: A cartoon of respiratory complex I. Image credit: Wikipedia

The electron transfer process occurs in the peripheral arm that extends into the mitochondrial matrix (upward in figure 3). Conversely, the proton transport mechanism takes place in the membrane-embedded arm (to the right).

The mechanism of proton translocation across the inner membrane served as the focus of a study conducted by a research team from Oxford University in the UK.2 These researchers discovered that proton transport across the inner membrane is driven by the machine-like behavior of respiratory complex I. The process of transferring electrons through the peripheral arm results in conformational changes (changes in shape) in this part of the complex. This conformational change drives the motion of an alpha-helix cylinder like a piston in the membrane arm of the complex. The pumping motion of the alpha-helix causes three other cylinders to tilt and, in doing so, opens up channels for protons to move through the membrane arm of the complex.

Biochemists’ discovery of enzymes with machine-like domains, as exemplified by F1-F0 ATPase and respiratory complex I, revitalize the Watchmaker argument. Popularized by William Paley in the eighteenth century, this argument states that as a watch requires a watchmaker, so, too, does life require a Creator.

This simple yet powerful analogy has been challenged by skeptics like David Hume, who assert that the necessary conclusion of a Creator, based on analogical reasoning, is only compelling if there is a high degree of similarity between the objects that form the analogy. Skeptics have long argued that nature and a watch are sufficiently dissimilar so that the conclusion drawn from the Watchmaker argument is unsound.

But due to the striking similarity between the machine parts of these enzymes and man-made devices, the discovery of enzymes with domains that are direct analogs to man-made devices addresses this concern. Toward this end, it is provocative that the more we learn about enzyme complexes such as F1-F0 ATPase, the more its machine-like character becomes apparent. It is also thought-provoking that as biochemists study the structure and function of protein complexes, new examples of analogs to man-made machines emerge. In both cases, the Watchmaker argument receives new vitality.

As a little kid, peering under the hood of our family car and watching my father work on the engine convinced me that some really smart people who knew what they were doing designed and built that machine. In like manner, the remarkable machine-like properties displayed by many protein complexes in the cell make it rational to conclude that life comes from the work of a Mind.

For several decades, biochemists thought a vast proportion of most organisms’ genomes consisted of junk—DNA sequences that once had value but decayed into nonfunctional...
Biochemistry

Stress can take a serious toll on human health, making the pursuit of happiness seem all the more imperative. But recent research suggests that...
Biochemistry