A common challenge I often hear is that creationism and intelligent design are showstoppers for science. If we conclude that “God did it,” skeptics complain, “wouldn’t that shut down scientific inquiry?”

A few years ago, I had a brief email exchange with a prominent origin-of-life researcher who sincerely raised that concern:

“I would be interested in how you think the creation model approach . . . will lead to scientific advance. Your book Origins of Life clearly showed that science does not have all the answers to how life may have begun, and of course I agree with that conclusion. What this means to me is that we have some beautiful open questions to work on to try to find the answers. But in your book, at the end of each chapter, you typically ended with the creationist answer to open questions: God did it. This is what I meant by stopping the questioning process. If the answer is that God did it, where do we go from there?”

I responded to this concern elsewhere, but, at this juncture, I would like to point out that the evolutionary paradigm can also shut down scientific inquiry, delaying the discovery of key scientific insights, and often with important biomedical implications.

The evolutionary paradigm can also shut down scientific inquiry, delaying the discovery of key scientific insights, and often with important biomedical implications.

This point is powerfully illustrated by the latest work by a team of researchers from Duke University.1 These investigators demonstrated that the highly repetitive satellite DNA associated with centromeres displays function.

From within the evolutionary framework, this discovery was unexpected. Most molecular biologists have long viewed highly repetitive DNA sequences as nonfunctional. In fact, much of the satellite DNA sequences in the human genome (which comprise 10 percent of the genetic makeup of humans) have been ignored by the research community, because of the influence of the evolutionary paradigm. These sequences have long been regarded as the leftover vestiges of an unguided, evolutionary history.

A press release from Duke University describing this latest work acknowledges this omission: “Even though the sequence of the human genome was declared complete more than a decade ago, it retains several glaring gaps, especially in the repetitive sequences around centromeres.”2

Sequencing highly repetitive DNA sequences is extremely challenging, to be sure. And this is part of the reason for the gaps in the human genome sequence. But, because of the influence of the evolutionary paradigm, few, if any, biologists thought these repetitive sequences were anything other than junk. Viewing satellite DNA as junk took away any motivation on the part of molecular biologists to “plow ahead” and try to determine these recalcitrant DNA sequences.

On the other hand, a creation model/intelligent design perspective predicts that nearly all of the DNA sequences found within the human genome would display function—including highly repetitive satellite DNA sequences. And this prediction is satisfied by the latest insights from the Duke research team.

To be fair, the Duke researchers were working from an evolutionary framework. So, why were they studying satellite DNA, if other life scientists chose to ignore these sequences? The researchers from Duke University were trying to understand the structure-function relationships of centromeres.

These chromosomal regions are made up of highly repetitive DNA dubbed alpha satellite DNA and comprise about 5 percent of the human genomes. Centromeres serve as the attachment site for replicated chromosomes during the cell division process. 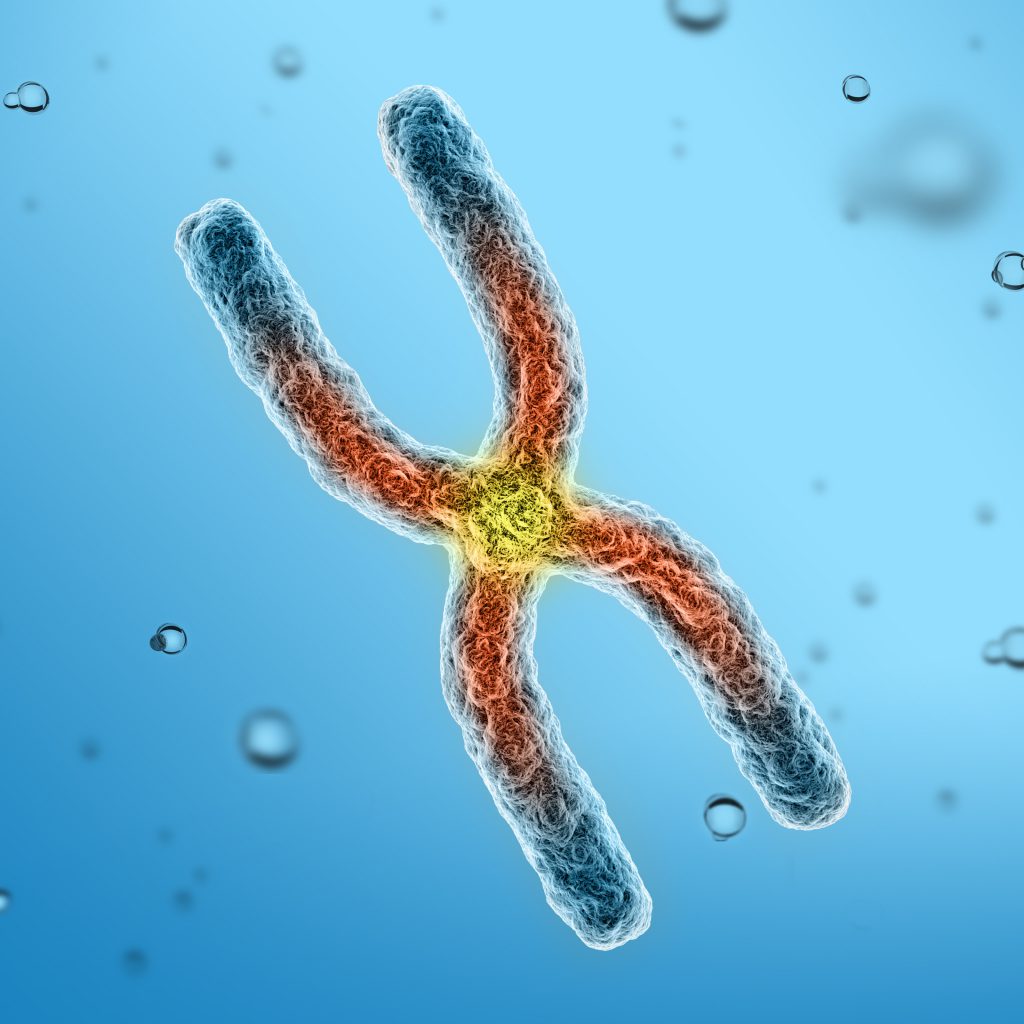 The alpha satellite DNA of centromeres displays several layers of organization that are built upon a 171 base pair (bp) unit called a monomer. In turn, these monomers are repeated numerous times to form higher order repeats (HORs). The size of the HOR is specific for each of the 22 autosomes and 2 sex chromosomes that comprise the human genome. For example, the HOR of chromosome X consists of 12 monomers, while the HOR of chromosome 8 is made up of six monomers. The next level of organization, called HOR arrays, arises from the extensively repeated occurrence of HORs.

There can be two or more HOR arrays within centromeres. For example, chromosome 17—the subject of the Duke University study—possesses two HOR arrays, dubbed D17Z1 and D17Z1-B.

Proteins comprising the kinetochore bind to one or the other HOR array on chromosome 17. (The kinetochore protein complex binds to the centromere, serving as an attachment site for the mitotic spindle, which pulls apart the sister chromosomes during cell division.) 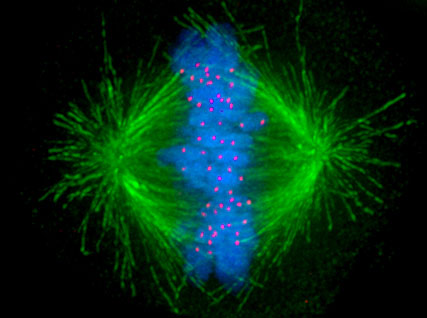 Variations in the Repetitive DNA of Centromeres

In an attempt to determine why one site is used for centromere assembly as opposed to the other, the researchers from Duke University discovered sequence and size variations for the monomers used to build the HOR arrays. And this variation plays a key role in dictating the site for centromere assembly. They also discovered that some sequence and size variants display a loss of functional competency. In other words, this variability can cause the chromosome to become unstable and/or the mitotic spindle fails to properly form. The researchers think that these failures may lead to increased risks of cancer, birth defects, and infertility.

If the instability becomes too great, the centromere will assemble at alternate HOR array sites, explaining why (for 30 percent of the population) centromere assembly occurs at different sites for the sister chromosomes of human chromosome 17.

This work indicates that repetitive DNA sequences within the human genome do, indeed, possess functional attributes, just as creationists and intelligent design adherents have predicted. And the researchers think that their insight is only the beginning. Beth Sullivan, the senior researcher for the project stated:

“What we found in this study is probably the tip of the iceberg. There could be all sorts of functional consequences to having variation within the complex, repetitive portion of the genome that we don’t know about yet.”3

Implications for Evolutionary and Creation Models

Many regard the shared “junk DNA” sequences in the genomes of humans and the Great Apes as the most compelling evidence for evolution. When the human genome sequence was first reported in the early 2000s, geneticists estimated that at least 95 percent of human DNA sequences are junk.

Over the last decade, discovery after discovery has demonstrated that many classes of junk DNA display function. In fact, the ENCODE project indicates that a vast proportion of the human genome is functional, not junk.

Recent work by Duke University scientists demonstrates that, in spite of skepticism over the ENCODE project results, researchers continue to discover new functions for junk DNA. It turns out that these repetitive sequences serve a role in the process of cell division, expanding the role of junk DNA beyond regulating gene expression.

But in spite of these discoveries, many evolutionary biologists doggedly cling to the view that junk DNA must be nonfunctional because of their deep-seated commitment to the evolutionary paradigm. All of this makes me wonder:

Is the skepticism about the functional utility of junk DNA—fueled by the demands of the evolutionary paradigm—a science stopper?

Mutations, Cancer, and the Case for a Creator

Cancer. Perhaps no other word evokes more fear, anger, and hopelessness. It goes without saying that cancer is an insidious disease. People who get...
Biochemistry

Like most children in the early 1970s, my Saturday morning routine centered round cartoon shows.
Biology

More Anthropic Reasons for the Extreme Fine-Tuning of Dark Energy

Years ago, in a paper published in the Astrophysical Journal, theoretical physicist Lawrence Krauss referred to dark energy as presenting “the most extreme fine-tuning...
Biology