It’s one of the classic episodes of I Love Lucy. Originally aired on September 15, 1952, the episode entitled “Job Switching” finds Lucy and Ethel working at a candy factory. They have been assigned to an assembly line, where they are supposed to pick up pieces of candy from a moving conveyor belt, wrap them, and place the candy back on the assembly line. But the conveyor belt moves too fast for Lucy and Ethel to keep up. Eventually, they both start stuffing pieces of candy into their mouths, under their hats, and in their blouses, as fast as they can as pieces of candy on the assembly line quickly move beyond their reach—a scene of comedic brilliance.

This chaotic (albeit hilarious) scene is a good analogy for how neurons would transmit electrical signals throughout the nervous system if not for the clever design of the axons that project from the nerve cell’s soma, or cell body.

The principles that undergird the design of axons were recently discovered by a team of bioengineers at the University of California, San Diego (UCSD).1 Insights such as this highlight the elegant designs that characterize biological systems—designs worthy to be called the Creator’s handiwork—no joke.

The primary component of the nervous system (the brain, spinal cord, and the peripheral system of nerves), neurons are electrically excitable cells, thanks to electrochemical processes that take place across their cell membranes. These electrochemical activities allow the cells to receive and send electrical signals. By connecting to each other through specialized structures called synapses, neurons form pathways that transmit information throughout the nervous system. Neurologists refer to these pathways as neural circuits.

The heart of a neuron is the soma or cell body. This portion of the cell harbors the nucleus. Two sets of projections emanate from the soma: dendrites and axons. Dendrites are “tree-like” projections that extend from the soma into the synaptic space. Receptors on the surface of dendrites bind neurotransmitters deposited by adjacent neurons in the synapse. These binding events trigger an electrical signal that travels along the length of the dendrites to the soma. On the other hand, axons conduct electrical impulses away from the soma toward the synapse where this signal triggers the release of neurotransmitters into the extracellular medium, initiating electrical activity in the dendrites of adjacent neurons. Many dendrites feed the soma, but the soma gives rise to only a single axon, though the axon can branch extensively for some types of nerve cells. Axons vary significantly in terms of their diameter and length. Their diameter ranges from 1 to 20 microns. Axons can be quite long, up to a meter in length. 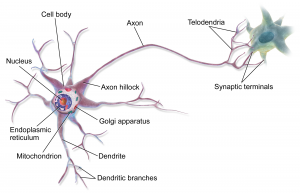 The electrical excitability of neurons stems from the charge separation across its cell or plasma membrane that arises due to concentration differences in positively charged sodium, potassium, and calcium ions between the cell’s interior and exterior surroundings. This charge difference sets up a voltage across the membrane that is maintained by the activity of proteins embedded within the membranes called ion pumps. This voltage is called the resting potential. When the neuron binds neurotransmitters, this event triggers membrane-bound proteins called ion channels to open up, allowing ions to flow across the membrane. This causes a localized change in the membrane voltage that propagates along the length of the dendrite or axon. This propagating voltage change is called an action potential. When the action potential reaches the end of the axon, it triggers the release of neurotransmitters into the synaptic space.

Why Are Neurons the Way They Are?

The UCSD researchers wanted to understand the principles that undergird the neuron design, specifically why the length and diameter of the axons varies so much. Previous studies indicate that axons aren’t structured to minimize the use of cellular material—otherwise they wouldn’t be so long and convoluted. Nor are they structured for speed because axons don’t propagate electrical signals as fast as they could, theoretically speaking.

Even though the UCSD bioengineers adhere to the evolutionary paradigm, they were convinced that design principles must exist that explain the anatomy and physiology of neurons. From my perspective, their conviction is uncharacteristic of many life scientists because of the nature of evolutionary mechanisms (unguided, historically contingent processes that co-opt and cobble together existing designs to create new biological systems). Based on these mechanisms, there need not be any rationale for why things are the way they are. In fact, many evolutionary biologists view most biological systems as flawed, imperfect systems that are little more than kludge jobs.

But their conviction paid off. They discovered an elegant rationale that explains the variation in axon lengths.

The UCSD investigators reasoned that the cellular architecture of axons may reflect a trade-off between (1) the speed of signal transduction along the axon, and (2) the time it takes the axon to reset the resting potential after the action potential propagates along the length of the axon and to ready the cell for the next round of neurotransmitter release.

If not for this optimization, then signal transmission along axons would suffer the same fate as the pieces of candy on the assembly line manned by Lucy and Ethel. Things would become a jumbled mess along the length of the axons and at the synaptic terminus. And, if this happened, the information transmitted by the neurons would be lost.

The researchers concluded that the axon diameter—and, more importantly, its length—are varied to ensure that the refraction ratio remains as close to 1.0 as possible. This design principle explains why the shape, length, and width of axons varies so much. The reset time (refractory period) cannot be substantially altered. But the axon geometry can be altered, and this variation controls the transmission time of the electrical signal along the axon. To put it another way, axon geometry is analogous to slowing down or speeding up the conveyor belt to ensure that the candy factory workers can wrap as many pieces of candy as possible, without having to eat any or tuck them under their hats.

The Importance of Axon Geometry

The researchers from UCSD think that the design principles they have uncovered may be helpful in understanding some neurological disorders. They reason that if a disease leads to changes in neuronal anatomy, the axon geometry may no longer be optimized (causing the refraction ratio to deviate from its ideal value). This deviation will lead to loss of information when nerve cells transmit electrical signals through neural circuits, potentially contributing to the etiology of neurological diseases.

Axon Geometry and the Case for Creation

The elegant, optimized, sophisticated, and ingenious design displayed by axon geometry is the type of evidence that convinced me, as an agnostic graduate student studying biochemistry, that life must stem from the work of a Creator. The designs we observe in biology (and biochemistry) are precisely the types of designs that we would expect to see if a Creator was responsible for life’s origin, history, and design.

On the other hand, evolutionary mechanisms (based on unguided, directionless processes that rely on co-opting and modifying existing designs to create biological innovation) are expected to yield biological designs that are inherently limited and flawed. For many life scientists, the varying length and meandering, convoluted paths taken by axons serve as a reminder that evolution produces imperfect designs, just good enough for survival, but nothing more.

And, in spite of this impoverished view of biology, the UCSD bioengineers were convinced that there must be a design principle that explained the variable length of axons. And herein lies the dilemma faced by many life scientists. The paradigm they embrace demands that they view biological systems as flawed and imperfect. Yet, biological systems appear to be designed for a purpose. And, hence, biologists can’t stop from using design language when they describe the structure and function of these systems. Nor can they keep themselves from seeking design principles when they study the architecture and operation of these systems. In other words, many life scientists operate as if life was the product of a Creator’s handiwork, though they might vehemently deny God’s influence in shaping biology—and even go as far as denying God’s existence. In this particular case, the commitment these researchers had to a de facto design paradigm paid off handsomely for them—and scientific advance.

Along these lines, it is provocative that the insights the researchers gleaned regarding axon geometry and the refraction ratio may well translate into improved designs for neural networks and machine-learning systems. The idea that biological designs can inspire engineering and technology advances makes possible a new argument for God’s existence—one I have named the converse Watchmaker argument.

The argument goes something like this: if biological designs are the work of a Creator, then these systems should be so well-designed that they can serve as engineering models and otherwise inspire the development of new technologies.

At some level, I find the converse Watchmaker argument more compelling than the classical Watchmaker analogy. Again, it is remarkable to me that biological designs can inspire engineering efforts.

It is even more astounding to think that engineers would turn to biological designs to inspire their work if biological systems were truly generated by an unguided, historically contingent process, as evolutionary biologists claim.

Using biological designs to guide engineering efforts seems to be fundamentally incompatible with an evolutionary explanation for life’s origin and history. To think otherwise is only possible after taking a few swigs of “Vitameatavegamin” mix.

It is now obvious to all planetary scientists that Earth possesses many apparently designed features that have enabled it to support life for billions...
Geology & Earth

Each day new discoveries provide more evidence for God’s existence and the Bible’s reliability—but the research often remains buried in the academic journals. So...
Design