This blog series on Reflections is intended to encourage Christians to read more vigorously by providing a beginner’s guide to some of the Christian classics in such fields as theology, philosophy, and apologetics. Hopefully a very brief introduction to these important Christian texts will motivate today’s believers, as St. Augustine was called to in his dramatic conversion to Christianity, to “take up and read” (Latin: <em>Tolle lege</em>) these classic books. 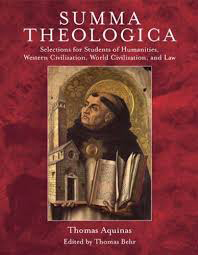 This week’s book, Summa Theologica by St. Thomas Aquinas, is considered a classic text both in the world of academic philosophy as well as in Western literature. Written almost 750 years ago, it is considered a masterpiece of historic Christian philosophy and theology.

St. Thomas Aquinas (1225–1274) may have had the brightest mind in the history of Christendom. A medieval scholastic philosopher and theologian, Aquinas’s system of thought (called “Thomism”) was declared the official philosophy of the Roman Catholic Church. In a life span of less than 50 years, he became a voluminous writer and a masterful defender of classical Christian theism. For more about him and his accomplishments, see my article “Christian Thinkers 101: A Crash Course on St. Thomas Aquinas.”

Thomas Aquinas’s Summa Theologica is arguably his magnum opus even though he died before completing it. Written in the latter part of his life (ca. 1265–1274), the work reflects Thomas at the height of his intellectual prowess and is thus not for the faint of heart. More than 1,000 pages in length, it is an extremely rigorous philosophical work written for students of philosophy and theology. And those students need to be on the ball to track with Thomas’s razor-sharp logic.

The work is divided into three major parts. Part one addresses God’s existence, attributes, and Triune nature, along with topics such as angels, the creation of the world, and the nature of human beings. Part two focuses on Christian ethics and virtue. Part three explores the person of Christ, sacraments, and Christian eschatology (end times).

Thomas Aquinas writes in the Summa Theologica concerning the nature of God:

Summa Theologica is a timeless exploration and defense of classical Christian theism by arguably Christendom’s finest philosopher. The work’s best-known section is Aquinas’s Five Ways—or proofs for the existence of God. But this classic text is so much more that that: it truly reflects the view that Christian theology is indeed the queen of the sciences.

While Thomas Aquinas’s work distinctly defends the Roman Catholic vision of Christendom, Christians from other theological traditions have much to both agree and disagree with in this incredible book. It is appropriately listed in Encyclopaedia Britannica’s Great Books of the Western World series.

We can all benefit from succinct, well-stated insights from people who have thought through theological ideas. I like to draw attention to these nuggets...
Education

St. Bonaventure was one of the great thinkers of the Middle Ages, but what exactly did he believe, and what else did he contribute...
Education

One of the most popular requests received at Reasons To Believe (RTB) is for guidance in choosing a science curriculum for Christian school and...
Education