“Aliens May Have Sent a ‘Strong Message’ from Deep in Space, Scientists Claim” (Independent)

“Not a Drill: SETI Is Investigating a Possible Extraterrestrial Signal from Deep Space” (Observer)

These headlines accompanied the announcement of a candidate SETI signal by a team of scientists using a telescope located in Russia. For those who like difficult-to-remember names, the telescope is the RATAN-600 radio telescope in Zelenchukskaya, in the Karachay-Cherkess Republic of Russia. While no official scientific publications accompanied the announcement, the results will be presented at an international conference in Mexico in late September 2016. Given all of the hype surrounding the “signal,” I thought it worthwhile to provide some perspective.

On May 15, 2015, the RATAN-600 telescope observed a signal at 11 GHz with an amplitude of 0.75 janskys. While not a particularly strong signal, it is well above background noise. The configuration of the RATAN-600 telescope results in an unusual beam on the sky (highly elongated in the north-south direction), making a precise location difficult to determine. However, the signal is consistent with the direction of a star called HD 164595. Some images of the data have circulated around the Internet (since the official data has not yet been published). As the example below shows, the signal lasted for a couple of seconds and is well above background noise. 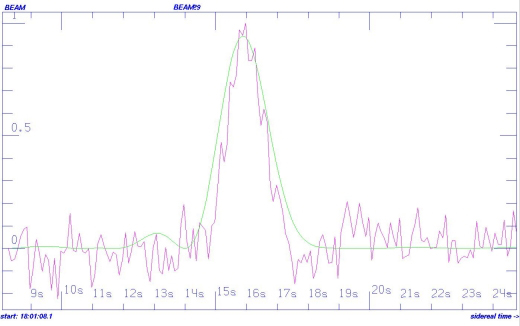 Why It Is Interesting

HD 164595 is a star with similar characteristics to the sun. It has an estimated age of 6.3 billion years (4.6 billion for the sun) and 99 percent the mass of the sun. The metallicity of HD 164595 matches the sun’s, and the star hosts a Neptune-sized planet orbiting with a period of 40 days (Mercury takes 88 days to complete one revolution). The dynamics of the exoplanet allow for other exoplanets around the star, although none have been detected yet. A distance of 94 light-years makes HD 164595 a next-door neighbor in astronomical terms—the center of the Milky Way galaxy resides 25,000 light-years away.

If the signal detected by the RATAN-600 telescope originates from a planet or moon orbiting HD 164595, then the proximity of the star means that we can investigate it in much more detail over the next couple of decades as our planet-finding technology increases. Even our current technology would allow for sending a probe that would reach the planet in a few centuries.

First, according to the Space.com article, the team observed the direction of HD 164595 nearly 40 times and only detected the signal on one of the observations. While it’s possible that some alien civilization turned on a beacon for just a short period that the team happened to detect, the lack of reproducibility makes a more mundane explanation probable. This measurement will likely join the Wow! signal and the Valentine’s Day monopole on the list of results that scientists can never fully explain.

Second, assuming the signal does originate from HD 164595, astronomers can estimate the amount of power required to generate such a signal. A civilization beaming the signal toward Earth would require more than a trillion watts of power to accomplish the task. Collectively, the world’s population uses (on average) about 10 trillion watts of energy, so this alien civilization would have had to harness at least one-tenth of the world’s energy. If no beaming occurred and the signal went out isotropically into the galaxy, it would require hundreds of times more energy than the surface of the Earth receives from the sun! Wait a second—maybe this explains why the signal lasted for such a short period of time.

Third, the characteristics of the RATAN-600 telescope introduce some ambiguity regarding the nature of the measurement. The unusual beam pattern of the telescope is consistent with the location of HD 164595 but by no means demands that the signal originates from that direction. Also, normal SETI searches utilize a much narrower frequency band (roughly 1 billion times narrower). The wide bandwidth of RATAN-600 greatly increases the possible explanations of the measured signal.

Even SETI astronomers are skeptical that the signal represents communication from aliens as they monitor the region with the Allen Telescope Array. Nothing yet, but I’ll keep you informed of anything new.

UPDATE (September 6, 2016)
According to SETI astronomer Seth Shostak, a concerted effort to confirm the RATAN-600 measurement with the Allen Telescope Array found nothing. Additionally, the Russian Academy of Sciences declared that the signal in question originated from a Soviet military satellite.

Earth’s neighbor Mars has created a lot of discovery-driven headlines lately. In one, scientists found seasonal variation of methane in the atmosphere. In another,...
Geology & Earth

Q&A: Are Dark Matter and Dark Energy Just “Props” for the Big Bang?

From Gavin: I always enjoy and profit by listening to RTB’s scholars discussing and interviewing others on various creation-science, theological-philosophical, and biblical topics. I am...
Astronomy