What is the most compelling evidence for human evolution?

Many people would say it’s the close genetic similarity between humans and chimpanzees. Proponents of the evolutionary paradigm assert that the structure of human chromosome 2 provides axiomatic evidence that humans evolved from a shared ancestor with chimpanzees and bonobos.

Backed by decades of research, this claim seems formidable. But deeper investigation exposes weakness in the evolutionary explanation.

Chromosomes are large structures visible in the nucleus during the cell-division process. These structures consist of DNA combined with proteins in a specialized way to form the chromosome’s highly condensed, hierarchical architecture. 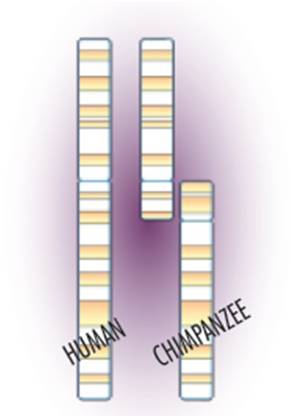 Evolutionary biologists posit the fusion of two chimpanzee chromosomes to generate what is now human chromosome 2.

Each species has a characteristic number of chromosomes differing in size and shape. For example, humans have 46 chromosomes; chimpanzees and other apes have 48.

When exposed to certain dyes, chromosomes will stain in unique ways––yielding a pattern of bands along their length. The bands vary in number, location, thickness, and intensity. And the unique banding profile of each chromosome helps geneticists identify them under a microscope.

In the 1970s evolutionary biologists began to exploit staining techniques in an attempt to discern evolutionary relationships among various species based on chromosome banding patterns. From that time onward, researchers have believed these patterns point to something fundamental, because chromosome structure indirectly reflects an organism’s genetic makeup.

As already noted, the most noticeable difference between human and chimp chromosomes is the quantity: 46 for humans and 48 for chimpanzees. Evolutionary biologists account for this difference by suggesting that two chimp chromosomes (2A and 2B) fused. They think this fusion generated what is now human chromosome 2.

Evolutionary biologists claim that this fusion took place in the human lineage some time after it separated from the evolutionary lineage that led to chimpanzees and bonobos. In other words, the apparent fusion of the two chimpanzee chromosomes is taken as evidence for common descent and a shared ancestry for humans and chimps.

I concur that the evidence strongly suggests that human chromosome 2 appears to be a fusion product. But upon careful reflection, I do not see support for the notion of common descent, but rather for the handiwork of a Creator.

Even though human chromosome 2 looks like it arose through a fusion event, it seems unlikely that its genesis resulted from undirected natural processes. The combining of two chromosomes to make human chromosome 2 would have required a succession of several highly improbable events.

It is not unusual for chromosomes to fuse. When chromosomes break, “sticky ends” result. These sticky ends will readily combine with other chromosomes that have also broken apart. But they will almost never fuse with intact chromosomes due to the presence of telomeres. In addition to providing stability, telomeres are designed to prevent chromosomes from undergoing fusion with chromosome fragments.

For human chromosome 2 to arise, it would have required either telomere-telomere fusion (a virtual impossibility), or fusion of an intact chromosome at its telomere with a sticky end generated when another chromosome fractured near its telomere. This type of fusion can happen, but it is a rare occurrence.

The event would have had to occur in one of the gametes (sperm and egg cells), changing the number of chromosomes. When the chromosome number in the sperm doesn’t match that of the egg , fertilization almost always results in either: (1) a nonviable zygote/embryo; (2) a viable offspring that suffers from a diseased state; or (3) a viable but infertile offspring. Again, it is possible, but extremely rare for the resulting offspring to be viable and fertile.

Finally, once the fusion took place between chimp chromosomes 2A and 2B, there would have had to have been what evolutionary biologists call a selective sweep. This event occurs when a mutation imparts such a large advantage that it rapidly sweeps through the population, becoming fixed, and reducing the genetic variability of the group.

To summarize, in order for human chromosome 2 to arise from the fusion of two chromosomes, a succession of several highly improbable events would have had to have taken place. Thus, the evolutionary account of the history of human beings seems untenable.

Rather, the highly unlikely nature of these events suggests to me that a Creator was involved. As I have previously written, based on the biblical text, a high degree of genetic similarity (which would include similarity of chromosomes) between humans and chimpanzees (and the other apes) can be expected. Could it be that the apparent fusion of two chromosomes to produce human chromosome 2 tells us something about how the Creator made human beings?

Genesis 1:26 – 27 uses two different Hebrew words to describe humanity’s creation: asa and bara. Both imply God’s direct involvement, but asa indicates that God made human beings from existing material, whereas bara signifies the creation of something entirely new. In light of Genesis 2:7, this distinction could be understood to indicate that God used a preexisting “template” that he then reshaped to create the physical makeup of human beings, to which he then imparted his image. Could it be that part of the reshaping activity involved fusing together two chromosomes to make human chromosome 2?

After all, genetic engineers—who are made in God’s image—are capable of altering organisms by manipulating genetic material. Would it not then follow that the Creator might do the same? Could God be thought of as a Divine genetic engineer? It seems no manipulation of the data, but instead a reasonable conclusion drawn from scientific advance shedding light on ancient biblical texts.

The earliest optical image of galaxies demonstrates that the early universe was inhospitable for life, pointing to a planned arrival for life and, eventually,...
Human Origins & Anthropology

If you are like most people, you probably haven’t devoted much thought to earwax, unless it relates to the safest way to clean it...
Evolution

The discovery of two ancient ovens in Jordan provides evidence that humans were making bread at a time consistent with the Bible’s account of...
Human Origins & Anthropology