What are the two most known chemical compounds? Clearly water (H2O) takes first place, but with all the discussion of global warming, carbon dioxide (CO2) probably comes in a close second. Curiously, the existence of carbon dioxide relies on a careful balance of the laws of physics.

A few minutes after the big bang, the only elements in the universe were hydrogen and helium (and miniscule amounts of lithium and beryllium). Not until a few hundred million years later did stars form that could make heavier elements. Most stars fuse hydrogen into helium, but some are large enough to fuse helium into carbon. Fusion requires two nuclei (each with a positive charge) to join together. Consequently, the strength of the strong nuclear and electromagnetic forces affects how the process works and what configurations of protons and neutrons are stable. Carbon production requires three helium nuclei to come together at the same time—an extremely unlikely event, but three “coincidences” ensure adequate carbon in the universe.

The carbon nucleus has an energy level that sits just above the combined energy of a beryllium-8 and helium nucleus. This causes a resonance that dramatically increases the rate of carbon production. For an analogy, consider pushing someone on a swing. If you give small pushes at random times, the swing remains almost at a standstill, but if you push at just the right period (i.e., at the resonant frequency), the swing will go higher and higher. Consequently, the rate of carbon formation occurs more rapidly because of this resonance than if the energy level was far from or below the combined energy of the beryllium-8 and helium nucleus.

In fact, this latter condition would slow the reaction down dramatically, which provides the third “coincidence” necessary for the universe to contain sufficient carbon for life. The interiors of stars (where this fusion occurs) reach temperatures difficult to imagine: over 100,000,000oC! The temperature required for carbon production matches that for carbon to join with helium to make oxygen. The reaction that fuses carbon and helium happens at a sufficient rate to produce the oxygen required by life. If oxygen had a resonant energy level similar to carbon, all the carbon produced in stars would immediately fuse into oxygen. However, the relevant energy level in oxygen is just below the combined energy of a carbon and helium nucleus. Thus, large stars produce sufficient quantities of oxygen and carbon.1

Scientists have understood the basic theoretical framework to explain the production of carbon and oxygen for decades, and recent efforts have calculated key elements of this framework from the fundamental elements of the universe. Given this knowledge, scientists can analyze how the universe would differ as the strength of the strong nuclear and electromagnetic forces change. A paper published by Max Tegmark graphs such an analysis, showing that small changes in the strengths of these forces result in a universe incapable of hosting life (see figure 1). More importantly, the configuration of the forces that permit life’s essential features (stable carbon, stars, hydrogen) matches the requirements for the triple coincidence necessary for producing carbon and oxygen in stars. 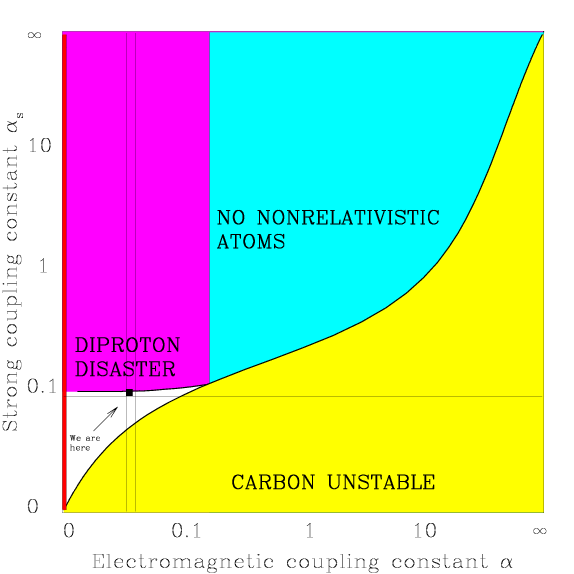 Reflecting on these coincidences, Fred Hoyle commented, “a common sense interpretation of the facts suggests that a super-intellect has monkeyed with physics, as well as with chemistry and biology.”2 I would agree. These discoveries demonstrate scientists’ ability to explain how the universe produced the carbon and oxygen necessary for life. The remarkable aspect of this knowledge relates to the fact that the laws of physics match the only configuration of those laws that permit life.

Nearly three years ago, I predicted that scientists would find the Higgs boson by the end of 2012. Well, news from the past week...
Physics & Mathematics

New Boson Measurements Shed Light on Physics of the Universe

I remember sitting in a crowded room of scientists back in February 2003. The Wilkinson Microwave Anisotropy Probe (WMAP) had launched a couple of...
Physics & Mathematics

Detailed astronomical observations continue to provide evidence that the fundamental laws of physics have not changed over time, as predicted by RTB’s cosmic creation...
Physics & Mathematics