Paleontologists recently discovered fossil specimens of a shrimp-like creature with an advanced brain, optic lobes, and a cardiovascular system like those found in modern arthropods. This creature lived about 520 million years ago and was part of the Cambrian explosion. This discovery provides added support for the RTB creation model while also exacerbating the problems the Cambrian causes for the evolutionary paradigm.

Scarecrow wanted a brain, Tin Man wanted a heart, and paleontologists wanted to discover both. Two Cambrian-era findings have granted these scientists their wish.

The exciting insight these findings provide gives paleontologists a better understanding of animal origins. It also affirms RTB’s creation model, which argues that the appearance of creatures like Fuxianhuia fits with biblical descriptions of life’s history. 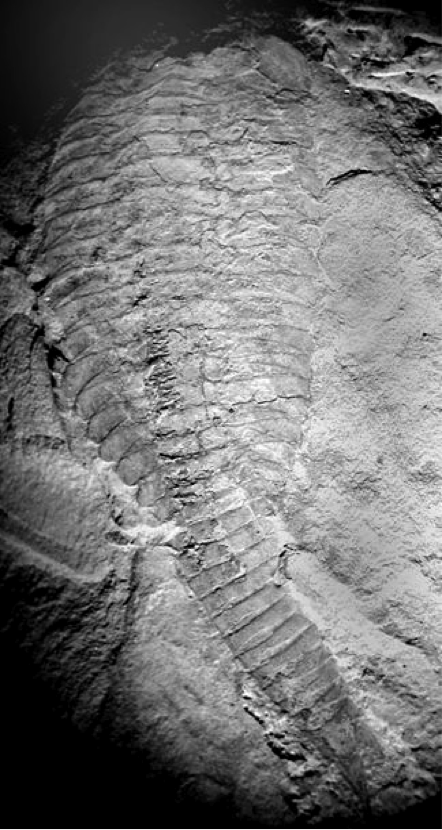 Most fossils consist of hard body parts. Since these are the most durable parts of an organism, they are more likely to endure long enough after the organism’s death for the fossilization process to preserve them. But in rare cases soft body parts are preserved. Usually, this happens when burial is rapid and the burial environment prohibits oxidation, mechanical damage, and scavenging by other animals.

Fortunately for paleontologists, a number of fossil sites have yielded a bounty of specimens with soft body parts intact. Several of these sites document the Cambrian explosion, a dramatic event that introduced 50 to 80 percent of the known animal phyla to Earth. The Fuxianhuia specimens mentioned above were recovered from Cambrian deposits in China’s Yunnan Province.

Many paleontologists maintain the Cambrian event transpired over the course of 5 to 15 million years. However, an argument could be made that the duration of the Cambrian explosion was less than 2 to 3 million years. Either way, this explosive appearance of complex animals represents a significant problem for the evolutionary paradigm.

Paleontologists didn’t expect to discover Fuxianhuia fossils with modern neural and cardiovascular systems in the early Cambrian. Researchers believe that this creature was one of the first arthropods. If so, then according to an evolutionary model, Fuxianhuia should display primitive systems, not the advanced ones of modern-day arthropods. Thus, the appearance of organisms with complex neural and cardiovascular systems further exacerbates the challenges facing the evolutionary paradigm, which requires much more time for the gradual emergence of animal phyla.

On the other hand, these discoveries make better sense from a design perspective. The Bible describes God creating swarming sea creatures (like many of the Cambrian animals) during the fifth day of creation (see Genesis 1:20–23 and Psalm 104:25–26). It seems likely that the Cambrian reflects not random processes, but the mind and the heart of an intentional Creator.

For more details on the Cambrian explosion’s implications for science-faith discussions, see these articles.

My seventh-grade science teacher asked the class to list “the three most essential needs of human life.” The “correct” answer—water, food, and sleep—illustrates how...
Evolution

Earth, which has supported advanced life over an extended period of time, may be unique in the observable universe
Design

Last week on RTB’s official Facebook page we invited people to share some of the science-faith questions their kids ask. Soon, questions poured in....
Design