Recent advances in astronomy and physics provide yet more support for the idea that the laws of physics have remained unchanged throughout the universe’s history.

For thousands of years, the Bible has been on record stating that the physical laws governing the universe do not vary. For example, Jeremiah 33:25, God declares that he “established the fixed laws of heaven and earth” (NIV, 1984). In Romans 8:20–22, Paul states that “the whole creation has been groaning” as a result of its “bondage to decay” (NIV, 1984).

The constancy of the laws of physics, if proven, would establish the Bible’s reliability in describing nature and predicting future scientific discoveries. It would also refute young-earth creationism and global flood geology as well as significantly constrain speculations about string theories and the possibility that variable scalar fields alter the character of dark energy. Also, physicists and astronomers hope that high-precision measurements of the constants of physics might reveal that “variations” can be explained by as-yet-undiscovered additional constants of physics.

As I described in previous articles1 and in my book More Than a Theory,2 physicists and astronomers have devoted several decades of research to building an arsenal of tests for constant physics. During the past few years they have developed far more powerful tests. Also, thanks to the first data release from the Planck satellite this past March, for the first time researchers can test for spatial variations on the scale of the entire universe.

Over the years, physicists have designed real-time laboratory tests for the physical laws’ constancy while astronomers have developed tests that take advantage of astronomical lookback times. In the lab, physicists have built accurate measuring instruments to test for constant physics at extreme precision levels over time scales ranging from years to decades. Laboratory measurements have established that variations any greater than four parts per hundred quadrillion (<4 x 10-17) per year cannot exist in the fine structure constant, which undergirds several of the physical laws.3 This new limit is about a hundred times more constraining than the one I described in More Than a Theory.4 Furthermore, a proposed study, based on certain ultranarrow transition lines in the spectra of neodymium and samarium, has the potential to establish limits in possible variation in the fine structure constant as low as a few parts per hundred thousand quadrillion (<4 x 10-20) per year.5

In astronomy, it takes time for light from the stars, galaxies, and quasars to reach telescopes. Simply by observing galaxies and quasars at varying distances, astronomers can directly measure the values of several fundamental constants of physics at distant times in the past history of the universe. This technique allows researchers to test for constant physics over the past 10–13 billion years. For example, they confirmed with 99 percent certainty that possible variations in the fine structure must be less than two parts per 10 quadrillion per year over the past 10 billion years.6This limit is about a thousand times more constraining than the one I described in More Than a Theory.7

Astronomers have placed comparable constraints on the proton-to-electron mass ratio.8 Upper limits to possible variation of Newton’s gravitational constant, while not as good, are still quite impressive. Lunar laser ranging tests have established that variations in the gravitational constant must be less than 8 x 10-13 per year.9

Researchers long to measure the values of physical constants over the entire spatial extent of the universe at a fixed epoch of cosmic history. By this means astronomers would not only confirm the temporal constancy of the physical laws but also their spatial constancy.

Maps of the cosmic background radiation (the radiation left over from the cosmic creation event) are the only tool astronomers possess for measuring the physics of the entire universe at a single epoch. These maps reveal the state of the entire universe at 370,000 years after creation event, when the temperature of the universe first cooled sufficiently for atoms to begin to form. Atom formation allows astronomers to detect density variations in the universe, which are manifested by temperature fluctuations in the cosmic background radiation.

Astronomers produced the first map of the cosmic background radiation with the COBE (Cosmic Background Explorer) satellite in 1992 (see figure 1). This map, however, was far too crude to reveal any possible variations in the physical laws. 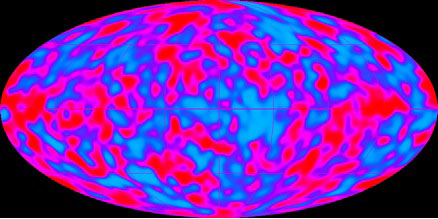 Figure 1: Map of the temperature fluctuations in the cosmic background radiation produced by the COBE Satellite.
Image credit: NASA

To produce a detailed map of the temperature variations in the cosmic background radiation, NASA orbited the Wilkinson Microwave Anisotropy Probe, in 2001, with the objective of gathering data over a period of several years. Figure 2 shows the map, released in 2003, produced from the first year of data collection. Figure 3 presents the final satellite-produced map, released in December 2012, which shows the results from nine years of continuous observations. This last map was precise enough to ascertain that the universe experienced hyper-inflationary expansion just 10-34 seconds after the cosmic creation event and that the hot spots in the cosmic background radiation do indeed evolve to become clusters of galaxies while the cold spots become the voids between the galaxy clusters. Despite the final WMAP’s improvement over the COBE satellite image, it still lacked the precision to provide any meaningful test of the constancy of physics.

In 2009, the European Space Agency (ESA) orbited the Planck satellite. The ESA released the map from the first 15 months of data collection in March 2013 (see figure 4). 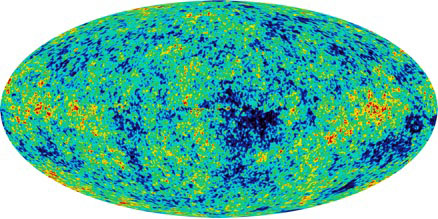 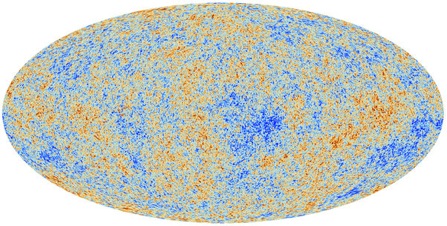 On June 5, 2013, four astrophysicists from the Center for Cosmology at the University of California, Irvine posted a preprint of a paper10 they submitted to Physical Review Letters. There they present analysis of the Planck satellite map for the purpose of constraining spatial variations in the fine-structure constant. The UC Irvine team noted that spatial variations in the fine-structure constant would cause higher order correlations in the temperature fluctuations of the cosmic background radiation. These correlations, they explained, would result from Thompson scattering of cosmic background radiation photons.

Failure to detect any such correlations led the research group to conclude that the fine-structure constant did not vary from place to place within the entire extent of the cosmos, at least at the epoch of the first formation of atoms. However, the team also concluded that this particular constraint was not very robust. They were able to place a limit of 1.34 ± 5.82 x 10-2 for angular scales of tens of degrees and above on the possible variations.11 That is, they established that the fine-structure constant cannot vary spatially over the extent of the cosmos by more than ten percent.

At the start of their analysis, the UC Irvine team acknowledged that they were not likely to achieve a robust constraint. However, they also knew that the ESA is committed to continually operating the Planck satellite for many more years to come. As with the WMAP, several years of integrated data should produce a substantially more detailed map of the cosmic background radiation (see figures 2 and 3). The team’s primary goal in their published study was to show that their analysis technique can produce meaningful results. With better data, their technique will produce a robust constraint. As it is, scientists can derive satisfaction in the results produced so far.

Researchers have demonstrated—to a spectacular degree far greater than what was possible just a few years ago—that fundamental constants in physics remained fixed over the history of the universe. For the first time, astronomers have confirmed the constancy of the physical laws to the entire geographical extent of the universe. Physicists and astronomers have also developed proof-of-principle experiments and observations that soon will enable them to extend by a few orders of magnitude (factors of ten to a thousand) the precision by which they can further put the physical laws to the test.

These demonstrations carry several important implications for the Christian faith. First, they testify to the Bible’s capacity to provide a breeding ground for scientific discoveries far into the future. Among the holy books that undergird the world’s religions, the Bible stands alone in making statements about the natural realm that were beyond the knowledge and understanding of its human authors and their contemporaries.

Second, they disprove young-earth creationism. All young-earth creation models depend upon physical laws that altered radically (by factors of a million times or more) either at the time of Adam’s sin in the Garden or Eden or at the time of Noah’s flood. (The ages of the universe and Earth depend on the values of the physical constants.) Yet direct measurements prove that the physical laws have not altered, even to the slightest degree, at any time in the past. Furthermore, as already noted, the Bible itself explicitly states the physical laws have never undergone a change.

Third, limits on possible variability of certain fundamental physics constants are now low enough to constrain dark energy models that “invoke rolling scalar fields,”12 that is, some kind of cosmic quintessence. They are also low enough to eliminate a set of string theory models in physics. Thus, already, for example, limits on the possible variability of the electron-to-proton mass ratio are helping astronomers develop a more detailed picture of both the cosmic creation event and the subsequent history of the universe. Such achievements have yielded, and will continue to yield, more evidence for the biblical model for the universe’s origin and development.

As mentioned earlier, astronomers and physicists in the future could discover some slight variability in certain physical constants without violating the biblically supported declaration that the laws of physics do not change. There is still plenty of room in cosmological models for the possible existence of undiscovered physical constants. Such unknown constants, if they exist, could make it appear that one or more of the known constants are varying slightly when, in fact, they are not. However, we anticipate that any discovery of new constants will further support the supernatural, super-intelligent design of cosmic physics for the benefit of life––human life in particular. RTB will keep you posted.

Since 1970 various versions of an exciting “science apologetics” story have appeared in books, newspapers, and magazines across the United States and beyond. Many...
Bible

People ask me whether or not reincarnation actually happens, why a loving God wouldn’t give people multiple chances to pass the test of life,...
Worldviews

Many independent sets of observations confirm that only about six percent of all the ordinary matter (neutrons and protons) in the universe is made...
Design