A fundamental assumption in the scientific investigation of living things is that the components of an organism or cell have specific functions. The evidence for design in nature at both the macro (organismal) and micro (cellular) levels is overwhelming. Reverse engineering of natural machines, in addition to revealing their purpose in nature, has revealed new technologies for useful human applications. Consider the seahorse tail, which was recently highlighted in the journal Science.

Unlike most tails, the seahorse tail is not round; rather, it is square. Seahorse tails are comprised of square prisms interconnected through three types of specialized joints that allow bending and twisting motions. These joints are the ball-and-socket, peg-and-socket, and gliding joints. The question is, why a square tail instead of the usual round one?

Pressure was applied to the two model tails, and it was found that the square tail returned to its original shape after deformation, while the round tail did not. Deformation did not alter the square tail’s exterior shape, while the round tail remained deformed. Additionally, the square tail was better at grasping things. Though the round tail could twist and bend to a greater degree than the more rigid square tail, the combination of rigidity and strength with the ability to bend, twist, and grasp is of great benefit to the seahorse. These features allow the seahorse to attach to important structures in its environment as well as protect itself against predators.

This study of the seahorse tail showed that reverse engineering of a biological component could be used to determine its important functions for the life of the organism. However, another benefit of this approach was the identification of design features that could have useful functions for us, like in developing new types of robotic devices. The article states:

The combination of articulated rigid plates and elastic deformability observed in a seahorse tail could strike a promising balance between the two dominant paradigms in robotics design: being lighter and more compliant than traditional “hard” robots built from servos and metal, but more robust and resistant to external tractions than the emerging class of “soft” robots with silicone-membrane bodies.

When we take an even closer look inside a single cell, we observe a great myriad of molecular machines that are needed to carry out the cell’s function. These machines are required for DNA replication, RNA synthesis, energy production (like ATP synthase), protein and lipid synthesis, cellular motion, and the transport of molecules within, into, and out of the cell.

As with the seahorse tail, understanding the molecular details of how these machines work has inspired the creation of new areas of technology—like biomimetics—directed toward the reverse engineering of nanomolecular machines to carry out useful functions for medical and other applications. Recently, Dr. Fazale Rana described this technology in his article “Engineers’ Muse: The Design of Biochemical Systems.”2 The study of how all the molecular machines work together to carry out the life processes of a cell is another area of research called systems biology.

Research in this field has inspired the development of new companies aimed at developing computer software to understand the interconnectedness of the molecular machines in cellular processes and then make beneficial predictions. One such company is MetaCell, headed by Dr. Stephen Larson. In a recent TEDx talk, Larson described the cell as follows:

As science continues to reveal how life works, we find again and again that the magic that seems to distinguish between things that are alive and things that are not [is] actually created by complex interacting molecular machines. These microscopic machines are as precise and intricate as a mechanical watch, but instead of being run on gears and springs, are powered by the fundamental rules of physics and chemistry.3

On the one hand, [the bacterium is] extremely well organized. But on the other hand, the sheer scale of all this unfamiliar, well-organized stuff that happens in there makes me feel that I’ve stumbled onto an alternate landscape of technology that’s built by an engineer a million times smarter than me. The more that I search for principles beyond the ones we’ve already learned, the more I am overwhelmed with the feeling that this stuff was built by aliens.4

A great deal of human intelligence is required to build a mimetic of any natural machine. When we look inside the cell, we seem to have, as Larson stated, “stumbled onto an alternate landscape of technology that’s built by an engineer a million times smarter than [us].” The design inside the cell is consistent with the conclusion that it is the product of a mind—one much greater than any human mind. And though Larson proposed an alien source, I believe that mind belongs to the God of the Bible. 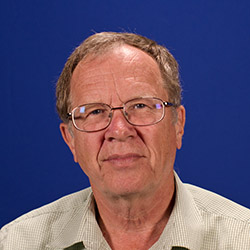 Dr. Russell W. Carlson received his PhD in biochemistry from the University of Colorado in 1976, and currently serves as emeritus professor of biochemistry and molecular biology at the University of Georgia in Athens, GA, where he is also the executive technical director of the Complex Carbohydrate Research Center.

A Critical Reflection on Adam and the Genome, Part 1

Who doesn’t like a bargain? I sure do. And I am a sucker for 2-for-1 specials. For those interested in science-faith discussions, the recent...
Design

The Flagellum’s Hook Connects to the Case for a Creator

What would you say is the most readily recognizable scientific icon? Is it DNA, a telescope, or maybe a test tube?
Biochemistry

Have you ever wondered how birds and insects can fly through heavy rainfall without adverse consequences? Researchers have discovered that their wings are exquisitely...
Design