A recent campaign by the Royal Ontario Museum to collect more fossils from the Burgess Shale site in the Canadian Rockies has added to the number of fossil specimens of a highly enigmatic creature called Pikaia gracilens.

Taking advantage of the new fossils, two paleontologists interpreted Pikaia to be a member of the phylum Chordata. This interpretation raises problems for the evolutionary explanation for life’s history, while at the same time provides support for the RTB creation model.

On February 26, 2012, family and friends gathered in Dyess, Arkansas, to celebrate the late Johnny Cash’s 80th birthday. The country singer’s boyhood home is located in this rural community. Built in the 1930s, the dilapidated structure is set for restoration.

The prospects of refurbishing the house where Cash grew up is a moving experience for his family. His daughter Rosanne Cash was quoted in the March 1, 2012 issue of Rolling Stone, saying, “The last time I was at the house I was thinking about how many times my dad must have walked that road as a little boy.” And who could have imagined that the road leading away from Cash’s home would have taken him where it did: to become one of the most important and influential country music artists.

Many biologists experience the same sentiments as Rosanne Cash when they contemplate the significance of the extinct Pikaia gracilens, a worm-like organism that was only the size of a human finger (see image).

This creature—primitive in its features—was among the first chordates. From an evolutionary perspective Pikaia is viewed as a representative of the common ancestor to all vertebrates: fish, amphibians, reptiles, birds, mammals, and ultimately human beings.

According to the late evolutionary biologist, Stephen Jay Gould, in his book Wonderful Life, “If you wish to ask the question of the ages—why do humans exist?—a major part of the answer…must be: because Pikaia survived the Burgess decimation.”1 And who could have imagined that the evolutionary pathway leading away from Pikaia’s time on Earth would have taken this creature where it did: to become a human being.

Evolutionists may be tempted to wax poetic about the significance of Pikaia, but, ironically, this creature’s existence raises fundamental questions about the validity of the evolutionary paradigm. In fact, recent insight into the biology of Pikaia actually supports the notion that a Creator is responsible for orchestrating life’s history.

Pikaia gracilens and the Cambrian Explosion

The Cambrian explosion describes a dramatic event in life’s history when 50 to 80 percent of the known animal phyla appeared over a relatively short window of time (perhaps as narrow as 2 to 3 million years). The Burgess Shale, located in the Canadian Rockies, is one of the most important geological sites for Cambrian fossils. 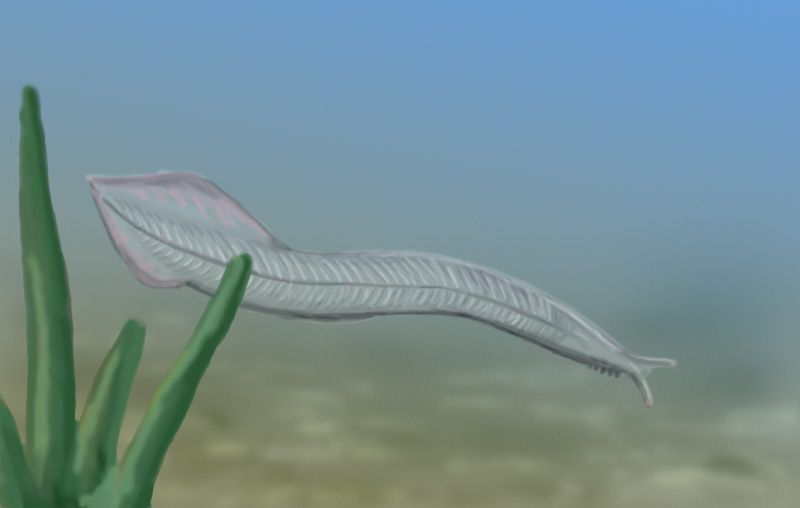 Pikaia gracilens fossil specimens are found in relative abundance in the Burgess Shale. Most of the fossils in the Burgess Shale derive from arthropods, sponges, and priapulids. Pikaia is somewhat of an odd ball, not falling into any of these categories. In the 1970s, British paleontologist Simon Conway Morris interpreted Pikaia as a primitive chordate.

In recent years, the Royal Ontario Museum has engaged in an extensive collection campaign at the Burgess Shale site. As a result, there are now around 115 known Pikaia specimens. The increased number of new fossils provides Morris with the opportunity to revisit his original interpretation.

As it turns out, he was correct: Pikaia was a chordate, a free-swimming particle feeder that lived near the ocean floor. But it appears to be an unusual chordate; many of its features don’t align with the cephalochordates or the agnathans. Morris and his coauthor, Jean-Bernard Caron, think that Pikaia was a primitive chordate. In evolutionary terms, they would place it at the base of the chordate evolutionary tree. (Listen to the March 7, 2012 episode of Science News Flash for more details on this discovery.)

Pikaia gracilens and the Theory of Evolution
On the surface, it looks as if the new research into the biology and classification of Pikaia provides important insight into chordates’ evolutionary history. But in reality, this discovery creates significant problems for the evolutionary paradigm. Morris and Caron, in their recent paper, hint at that when they conclude, “the early evolution of chordates was considerably more complex than thought.”2

Remember, it is presumed that Pikaia is a primitive chordate. Part of the problem for evolution has to do with Pikaia’s appearance in deposits that correspond to the mid-to-late Cambrian. Yet, in the Chengjian site—which corresponds to the beginning of the Cambrian—researchers have recovered a number of urochordate, hemichordate, cephalochordate, and agnathan specimens, all organisms that would be Pikaia’s evolutionary descendents. Instead of observing the sequential appearance of primitive chordates first, followed by more advanced chordates, the fossil record actually shows the simultaneous appearance of primitive and advanced chordates. This pattern is unexpected from an evolutionary perspective. (For a more detailed discussion please see “Chordate Fossils Foil Theory.”)

Pikaia gracilens and Old-Earth Creationism
From an old-earth creationist perspective, the sudden appearance of complex multicellular animal life in the Earth’s oceans—including the simultaneous occurrence of primitive and advanced chordates—serves as a signature for God’s intervention in life history. In fact, the Cambrian explosion is reminiscent of creation day 5 in Genesis, when God commands the waters to teem with life. It seems as if both Pikaia and humans were part of God’s plan all along.