What do you do when someone has a piece of food caught between his or her teeth? Call attention to it? Ignore it and hope they discover it later on their own? Either way, it is an awkward situation.

Starch grains stuck between Neanderthal teeth are causing a similarly awkward situation for a team of paleoanthropologists from the Smithsonian. Earlier this year, these researchers published a paper wherein they concluded that Neanderthals not only ate plant matter, but also cooked the plants before consuming them.1 This work indicates that Neanderthals’ diet was far more diverse than previously thought. It also implies that Neanderthals were capable of fairly sophisticated behavior, stemming from advanced cognitive ability like that possessed by modern humans. 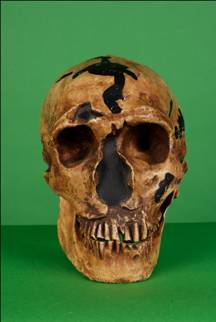 The Smithsonian researchers arrived at these conclusions after studying the dental calculus surrounding Neanderthal teeth recovered from the Shanidar (Iraq) and Spy (Belgium) caves. The researchers isolated starch grains from the dental calculus and determined, from the grains’ morphological structure, that the starches derived from grasses, dates, legumes, underground storage organs, and other plant materials. The grains also showed damage consistent with heating. Because these specimens came from two locales, the investigators concluded that cooking plant matter (which releases more nutrients from the foodstuff) was a widespread activity among Neanderthals, indicating that these creatures could effectively make use of resources in their environment and utilize sophisticated gleaning and food preparation practices.

This result, together with other studies, suggests to researchers that their understanding of Neanderthal diet requires radical revision. Rather than simply consuming easy-to-kill herbivores, it looks as if these hominids were making use of a wide range of animals and plants. (For a little background on the traditional view of Neanderthal dietary practices, go here and for my response to recent discoveries about Neanderthal hunting-and-gathering behavior, go here.)

Of course, this discovery also means that RTB’s view of Neanderthals may be wrong and require revision as well.

Did Neanderthals Really Cook Their Food?

On the January 3, 2011 edition of Science News Flash, I point out that while there is good evidence that Neanderthals were consuming plants, it may be premature to conclude that they were cooking their food (and that they had advanced cognitive abilities). It’s true the damage to the starch grains appears consistent with what occurs during cooking, but it still could have arisen by some other mechanism.

Moreover, archeologists have not recovered any grinding implements, such as would be used to prep the plant matter for cooking, from the Shanidar or Spy caves, let alone any other Neanderthal site. There remains no compelling evidence that Neanderthals were cooking vegetable matter.

The Latest on Human-Chimpanzee Genetic Comparisons, Part 1 of 2

In 1891 Harley Procter commissioned a laboratory to conduct a chemical analysis that would have far-reaching impact. The laboratory determined that only 0.56% of...
Human Origins & Anthropology

"Middle Earth" is not a real place. Humans, dwarves, elves, and hobbits never lived together. But in the fall of 2004, Australian and Indonesian...
Human Origins & Anthropology

I periodically draw attention on social media to the fact that the human genome sequence is not complete. I thoroughly enjoy the reaction of...
Biochemistry