All standard planetary formation models, when applied to the solar system, are stymied by the Mars Problem. The most sophisticated planetary system models can explain the masses and orbits of the solar system’s four gas giant planets, Mercury, Venus, and Earth. According to these models, however, Mars should be as massive as, or a little more massive than, Earth—but it’s not; and the main belt of asteroids should include a few bodies as massive or nearly as massive as Mars1—but it doesn’t.

For over a decade, a team of astronomers—led by Alessandro Morbidelli of the Observatoire de la Côte d’Azur in Nice, France—toiled to solve the Mars Problem. The team’s efforts culminated in the Grand Tack model.2 This model of the solar system proposes that the solar system originally had five gas giant planets: Jupiter, Saturn, Uranus, Neptune, and another Neptune-sized planet. Jupiter ejected this fifth gas giant into interstellar space as a result of the present four gas giants “tacking” by varying degrees. A sailing term, “tacking” refers to the migration of the solar system’s gas giants: first inward toward the Sun and then outward. Figure 1 shows the migration movements, calculated by the Nice team, that are needed to solve the Mars Problem and reproduce the orbital configurations of all five of the solar system’s asteroid and comet belts. 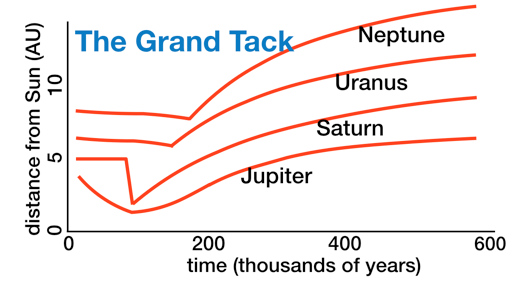 The Grand Tack model was resoundingly successful in explaining the characteristics of the present-day solar system. However, it drew a strong reaction from many astronomers for all the fine-tuned features it invoked.

To cite just one example, the Grand Tack required exquisite fine-tuning of the initial conditions and characteristics of the Sun’s protoplanetary disk, the Sun itself, and the timing and duration of the formation of each gas giant. All this fine-tuning appears necessary for Earth to sustain an intelligent species capable of creating a high-technology civilization. So much fine-tuning, all apparently in preparation for humanity, sounded too much like intelligent, purposeful design.

The fine-tuning dilemma in the Grand Tack model led to efforts to find a simpler solution to the Mars Problem. Astronomers quickly realized that the only possible alternative would be to adopt a steeper density profile for the Sun’s protoplanetary disk. In this scenario, much more of the solid material in the protoplanetary disk would accumulate near the Sun so that large rocky planets would form near the Sun rather than as far away as Mars.

In a recent issue of the Monthly Notices of the Royal Astronomical Society, a team led by André Izidoro showed that no matter what density profile one adopts for the Sun’s protoplanetary disk, it is impossible to solve the Mars Problem independent of the Grand Tack scenario.3 That is, astronomers and the rest of us really are stuck with the evidence for an extremely fine-tuned solar system. As with the fine-tuning needed to explain how the Moon formed,4 the solution to the Mars Problem is bound to cause “philosophical disquiet”5 for nontheistic astronomers. For the rest of us, we can embrace the theological implications arising from such an exquisitely fine-tuned solar system designed for the specific benefit of human beings.

Eat This: Zombies Are Real

They prey on their own kind. Some might call it cannibalism, but it’s the only way they can survive. Indeed, the zombie apocalypse is...
Biochemistry

On December 14, NASA and Google announced the discovery of an eighth planet orbiting the star Kepler 90. Other media outlets picked up the...
Astronomy

Prior to twentieth century developments in physics, scientists and philosophers had come to believe that the universe had been static for infinite time. Then...
Physics & Mathematics