When scientists failed to demonstrate a naturalistic explanation for homochirality via terrestrial chemical pathways, they turned to astronomical mechanisms. However, research continues to prove fruitless and instead, makes it clear that supernatural design is a much better explanation for the existence of life-essential homochirality.

Whenever we hear the phrase “on the other hand,” we know we are about to hear a second perspective. Just like every issue or debate has two sides, so, too, do some molecules. Any molecule with four different chemical groups attached to a central carbon manifests two distinct three-dimensional configurations. Chemists refer to these mirror image configurations as left-handed and right-handed. Such molecules are said to be chiral. 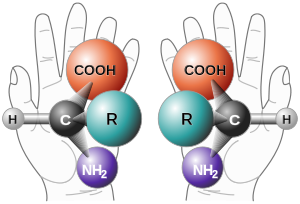 A Challenge for Naturalism
Homochirality presents a challenge to atheists, agnostics, and others who try to explain the origin of life via purely natural mechanisms. In explaining the emergence of first life, demonstrating how homochirality arises from a racemic (random mixture of left-handed and right-handed chiral molecules) is the simplest problem—but it is a problem. All laboratory demonstrations of life’s essential chemical pathways (see Fazale “Fuz” Rana’s latest book, Creating Life in the Lab) are irrelevant to solving the origin-of-life problem unless a naturalistic means for generating homochiral amino acids and pentose sugars can be proven. Such a mechanism needs to have operated under the conditions that existed on Earth at the time of life’s origin some 3.8 billion years ago. But, as Fuz and I documented in our book, Origins of Life, no possible terrestrial pathways exist for producing the homochiral molecules required for life’s emergence.

I spent 25 years looking for terrestrial mechanisms for homochirality and trying to investigate them and didn’t find any supporting evidence. Terrestrial explanations are impotent or nonviable.1

Because of this dead end, the last 15 years of research on naturalistic origins for homochiral molecules has focused on possible astronomical sources.

Looking Beyond Earth
The astronomical research quickly demonstrated the only viable source for generating homochirality is circularly polarized ultraviolet radiation that emanates from black holes and neutron stars. (The one other possible astronomical source, namely neutrinos emitted by core-collapse supernovae, is much less viable.2) In 2002, a Japanese research team used a laboratory cyclotron to simulate the kind of circularly polarized ultraviolet radiation arising from the most intense emitters from among known neutron stars and black holes. At the 13th International Conference on the Origin of Life they announced they had generated up to a 1.12 percent excess of left-handed configurations compared to right-handed configurations for the non-bioactive amino acid isovaline.3 In the peer-reviewed paper they reported generating up to a 0.65 percent excess for the bioactive amino acid alanine.4

Recently, an interdisciplinary team of nine French scientists repeated the Japanese experiment using a more comprehensive and updated astronomical database applicable to more realistic astrophysical situations.5 They reported achieving up to a 1.34 percent enantiomeric excess for alanine when they exposed the alanine to right ultraviolet circularly polarized light, and up to 0.71 percent enantiomeric excess when they exposed it to left ultraviolet circularly polarized light.

The reported 1.34 and 0.71 percent excesses match what geophysicists have found in the few meteorites that do possess amino acids (once probable contamination from terrestrial life is accounted for).6 Consequently, the French research team concluded that their “experimental result strongly supports a scenario in which the Sun was born in a massive star-forming region.”7 Such a region would have placed a number of neutron stars in close vicinity to the emerging condensation of gas and dust that led to the formation of the Sun and its system of planets.

The search for naturalistic solutions to the homochirality problem in origin-of-life research is just one challenge facing atheism, agnosticism, and similar worldviews. On the other hand, the more scientists learn about life’s emergence the more evident it becomes that nothing less than the guiding hand of supernatural, super-intelligent Being suffices to explain homochirality. A Creator easily explains how the necessary amino acids and pentose sugars became sufficiently concentrated and uncontaminated by irrelevant chemicals, how they all became homochiral, and how they became appropriately assembled into all the protein, DNA, and RNA molecules that even the simplest life-form requires.

Is Life Possible on a Moon?

The case for the supernatural design of the human-friendly Milky Way Galaxy and solar system continues to build.
Chemistry

Prebiotic Chemistry and the Hand of God

If you could time travel, would you? Would you travel to the past or the future? If asked this question, I bet many origin-of-life...
Chemistry