The BICEP2 team’s confession that they had jumped the gun in announcing their “discovery” of gravitational waves led to several expressions of distrust of the scientific enterprise. It also caused many Christian writers to conclude that cosmic inflation is a myth and that the big bang theory is not all it is cracked up to be.2 These reactions motivated the BICEP2 team to release a paper in which they cautioned lay authors not to throw out the baby (inflation and the big bang creation model) with the bathwater (their premature announcement of discovering gravitational waves).3

The BICEP2 telescope is designed to detect the B-mode polarization signal of the cosmic microwave background radiation (CMBR), the heat radiation that remains from the cosmic creation event. Once the background noise from cosmic dust is removed and, assuming the remaining signal is strong enough to be accurately measured, this B-mode signal will reveal to astronomers whether the universe experienced an inflation event very early in its history, and, if it did, exactly what kind of inflation event it experienced. 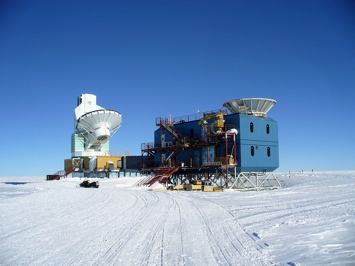 Thanks to the SPT team’s efforts, the big bang model has passed yet another test. Its prediction of a cosmic inflation event has proven correct. This is good news for Christians because for more than 2,500 years the Bible and biblical commentaries were the only books proclaiming the fundamental features of big bang cosmology:

Owing to a multitude of observational verifications of the big bang creation model, Christians possess a powerful tool for demonstrating the inspiration, inerrancy, and predictive power of the Bible.

In the near future, I think that the South Pole telescopes and the Planck satellite will produce even more accurate B- and E-mode polarization measurements of the CMBR. These results will tell us what kind of inflation the universe has experienced. That knowledge may reveal some new cosmic design features that could further strengthen the scientific case for a personal God who created and designed the universe for the specific benefit of human beings.

Life Signature in Venus’s Atmosphere: Genuine or Not?

Scientists are designing a telescope capable of directly imaging extrasolar earth-like planets, and their efforts will likely yield more evidence for a creator’s fine-tuning....
Astronomy