“What? You mean to tell me that Sherlock Holmes wasn’t real!?”

Some fictional characters are so instantiated in our collective psyche that we often think of them as actual people who once lived, though they never did. Based on recent work by researchers from Tel Aviv University in Israel, it appears as if the same may be true in physical anthropology.

While investigating the mystery of human origins, these scientists have come to think that Australopithecus sediba—a recently discovered hominid believed to be a key transitional intermediate leading to modern humans—may well be a fictional species.1

Whether A. sediba is real or fictional has huge implications for how anthropologists think humans evolved and also highlights just how speculative the ideas in human evolution can be. 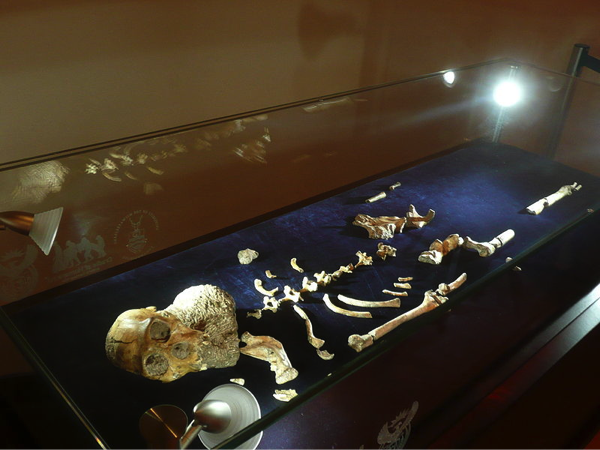 In 2011, a research team from the University of Witwatersrand, led by paleoanthropologist Lee Berger, created quite a bit of excitement when they presented a detailed anatomical analysis of the newly discovered A. sediba.2 These researchers first reported on their discovery in the spring of 2010, after Berger and his 9-year-old son stumbled upon two partial hominid skeletons while exploring Malapa Cave (South Africa).3 Excavations revealed the remains may have been from a juvenile male and an adult female. The hominids were initially dated between 1.78 and 1.95 million years in age. More careful dating places the remains at 1.977 million years old.

The Malapa fossils are well preserved and remarkably complete compared to most hominid finds, allowing paleontologists to perform a detailed anatomical analysis of the specimens. A. sediba represents an enigma. Overall it looks like an australopithecine. It has a small brain and long arms, designed for movement through trees. Yet, analysis of the A. sediba skulls indicate that this animal’s brain structure is distinct with unusual features in the frontal lobe. Moreover, A. sediba’s pelvis and ankle joints look like they should belong to the genus Homo. The A. sediba hand is interesting, too. It appears designed for high precision manipulation of objects, like a Homo hand, with a long thumb and short fingers.

Berger and his colleagues believe that their discovery uproots conventional views of human evolution. They argue that A. sediba supplants “Lucy” (Australopithecus afarensis) as the transitional intermediate that gave rise to Homo habilis and which, in turn, gave rise to Homo erectus. In fact, they believe that A. sediba is the direct ancestor to H. erectus, not H. habilis. This interpretation renders H. habilis an evolutionary dead end.

But Berger’s interpretation, shared by many paleoanthropologists, may not be correct. In fact, the problem may be more serious than where to place A. sediba in the human evolutionary tree. According to Ella Been and Yoel Rak, physical anthropologists from Tel Aviv University, A. sediba may not even be an actual species. Been and Rak carefully studied the spine and jaw of the A. sediba remains and concluded that the fossil finds consist of four individuals, not just a juvenile male and adult female as Berger thought. Instead of representing a single species, the fossils come from two separate genera: Australopithecus and Homo. The Tel Aviv anthropologists argue that the fossil remains from these four individuals have been jumbled together, thus giving the impression they represent a distinct species (sediba) with the mosaic characteristics expected for a transitional form. In other words, A. sediba may be a fictional hominid.

Ironically, shortly after A. sediba was discovered in 2010 another species, Homo gautengensis, was also unearthed in South Africa.4 This creature, too, dates to about 2 million years in age, and may well be the oldest member of the Homo genus. The scientists who discovered H. gautengensis claim its coexistence with A. sediba makes it unlikely that A. sediba could be the transitional form linking the australopithecines to Homo.

In communications with the general public, the central ideas associated with human evolution are often portrayed as certain and well supported by the fossil record. Yet, further analysis of A. sediba suggests otherwise. In reality, paleoanthropologists have no idea how many hominids existed or how these creatures relate to each other in an evolutionary sense. Nor do they know which hominids are truly part of the presumed evolutionary pathway that led to modern humans. With all this uncertainty, some measure of skepticism about human evolution is justified.

Paleoanthropologists Mixed Up about Neanderthal Behavior

It’s easy to get confused—especially when working on something complicated. Not many things are more convoluted than trying to figure out the behavior of...
Human Origins & Anthropology

Music Points to a Creator

This February marked the 50th anniversary of The Beatles’ arrival in America. My article “Beatlemania Plus 50: Can Christians Appreciate the Fab Four?” explored...
Human Origins & Anthropology