Are men and women biologically different, or is our gender malleable? Nutrition science provides an unexpected source of answers for this question.

When clinical nutritionists conduct a dietary evaluation, they need to know the genetic gender of the patient to make an accurate assessment of their health. Men and women require very different body fat percentages (BF%) to be healthy. According to the American Council on Exercise, women may require 100% more body fat to be healthy compared to men. The body fat requirement is so different between men and women that the healthy ranges don’t even overlap (see table). 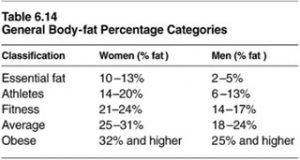 Source: Natalie Digate Muth, “What Are the Guidelines for Percentage of Body Fat Loss?”, American Council on Exercise (ACE), December 2, 2009.

A young male can have a body fat percentage of 6% and be in perfect condition. If a female were at 6% she could be very ill. The health effects of body fat percentages can be seen in female long-distance runners. If their body fat percentage drops much below 12%, then they may stop menstruating. (It goes without saying that if young women lose the ability to reproduce, it won’t bode well for the human race.) Body fat percentage is also a concern when genetic females try to reduce body fat to achieve a chiseled physique when competing as body builders. Getting body fat percentage down to a point where women can show a six-pack can have serious health consequences.

Men and women also tend to have very different perceptions of body image based on body fat percentage. In my nutrition practice over the past 30 years it has been difficult to get men to realize that above-normal weight increases risk for chronic disease. Men tend to perceive overweight as acceptable or even advantageous, thus increasing their risk of chronic disease. On the other hand, women that are normal weight more frequently perceive that they are overweight and are less accepting of their weight. This has been a challenging paradigm when assessing health risk and counseling patients in proper health behaviors and diet to reduce disease risk. Treating gender as malleable could further exacerbate this issue. 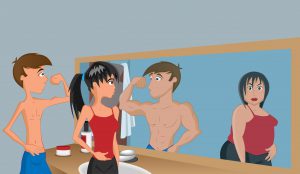 For many nutrients, men and women have similar intake requirements, but several vary substantially. As a case in point, the recommended dietary allowance (RDA) for iron intake1 is 8 mg/day for men 19-50 years old and 18 mg/day for women 19-50 years old, with the requirement increasing by 50% for women during pregnancy. The current intake in the US is typically the reverse of the requirement. Men are consuming more dietary iron than women. Ignoring genetic gender when determining micronutrient requirements could further intensify the imbalance of dietary iron intake and put the person at increased risk for iron deficiency anemia.

Males and females also have different calcium requirements. The RDAs call for 1,200 mg of calcium daily for women 51­–70 years old and 1,000 mg of calcium for men 51–­70 years old.2 This difference in the RDA may not seem significant, but obtaining this additional calcium for post-menopausal women is critical for osteoporosis prevention. According to the Centers for Disease Control, rates of osteoporosis for American adults over the age 65 are 5.1% for men and 24.5% for women.3

Finally, folic acid needs vary for women depending on the phase of the life cycle. Women of childbearing years need 400 mg/day, but that increases to 600 mg/day for women who are pregnant.

From a nutritional metabolic perspective, men and women have unique nutritional needs. Surgeries can be performed to simulate the opposite gender morphologically, but these operations do not change the genetic makeup of the individual or the nutritional demands connected to their genetic gender.

Insights from nutritional science truly reflect what Scripture teaches about the distinctiveness of humans as male and female. When God created human beings in the beginning, he made them as two complementary genders. Nutrition science teaches us that this distinction isn’t an arbitrary designation. Real and significant physiological differences exist between men and women.

Reasons to Believe authors and resources seek to engage individuals who hold very divergent worldviews. And in all of our interactions we approach those with differing views with gentleness and respect (1 Peter 3:15). We do this not only because God asks us to, but because it is the compassionate thing to do when people are considering the basic foundation that frames their existence. As difficult and unnerving it is to question one’s worldview, how much more unsettling might it be for those who are questioning their personal identity.

All people, regardless of their station in life, bear the image of God and deserve respect. As Christians, we have a guiding principle to follow 1 Peter 3:15 by acting in a loving, compassionate way. One of the most loving things we can do is gently and properly inform people who struggle with gender identity issues of the importance of accurately considering their genetic identity when making decisions regarding nutritional requirements and consuming a proper diet.

Looking to our Creator and Designer may be the best place to start to find a path to address this complicated issue.

More Viruses Than Stars? No Way!

When others learn I’m a virologist, they often respond with questions such as, “Are viruses alive?” When they learn that I’m a Christian, they...
Biology

Symbiosis- More Complex Than We Knew

Biological symbiosis, the mutual dependence of two species on each other (such as bees and flowers) for survival, has often been cited as evidence...
Biology

In a classic scene from Alice in Wonderland, the story’s heroine informs the White Queen, “One can’t believe impossible things,” to which, the White...
Biology