Skip to content
One of the promises Christians hold dear—and invite nontheists to consider—is that as humans place their faith in the redemptive work of Christ, the infinite personal God of the Bible will live in us. Thus, our bodies are “temples” of the Holy Spirit and we are not our own but have been bought with a price (1 Corinthians 6:19–20). The apostle Paul then admonishes us to “honor God with your bodies.”

In light of these admonitions, Christians, of all people, ought to carefully reflect on how we care for our bodies. Part of that care entails that we eat, exercise, sleep, and live with the awareness that we are not only keeping our bodies healthy but also honoring the temple of the Holy Spirit.

But with all of the conflicting advice online, in the press, and on TV touting the health benefits of various diets, how do we know if a particular diet honors God? Not only do trending diets differ, but they seem to be polar opposites. With low-fat diets, fat is the enemy and carbohydrates are a friend; yet the Keto diet proclaims carbohydrates the enemy and fat a friend. It doesn’t end there. With the vegan diet, animal products are the enemy; yet with the popular paleo diet whole food animal products mark the pinnacle of health benefits. And two of the most popular diets, Atkins and Ornish, actually combine two of the polar opposites to make double opposites (see figure 1). The Atkins diet is high in fat and high in animal products while the Ornish diet is low in fat and low in animal products. 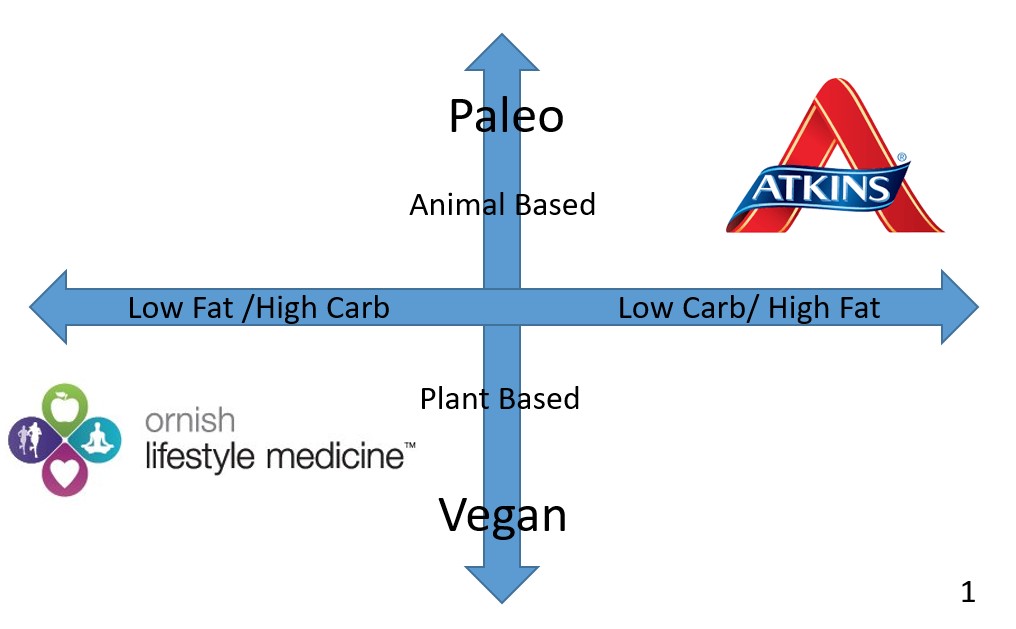 Recommendations from nutritional scientists do not appear to clarify the issue because each diet cites scientific evidence showing that it works. Nutritional scientist Ehsan Ghaedi conducted a systematic review and meta-analysis of randomized controlled trials on the effect of the paleo diet on cardiovascular disease (CVD) risk and found significant reductions in several risk factors.1 Concurrently, doctors at Kaiser Permanente have recommended a vegetarian diet low in animal proteins.2

What if the macronutrient percentage of carbohydrates and fat that many people focus on isn’t the main issue? What if the diet doctors are crediting the wrong component of their diet for the beneficial effects?

All the diets appear to have some proof that they reduce the risk of certain diseases. Thus, maybe a better question to ask is this: Do they all provide something in common that is at least partially responsible for the positive effect?

There are at least two principles on which all of the diet proponents agree:

Over 50% of the American diet is highly processed (see figure 2).3 That means colors, flavors, and textures have been added to make the food look like something it is not. Most of these foods are high in added sugar and low in nutrients and fiber, making it no surprise that Americans suffer from an epidemic of noncommunicable diseases. 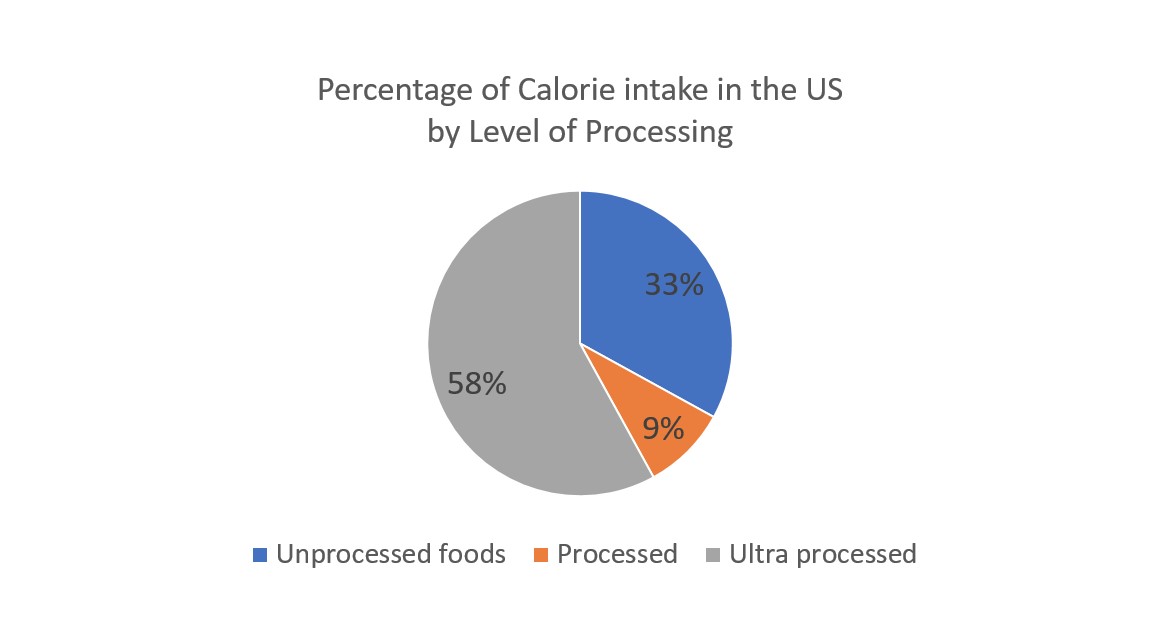 Increasing added sugar consumption (a classic identifier of the SAD) in the second half of the twentieth century was likely one of the primary contributors to the rise in heart disease during that same period. Researcher Quanhe Yang shows the association of added sugar to heart disease.4 Compared to subjects who only consume 7.40% of their calories from added sugar (shown in blue), those who consumed 25.2% of their calories from added sugar saw a 143% increased risk of CVD mortality. Perhaps one of the main benefits of trending diets may stem from substituting whole foods for more processed foods. 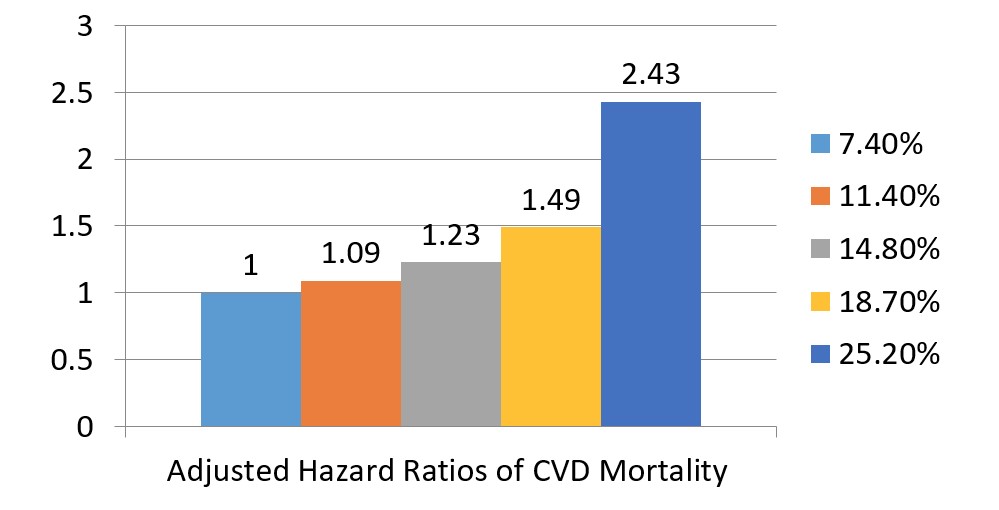 Figure 3: Hazard Ratios of CVD Mortality According to Usual % of Calories from Added Sugar. The CVD risk for the lowest sugar consumers is set at 1, the other levels of sugar consumption are shown as the percentage increase in CVD compared to the lowest consumers. Image credit: Yang et al., 2014

A second point of agreement among diet experts calls for consumption of an abundance of nonstarchy vegetables. This is not a new idea. The Bible prescribed vegetables as central to the human diet thousands of years ago: “Then God said, ‘I give you every seed-bearing plant on the face of the whole earth and every tree that has fruit with seed in it. They will be yours for food’” (Genesis 1:29). 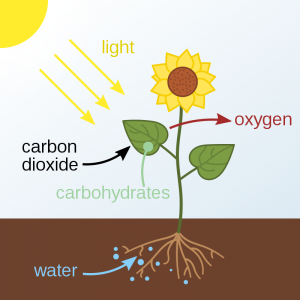 When humans digest glucose from plants the body breaks the chemical bonds, releasing the sun’s energy to fuel the body. Green plants also provide the oxygen humans need for life. It’s an amazing symbiotic relationship—one that speaks of intentional design—that we enjoy with green plants! Humans consume carbohydrates and oxygen, break down carbohydrates, gain the energy, and breathe out CO2. Plants take in the CO2 and energy from the sun and make the carbohydrates, and the cycle continues. All of the energy we receive from carbohydrates, fats, and protein is captured energy from the sun.

Another way to look at it from an ultimate perspective is to see that the sun provides all the natural energy for our physical life just as the Son provides all we need for our spiritual life. In this way, the sun gives us as a physical picture of what the Son has done for us spiritually. Romans 1:20 states that “God’s invisible qualities—his eternal power and divine nature—have been clearly seen, being understood from what has been made, so that people are without excuse.” All the benefits the sun bestows to humans point us to its Creator.

Further benefits that nature’s Creator provides include energy from green plants and also vitamins, minerals, and phytonutrients (compounds associated with positive health effects). As seen below, one cup of spinach provides only 7 calories but is packed with nutrients. 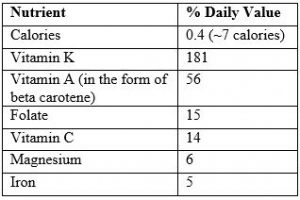 Cruciferous veggies (broccoli, cauliflower, cabbage, etc.) contain Indole-3-carbinol and sulforaphane, which have been found to reduce the risk of colorectal and other forms of cancer.6 The allium vegetables (onions and garlic) contain diallyl sulfides that have been shown to suppress many forms of cancer.7 Garlic has been shown to reduce blood cholesterol by suppressing hydroxy-methyl-glutaryl CoA reductase, which is the rate-limiting step in cholesterol synthesis. Finally, by one estimate a diet rich in fruits and vegetables reduces risk for heart disease by 15% and stroke by 27%.8

Christians believe that human bodies have been “fearfully and wonderfully made” (Psalm 139:14). As such, our bodies flourish on a wide variety of whole foods. To be sure, food processing confers many benefits, including the ability to store and ship foods safely across the globe. Nevertheless, in a comparatively wealthy Western society where overconsumption of tasty, processed foods contributes to disease, we would be wise to heed the common wisdom described in the two dietary principles. They are consistent with biblical wisdom and lead to healthy living.

A watching world seeks to understand the wisdom of Christianity on many fronts, including whether it is “good” for humanity. Here we can demonstrate to a skeptic that indeed, Scripture resonates with scientific understanding of nutrition and promotes human flourishing. More than that, it implores us “whether you eat or drink or whatever you do, do it all for the glory of God.”

One More Crack in the Mirror: Misplaced Hope in the Latest Model for the Origin of Life

Many of us are told that compelling scientific evidence exists for the emergence of life from inanimate matter via chemical evolution (also known as...
Chemistry

Discovery of the rapid destruction of amino acids in astronomical environments continues to highlight problems in naturalistic models of life’s origin(s). The “follow-the-water” philosophy...
Chemistry

The hall-of-fame catcher Yogi Berra is reputed to have said, “When you come to a fork in the road, take it.” Origin-of-life researchers have...
Chemistry