Have you ever been embarrassed by burping in a public setting? I have. I remember a time I was speaking before an audience of a thousand-plus people and my message was also being live-streamed to the internet when I let out a loud burp into the microphone. My gaffe got the audience laughing and made them more comfortable listening to a science nerd talk about scientific evidences for the Christian faith.

Just like some good came out of my embarrassing burp, likewise a whole lot of good came from a massive burp that erupted from Earth’s interior billions of years ago. Without that burp there would be no civilization, no human race, and no advanced life of any kind.

To be sure, Earth’s interior has been releasing gas continuously throughout its history. Earth’s ongoing plate tectonic activity guarantees such a steady release of gas. A new set of measurements, however, reveals that a huge eruption of volatiles (gases) from Earth’s mantle led, in large part, to the transition from the Archaean Eon (4.56–2.45 billion years ago) to the Proterozoic Eon (2.45–0.543 billion years ago). This transition brought about the Great Oxidation Event, without which advanced life would never have been possible on Earth.

A team of four geochemists and geophysicists led by Bernard Marty at the Centre de Recherches Pétrographiques et Géochimiques (CRPG) in France published their analysis of flux measurements of volatiles from Earth’s mantle.1 Marty’s team first established that mantle degassing increases the amount of the inert gas isotope, xenon-129. That is, there is a direct correlation between the amount of xenon-129 released into the atmosphere and the amounts of carbon dioxide, water, nitrogen, methane, and halogen gases that are simultaneously released into the atmosphere.

Measurements by Marty’s team showed that during the Archaean Eon, xenon-129 in Earth’s atmosphere was depleted relative to the modern atmospheric composition. In the words of Marty’s team, this depletion “would require the degassing rate of Earth at the end of the Archaean to be at least one order of magnitude [at least a factor of ten times] higher than today.”2

Source of the High Degassing Rates
Marty’s team demonstrated that the intense degassing at the end of the Archaean Eon cannot be explained by any conceivable plate tectonic activity. Rather, the degassing must have arisen from a relatively brief burst of intense mantle convection activity that generated several extensive “mush ocean events.”

Mush oceans refer to liquid crystal mushes (magma suspended in a liquid phase) that existed within certain regions of the oceanic crust. Previously, researchers had shown that during long periods of sluggish plate tectonics, such as what typified the Archaean Eon, mush ocean events can occur.3

Marty’s team explained how these melt inclusions in oceanic crust occur. Mantle convection would need to melt the mantle just below Earth’s crust. A buildup of heat in the mantle generated by the radioactive decay of the superabundance of uranium and thorium that existed at that time in Earth’s core would explain the needed mantle convection.

Mush ocean events would have increased the overturn rate of cooled material in the crust and the asthenosphere (the thin layer just below the crust where the crust begins to melt into the mantle). This overturning caused the much-enhanced degassing. The increased overturning, however, also resulted in high rates of heat loss and, thus, rapid cooling of the upper mantle and crust. Hence, the mush oceans, increased overturning, and much-enhanced degassing were sustained for, at most, only 300 million years.

High Degassing Rates Outcomes
During this period of volcanic eruptions, the release of huge quantities of sulfur dioxide (SO2) into the atmosphere would have reacted with water vapor (H2O) to produce large amounts of sulfuric acid (H2SO4):

Dissolution of this sulfuric acid into the oceans beginning 2,450 million years ago would have been metabolized by sulfate-reducing bacteria to produce pyrite (FeS2). Here is the relevant chemical reaction:

Therefore, for every 32 moles of sulfur dioxide released into the atmosphere by continental volcanic eruptions up to 45 moles of molecular oxygen may be produced by sulfate-reducing bacteria in the oceans. (One mole = 6.02214076 x 1023, the number of atoms in 12 grams of carbon.)

Two British geochemists, Jake Ciborowski and Andrew Kerr, calculated that, at a minimum, the Matachewan LIP by itself pumped 2.47 quadrillion kilograms of oxygen into the atmosphere.8 This amount of oxygen was sufficient to raise the atmospheric oxygen level from 0.0001 percent previous to 2.45 billion years ago to greater than 0.23 percent after 2.45 billion years ago.

The Matachewan LIP is the first massive igneous event that occurs after the emergence of continents. This event brought about a major shift in volcanic gas chemistry. The resultant atmospheric oxygen stopped the mass-independent fractionation of sulfur and initiated the oxygenation of Earth’s atmosphere. These results led to Earth’s transition from being able to support only the most primitive of microbes to being able to support a wide diversity of advanced life-forms.

The release of huge quantities of carbon dioxide into the atmosphere also played a crucial role. The dramatic rise in atmospheric oxygen brought methanogenesis to a near halt. Methanogens (methane-producing bacteria) can barely survive even trace levels of oxygen. Consequently, the atmospheric oxygen rise caused a sharp drop in atmospheric methane, a powerful greenhouse gas. The high degassing rate of carbon dioxide, another greenhouse gas, that occurred at the end of the Archaean Eon largely compensated for the loss of atmospheric methane.

As it was, the abrupt rise of atmospheric oxygen brought about by the Matachewan LIP event led to several long glaciation events. Thanks to the input of extra carbon dioxide into the atmosphere, these glaciation events never caused Earth to become a permanent snowball (completely covered with a thick layer of ice and snow) that snuffed out life. Thanks to the extra carbon dioxide not being overwhelmingly abundant, the glaciation events were sufficiently severe to lay down some of Earth’s richest metal ore deposits9—deposits that proved crucial in the launch of human global civilization.

Earth’s big burp not only occurred at a just-right location but also at a just-right time. The Sun’s luminosity is not constant. As its nuclear furnace continues to fuse hydrogen into helium, the Sun becomes progressively brighter. The figure below shows how the Sun brightens throughout the history of life on Earth. 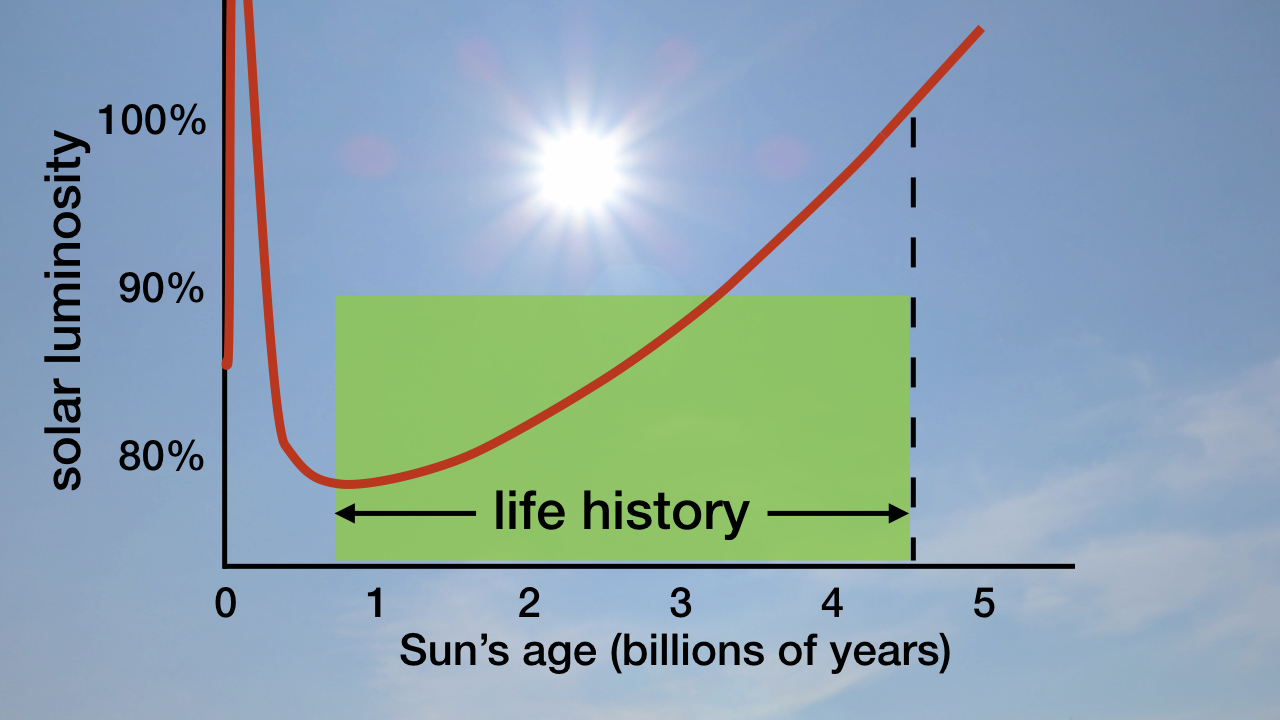 If Earth’s big burp had occurred any earlier, the resultant cooling would have led to a permanent snowball and the end of all life. If Earth’s big burp had occurred any later, there would not have been adequate time between the burp and the moment when the Sun would be too bright for advanced life to exist. This precise timing was needed for biodeposits (such as fossil fuels) to be built up and for the necessary chemical transformations of Earth’s surface environment to occur in order to support global human civilization.

Earth’s series of just-right events accompanying the big burp provides yet more evidence for the supernatural, super-intelligent handiwork of God for the specific benefit of life, of human beings, and human civilization.

Featured image: Banded iron rock formations like this one in Karijini National Park, Western Australia, will form under the oxygen-poor conditions that characterized the time just before and after the Great Oxidation Event.
Image credit: Graeme Churchard, Creative Commons Attribution

The replicating molecules of life (DNA and RNA) are composed of different nucleobase molecules linked together by phosphates and five-carbon sugars. Without the nucleobase...
Biochemistry