Other Unique Features of Chameleons

The ability to change skin color is just one of several outstanding body design features that chameleons possess. They also possess the longest tongue-to-body-length ratio of any animal. Some chameleon species can project their tongues out of their mouths to an astounding length that is double that of their bodies (not including their tails)! Chameleons are equipped with an extremely complex set of specialized bones, muscles, and collagenous elements that enable the tongue to be catapulted out to its full length in just 0.07 seconds (see image 1).1 The elastic recoil in the tongue projection mechanism is designed to be relatively insensitive to temperature changes.2 Thus, unlike other reptiles, chameleons can capture prey even when their body temperatures are low.

The machinery controlling the tongue action of chameleons would be useless if it were not for an equally exquisite design of its eyes. Each eye of a chameleon can pivot and focus independently, giving it a 360° arc of vision and the ability to track prey without moving its head. Each eye is independently capable of depth perception (through varying the focus rather than by binocular triangulation) and can accurately track flying insects no matter how fast they are flying. Each eye consists of a negative lens and a positive cornea. Because of this unique telephoto lens system, chameleons possess the highest sight magnification, relative to their body size, of any vertebrate animal.3 There is no limit to how tiny an insect it can grab.

Now, biophysicists have discovered another amazing design feature that chameleons possess. Their tongues are coated with a special adhesive that equips them to capture not just small flying insects but large insects as well.4 This adhesive is a special mucus with a viscosity measure that is 400 times greater than that of human saliva. The combination of the very high viscosity of the mucus coating the tongue, the large contact area the chameleon’s gigantic tongue can make with its prey, and the tongue’s blazingly fast retraction velocity enable chameleons to capture prey that measure a large fraction of their body sizes. This combination of design features in concert with the chameleon’s unique eye designs also explain why chameleons are the only reptiles that, under normal circumstances, never miss their prey.

In Job 38–41, God speaks about how wondrously he designed the lion, the raven, the goat, the deer, the donkey, the ox, the ostrich, the horse, the hawk, the eagle, the hippopotamus, and the crocodile. As I explained in chapters 10 and 12 of my book Hidden Treasures in the Book of Job, each of these creatures stands alone among Earth’s animals in manifesting their marvelous design features. Similarly, the many complex design features of the chameleon really stand out among all Earth’s terrestrial animals. The chameleon has no peer. No other land animal comes close to matching all its exquisite design features 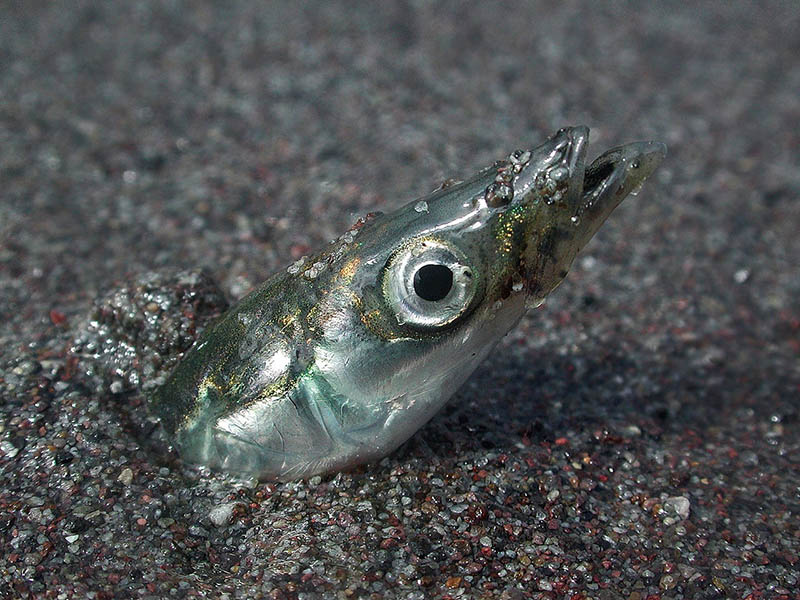 In a comparative study of the sand lance and the chameleon, three zoologists noted 13 complex morphological designs that the two species share in common.5 Five of the 13 designs are features that are not known to exist in any other fish or lizard species.6 Commenting on just the unique eye designs, the authors wrote,

“This is a completely new design principle found only in the eyes of these two vertebrates.”7

How the Two “Chameleons” Challenge Evolution

Models of biological evolution predict that morphological designs are the product of natural selection. However, the forces of natural selection in the desert environment of chameleons are radically different than the seafloor bottoms of sand lances. Rather, the identical designs that both chameleons and sand lances share provide examples that the more we learn about the universe, Earth, and all the life that Earth contains, the more evidence we establish for the supernatural, superintelligent handiwork of God. Or, as the psalmist declared thousands of years ago,

Spider Silk Inspires New Technology and the Case for a Creator

Where Charles Darwin and evolutionists today agree is that humans and modern apes are both naturally descended from a single primate species that long...
Biology

The Logic of DNA Replication Makes a Case for Intelligent Design

Why do I think God exists? In short: The elegance, sophistication, and ingenuity of biochemical systems—and their astonishing similarity to man-made systems—convinces me that...
Biology