Two weeks ago, I wrote about how recent observations of distant quasars and blazers at short wavelengths eliminated many of the quantum gravity models certain atheists appeal to in their attempts to escape a cosmic beginning and the implied cosmic Beginner.1 I noted that astronomers can make these constraints on quantum gravity speculations even more rigorous and limiting by measuring the image sharpness of quasars and blazers at greater distances and shorter wavelengths than achieved so far.

In the latest issue of the Astrophysical Journal a team of four astronomers proposed another ingenious observational tool2 for penetrating the state of the universe when, back about 13.8 billion years ago, it was smaller in diameter than 1.6 x 10-35 meters (orders of magnitude smaller than the diameter of an electron). They explained how the discovery of pulsars orbiting supermassive black holes and subsequent measurements of the orbital features of such pulsar-black hole binaries could yield important information about quantum gravity physics.

A black hole is a massive body that is so highly compressed that the gravity of such a body will not permit anything to escape the body, not even light. A pulsar is a highly magnetized, fast-rotating neutron star (a solid ball of neutrons) that emits a highly collimated beam of electromagnetic radiation (see image). Pulsars are like lighthouses in that a fixed observer will see a pulse of light once per rotation period of the pulsar. 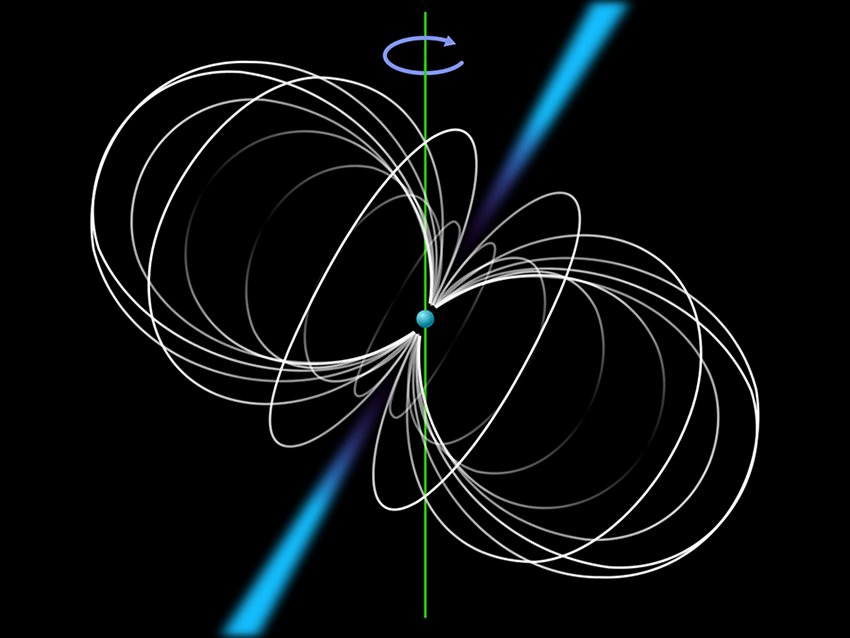 Pulsars rank as the most accurate natural clocks in the universe. Inside a black hole’s event horizon (the distance from the center of a black hole where gravity begins to become so powerful that no matter or energy, not even light, can escape) quantum gravity physics operates.

The team of four astronomers showed that measurements of the timing of the repetitive light pulses from a pulsar orbiting just outside the event horizon of a sufficiently massive black hole will allow astronomers to determine the degree and the manner in which information escapes from the black hole. In particular, the team showed that quantum fluctuations of the space-time geometry just outside a black hole’s event horizon will cause an increase in the measured root mean square deviation of the arrival times of pulsar pulses traveling from near the event horizon. Depending on the quantum gravity model and the mass of the black hole, the root mean square deviation can range from less than a microsecond to several minutes. Thus, such a determination will provide a powerful tool for testing competing quantum gravity models.

The opportunity to gain yet more knowledge of the physics of the quantum gravity era (the physics of the universe when it was less than 10-43 seconds old) has the potential of adding to the already impressive amount of evidence that the universe was created a finite period of time ago by a causal Agent that transcends matter, energy, space, and time. Such a causal Agent uniquely defines the God of the Bible.

Featured image: M87, a Supergiant Galaxy in the Virgo Cluster of Galaxies
In the nucleus of M87 resides a black hole that is 6.4 billion times more massive than the Sun. It is responsible for the blue jet emanating out from the right side of M97’s nucleus. You can watch a short video clip that zooms into M87’s black hole jet here.
Featured image credit: NASA/ESA/Hubble Space Telescope

Carbon-14 and the Christian Worldview

The Dead Sea Scrolls are considered by many to be the most important archaeological discovery ever made. One of the many tools used to...
Physics & Mathematics

It may be surprising for some readers to learn that the Bible declared millennia ago that the fundamental physics of the universe has not...
Physics & Mathematics