Many people are convinced that naturalistic explanations are adequate, by themselves, to explain the entire history of life on Earth. How do believers in the God of the Bible persuade these folks that God must have taken a very significant role in shaping the history of life?

Rather than getting bogged down in the complexities of natural selection, mutations, gene exchange, and others, I have found that engaging biological naturalists on such simple subjects as the changing physics of the Sun, Earth, and Moon to be productive. For example, since the time life began 3.8 billion years ago, the Sun’s luminosity has increased by a little more than 20 percent (see figure below). The fusion of hydrogen into helium inside the Sun’s nuclear furnace raises the Sun’s core density which, in turn, causes the Sun’s nuclear furnace to burn ever more efficiently. 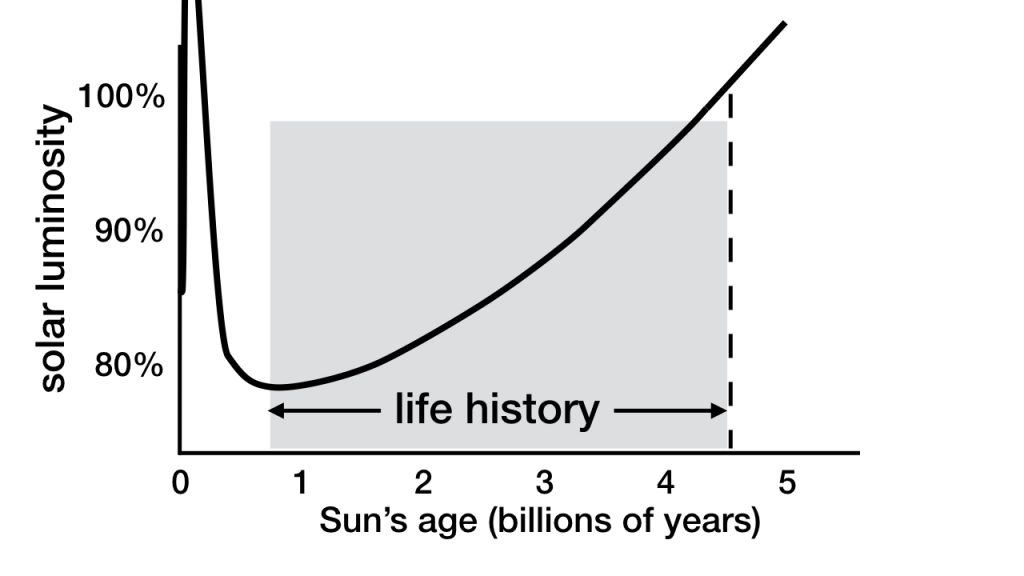 Figure: Sun’s Luminosity History. The Sun lights up dramatically, getting almost twice as bright as it is now as it initially gains mass, then dims precipitously during a brief period of mass loss. Then, as its nuclear furnace kicks in, it burns ever more brightly until it expends all its nuclear fuel.

This increasing solar luminosity poses a threat to Earth’s life, which can survive only about a one percent change in incident sunlight (and the heat it brings). Life’s survival depended on some kind of thermostat. A semi-periodic cycle of extinction events followed by speciation events served that purpose. The extinction events removed life-forms less reflective of sunlight and less able at removing greenhouse gases from Earth’s atmosphere, which trap the Sun’s heat. The speciation events that followed introduced new life-forms more efficient in removing greenhouse gases and more reflective of sunlight.

This step-by-step sequence kept Earth from overheating and maintained a survivable temperature on Earth’s surface as the Sun’s nuclear furnace continually raised the Sun’s brightness. So, in spite of the Sun’s 20+ percent brightening, Earth’s surface temperature remained optimal for life. However, if nature alone cannot account for even the first life-forms (as simple or complex as they may have been), how can it explain the sudden reappearance of both similar and novel new life-forms and increasingly varied and complex life-forms, after each mass extinction event to perfectly compensate for the Sun’s increasing brightness?

This step-by-step sequence must be carefully and continually fine-tuned to prevent Earth from becoming permanently sterile. Just-right life-forms at the just-right amounts must be removed from Earth at the just-right times. Just-right new life-forms in the just-right amounts must replace the life that is removed at the just-right times and in the just-right locations on Earth. The epochs between the mass extinction and mass speciation events must be brief. To sustain life on Earth at sufficient abundance levels to maintain the compensation for the Sun’s increasing luminosity, the ecological relationships among the species in each mass speciation event must be immediately or near immediately optimized. All this careful and continual fine-tuning requires a Mind who knows and understands the future physics of both the Sun and Earth. All this careful and continual fine-tuning requires a Being powerful enough to quickly create the right life-forms precisely after every mass extinction event in the right amounts at the right times and places and with just-right ecological relationships. That Being matches the One described in the pages of Scripture.

Atmospheric Pressure and the Possibility of Life

In mountain climbing, the death zone refers to altitudes above 26,000 feet (7,900 meters). At that height, the atmospheric pressure is only 35 percent...
Evolution

Mismatches between Genetic Data and the Fossil Record

Charles Darwin acknowledged that one of the issues faced by his theory of evolution was that the fossil record didn’t match the theory.1 Specifically,...
Evolution

Too Good to Be True: Evolution and the Origin of Bioinformation

New work by researchers from the Georgia Institute of Technology impacts one of the more popular arguments used to support the creation/intelligent design perspective:...
Evolution