On December 27, I counted more than a dozen web articles announcing that radio signals from deep space could be from intelligent aliens. These articles created a web buzz that generated a flurry of questions, including the following:

The most cited of these web articles began with the declaration that “scientists may have found proof that E.T. really is phoning home.”5 The basis for this claim is a paper published in the December 20 issue of the Astrophysical Journal.6 In this paper, an international team of 24 astronomers reported their detection of six additional fast radio bursts from the only known repeating fast radio burst (FRB) source, FRB 121102. The six FRBs the team detected bring the total of FRBs seen from FRB 121102 up to 17.

Fast Radio Bursts
FRBs are transient radio pulses that last just a few milliseconds. The energy emitted in those few milliseconds is comparable to the total energy the Sun releases in a month. Unlike radio messages sent out by humans, FRBs are broadband.

The brevity of the bursts implies that the FRB sources cannot be large. The sources cannot be any bigger than about 100 kilometers in diameter. This limit eliminates ordinary stars and even white dwarf stars as candidates. Included as possible candidates, however, are neutron stars, pulsars, and black holes. The high energies of the FRBs, though, exclude most neutron stars and pulsars.

The Case for FRBs as ETI Signals
In the 17-page paper, there is not a word or a hint that the authors thought that the fast radio bursts might be signals sent out from extraterrestrial intelligent aliens. Other scientists, however, noted that radio signals sent out by humans with the intent of communicating intelligent information often are characterized by short-duration, high-energy radio pulses.

These scientists speculated that the FRB sources reside inside rather than outside our galaxy. Rather than the dispersion measure values indicating broadband radio emissions from sources inside galaxies billions of light-years away, these scientists asserted that relatively nearby intelligent aliens purposely sent out narrowband low-frequency signals after they had sent out narrowband high-frequency signals.

Claimed additional support for the intelligent nature of FRBs was the fact that FRBs discovered up until 2015 had dispersion measure values that were close to multiples of 187.5 cubic centimeters parsec (1 parsec = 3.28 light-years).7 This pattern, said the ETI proponents, could not be a coincidence.

What Are FRBs Really?
The database of FRBs is not large. The total number of FRBs detected by astronomers so far is only 23. At the end of 2015, the total number of detected FRBs was just 18. As astronomer Maura McLaughlin pointed out, “It’s very easy to find patterns when you have small-number statistics.”8 Bearing out McLaughlin’s critique is that fact that FRBs detected since 2015 do not fit the multiples of 187.5 cubic centimeters parsec pattern.

Five of the six FRBs seen by the international team of 24 astronomers were detected by the 300-foot diameter Green Bank Telescope (see figure 1). The sixth was detected by the 1,000-foot Arecibo telescope (see figure 2). Since the Arecibo and Green Bank telescopes are geographically separated from one another by about 2,500 kilometers (1,550 miles), and since the sky positions of the FRBs seen by both telescopes are consistent to within one-tenth of a degree, the FRB source (FRB 121102) must be at least 17.3 billion kilometers (10.7 billion miles) away. This proven minimum distance rules out the possibility that FRBs originate from man-made sources on Earth or from man-made artificial satellites. 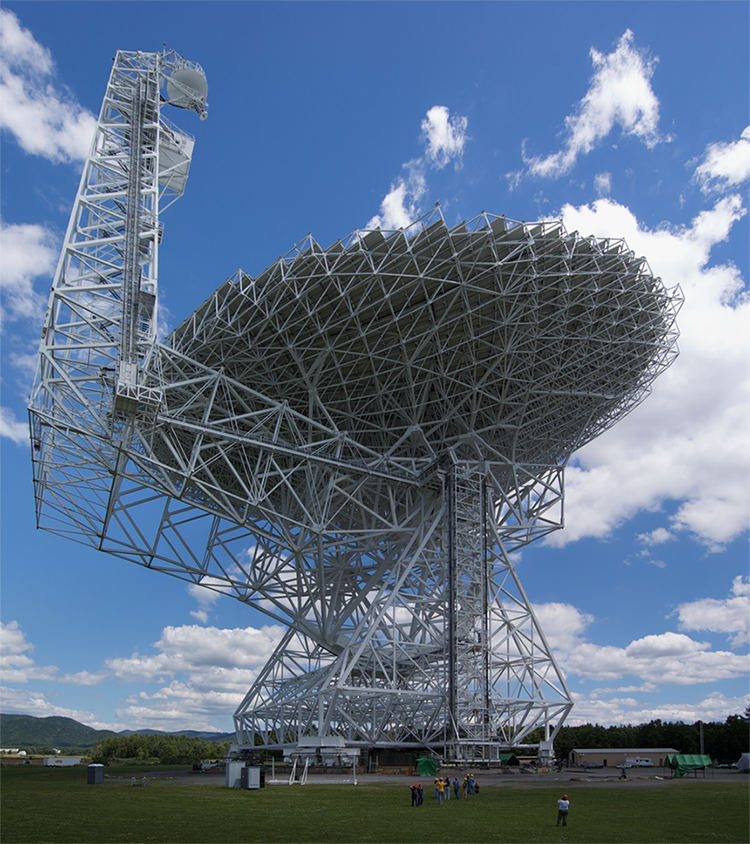 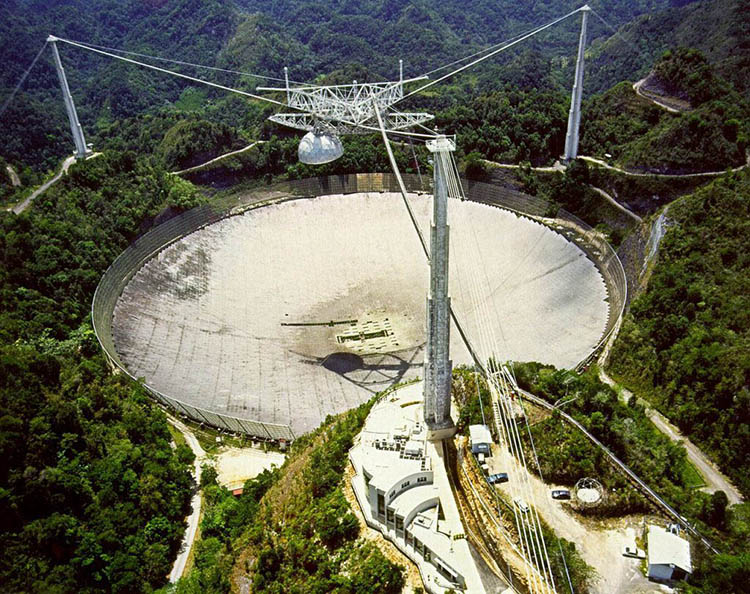 The FRBs detected by the international team “display extreme spectral variations and an episodic burst rate.”9 Such features are not characteristic of intelligent signals. Nor is the wasteful nature of the energy spectrum of FRBs. It takes a huge amount of energy to send out a signal that spreads across a broad range of frequencies. Just as a radio station practices the principle of economy by broadcasting their message at a narrow range of frequencies, so too would we expect intelligent aliens to have discovered and practiced the principle of economy.

The primary reason why some scientists have presumed that FRBs must be signals sent out by intelligent aliens is that possible natural sources for the FRBs have been either ruled out or deemed to be very unlikely. The team of 24 astronomers have shown this reason to be unfounded.

The far extragalactic distance, the repeating nature of the FRBs from FRB 121102, and the analogy to the Crab Nebula pulsar led the team to conclude that FRB 121102 is either a young pulsar (a rapidly rotating neutron star that emits a collimated beam of light) or a young magnetar (a neutron star with an extremely powerful magnetic field, up to 1011 tesla). The team demonstrated that both the short duration and the energy release of FRBs are well within the range of very young pulsars and very young magnetars. Other possible natural candidates for FRBs are accreting black holes, blitzars (rapidly spinning pulsars that rapidly collapse into black holes), certain supernova eruption events, and neutron star merger events.

The team concluded their paper by pointing out that a precise identification of the bodies responsible for the FRBs will require accurate distance measures of the FRB sources. For that to be possible, astronomers will need to identify the host galaxies of the FRB events. FRB 121102 appears to be astronomers’ best shot at such an identification. That best shot will require more multiple telescope and multiple wavelength efforts like the one reported by the 24-astronomer team.

Chuck Horst, San Diego State University astronomer and Reasons to Believe visiting scholar, is part of an even larger team of astronomers coordinating telescopes around the world and in orbit about Earth in an effort to identify and measure the distances to the host galaxies of FRBs, with the ultimate goal of identifying what kind of body (or bodies) is responsible for FRBs. Chuck will be writing some follow-up blog articles on FRBs that will be posted on the RTB visiting scholar blog launching in 2017.

Last week’s Take Two discussed "A Match Made in Heaven"—the happy union of apologetics and evangelism. This week, I dare to suggest another happy...
Worldviews

Our Only Hope? A New Search for Extraterrestrial Intelligent Life

In Star Wars: A New Hope Princess Leia utters the famous plea, “Help me, Obi-Wan Kenobi. You’re my only hope.” Carl Sagan, in a...
Astronomy

Life and the Transfer of Life Near the Galactic Center

In the latest issue of Astrophysical Journal Letters three astrophysicists claim that there are habitable planets near the center of our galaxy and that...
Biochemistry