I grew up in British Columbia, a Canadian province that is 40% larger than Texas and almost entirely covered by forests. When I attended the University of British Columbia, the department of forestry was one of the larger educational departments on campus. In fact, the university was founded with a land grant of more than six square miles so that the department of forestry could have an on-campus forest on which they could conduct some of their research.

Debates over global warming and climate change have focused attention on forests, but those discussions extend far beyond departments of forestry at universities. Climatologists are mobilizing their efforts to alert the public that, of all terrestrial life, forests are the most efficient in removing greenhouse gases from the atmosphere and for storing the greatest quantity of carbon.

Forests, therefore, play a major role in stemming global temperature rises. Consequently, most climatologists argue for all-out efforts to preserve forests. Recent forestry research findings, however, demonstrate that how one goes about preserving forests makes an enormous difference in forests’ impact upon the climate. Some efforts to preserve forests could enhance global warming, while others could mitigate it to a remarkable degree. Interestingly, the best mitigation strategies in forest management also deliver the greatest economic benefits.

Role of the Biggest Trees
The bigger the tree, the more carbon it stores. Even though the largest trees in a typical forest comprise less than 10% of the total number of trees, they store about 50% of the total amount of carbon. The tallest trees in a forest provide additional habitats for animals, especially for birds and mammals. Tall trees also capture moisture for their ecosystems that otherwise would be lost. For example, the tallest trees on Earth, the California redwoods, capture moisture from marine layer fogs wafted in from the Pacific Ocean via westerly winds. This moisture can account for up to half the total precipitation received and makes possible a rich ecosystem of life in an otherwise relatively arid region.

The largest trees also provide recreational benefits. They are majestic to look at (see figure). They provide shade. They limit the growth of ground level shrubbery, making it possible for animals and humans to easily navigate their way through forests possessing lots of big trees. 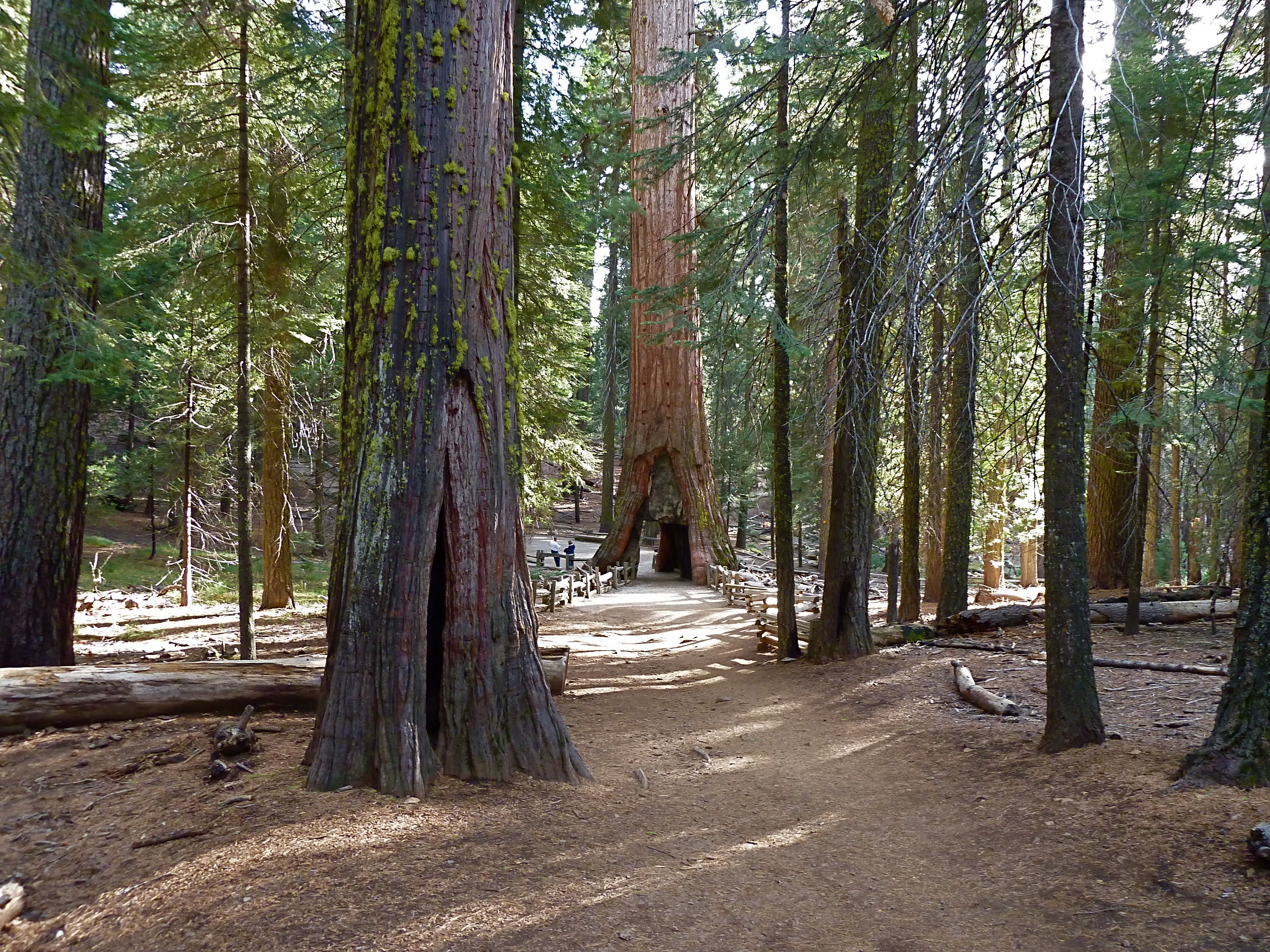 Figure: Giant Sequoias, the Largest Trees on Earth
The living tree in the center of the photo has a rectangular cut through the bottom of its trunk that is large enough to allow automobiles and small trucks to drive through. Image credit: Hugh Ross

These recognized benefits of big trees explain why so much of forest conservation focuses on preserving the largest trees in forests. However, new research also shows several detriments that mandate major adjustments in forest management.

Biggest Trees Most at Risk
The biggest trees in a forest appear to be the most invincible. They are the most difficult to knock down. Their leaves, seeds, and fruits are the highest above ground level.

But four forest field studies reveal that in fact the largest trees in a forest are the ones most likely to be destroyed by lightning, drought, and pests. In the first, research conducted by a team of ecologists led by Evan Gora and Steve Yanoviak showed that in tropical forests, lightning accounts for 40.5% of large tree deaths but only 5.4% and 2.9% of medium-sized and small tree deaths, respectively.1 For these studies, the trees were grouped into three different size categories according to the diameters of their trunks.

In a second research effort, forest ecologists Atticus Stovall, Herman Shugart, and Xi Lang recently published eight years of field studies of 40,000 hectares of forests in California’s Sierra Nevada Mountains.2 These forests are subject to periodic droughts. Researchers found that when droughts were not a factor, trees of all sizes died at approximately the same rate. However, during a severe drought year 40% of trees taller than 30 meters (100 feet) died, compared to only 28% and 16% of medium-sized and small trees, respectively.

A third study featured forest ecologist Songlin Fei and his colleagues studying the impact of invasive pests on hardwood trees in the eastern United States.3 He found a direct correlation between the size of a tree and its likelihood to die as a result of invasive pests. Fei concluded that elderly trees are less able than younger trees to recover from invasive insects and pathogens.

Best Tree Harvesting Strategies
Research shows that the largest trees in a forest are the ones most vulnerable to storms, lightning, droughts, invasive pests, and disease. They have the highest death rates. When large trees die and decay, they release huge quantities of carbon dioxide (a greenhouse gas) into the atmosphere. Combined with the fact that living large trees do not grow as fast as younger trees, this means they remove much less carbon dioxide per unit of time from the atmosphere than younger trees do.

For these reasons, a good strategy for mitigating global warming would be to harvest the largest trees in a forest while they are still healthy. Their wood can be manufactured into building materials and furniture in which the trees’ carbon would be sequestered for long time periods.

Banning all lumbering, as many environmentalists and climate change activists recommend, would actually increase global warming. However, harvesting all the large trees could collapse forest ecosystems, likewise enhancing global warming. The most environmentally sound and economically beneficial strategy calls for harvesting the slowest-growing large trees while leaving enough of the healthiest and faster-growing ones to sustain and enhance the forest ecosystem. This strategy must ensure that the harvesting sustains the full diversity of species of large trees. It also needs to ensure that the age distribution of the trees maximizes the amount of carbon per unit of time being removed from the atmosphere.

Humans Are Designed to Stay in Touch

“Are we doing this again?” My patient asked as we stood awkwardly in an exam room with our right hands hanging in midair. Those...
Design