While most people think of the big bang as an explosion in space, scientists use the term to describe the beginning of space, time, matter, and energy. The Bible describes a few key characteristics of the universe that scientists now have the ability to measure. At least five biblical writers describe an expanding universe (e.g., Job 9:8; Psalm 104:2; Isaiah 40:22; 42:5; 44:24; 45:12; 48:13; 51:13; Jeremiah 10:12; 51:15; and Zechariah 12:1). Scripture also talks about the constancy of the laws of physics, most explicitly stated in Jeremiah 33:25. Genesis 1:1 and many other passages declare that the universe began to exist (thus, required a Beginner). Hebrews 11:3states that the universe that we can observe and detect did not come from that which we can observe and detect, implying that space, time, matter, and energy all had a beginning. Romans 8:18–21 speaks of a pervasive law of decay. These four characteristics—a singular beginning, cosmic expansion, and constant laws of physics including the law of decay—define a big bang universe, a universe that must get colder and colder in a highly predictable manner as it gets older and older.

The Bible leaves many details—such as the expansion rate and the strengths of the laws—for us to measure. However, this correspondence between the biblical description of the universe uniquely authored thousands of years ago, and the best scientific understanding of the universe provides strong evidence for the supernatural inspiration of the words of the Bible.1

The big bang creation model predicts specific histories for the formation, development, and death of different kinds of galaxies. It predicts, for example, that the most massive galaxies in the universe formed early in the history of the universe and that these galaxies so aggressively formed stars during their youth that they consumed all the available gas for star formation and, thus, have remained “dead” for the past two-thirds of the universe’s history. In astronomy, a “dead” galaxy is one in which any significant star formation has ceased.

Computer simulations of the big bang creation model predict that indeed most of the most massive galaxies in the universe will be dead. These simulations show that the most massive galaxies formed through major merger events that gave rise to intense nuclear starbursts (aggressive star formation events in or near the core of the merger events) that quickly exhausted the gas needed for star formation. The merger events and subsequent nuclear starbursts transform the structure of the galaxies into very large elliptical galaxies (see featured image).

Until now, this theoretical picture for the evolution of the most massive galaxies in a big bang universe lacked observational validation. Astronomers lacked the telescope power to view the cores of massive galaxies at sufficiently high resolution when the universe was only 3–4 billion years old. Such observations require the capacity to make detailed maps of galaxies that are located 10–11 billion light-years away.

An international team of thirteen astronomers used the combination of the Hubble Space Telescope and gravitational lensing to resolve the inner region of a very massive galaxy at redshift = 2.1478.2 A redshift of 2.1478 corresponds to a distance = 10.7 billion light-years and a time when the universe was just 3.1 billion years old (current age = 13.8 billion years).

According to general relativity, a massive body will bend a beam of light that passes sufficiently close to it. Thus, a massive galaxy or galaxy cluster directly in front of a much more distant galaxy will bend the beams of light from the distant galaxy in the same manner that a convex lens bends beams of light (see figure below). Such a natural lens provides astronomers with a natural telescope. Thus, the combination of the Hubble Space Telescope and a fortuitous gravitational lens gave to astronomers the super telescope they needed to image the interior of a very distant galaxy at a high enough resolution to determine the galaxy’s state of star formation. 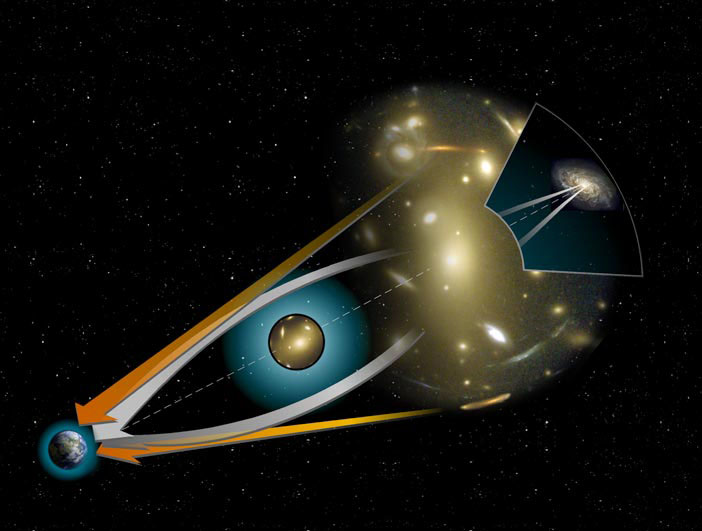 The team’s analysis of the z = 2.1478 galaxy’s stellar populations and kinematics showed that the galaxy was a fast-spinning disk galaxy, implying that the galaxy’s stars must have formed in the disk rather than in merger-driven nuclear starbursts. The team concluded that the galaxy’s aggressive star formation was fed by giant “streams of cold gas, which were able to penetrate the hot halo gas until they were cut off by shock heating from dark matter halo.”3 Thus, the team discovered another way for giant galaxies, in addition to major merger events, for aggressive star formation to exhaust all the available gas for star formation before the universe attains an age of four billion years.

The team drew the following conclusion in the abstract of their research paper: “This result confirms previous indirect indications that the first galaxies to cease star formation must have gone through major changes not just in their structure, but also in their kinematics to evolve into present day elliptical galaxies.”4 In other words, direct observations of very distant galaxies confirm for the first time a major prediction of the big bang creation model. The team’s research provides another example of how the more we learn about the universe, the more evidence we accumulate for what the Bible, and the Bible alone, accurately stated about the origin and history of the universe thousands of years ago.

Does Autism Preclude Belief in God?

Hugh Ross addressed that question on a recent Science News Flash podcast. Researchers surveyed the discussions of 192 people who posted on an autism...
Worldviews

Several years ago, a colleague and I were discussing the writing of a computer program we planned to use for processing our radio astronomy...
Worldviews