The discovery of two ancient ovens in Jordan provides evidence that humans were making bread at a time consistent with the Bible’s account of early human history. In chapter 15 of my book Improbable Planet1, I described an archaeological/scientific discovery2 that established that humans living along the shore of the Sea of Galilee were selectively breeding and cultivating wild grains at least as long ago as 23,000 years before the present. The breeding and cultivation of such grains suggest that humans living 23,000 years ago were using the grains as a food staple that likely may have included the manufacture of bread or bread-like products.

In a previous blog3 I wrote about another archaeological/scientific discovery.4 Here, a team of five anthropologists and archaeologists unearthed a grinding tool from the Grotta Paglicci cave in southern Italy, from which they recovered “thermally pretreated” oat grains. The team achieved an accurate carbon-14 date of the grains showing that humans living 32,614 ± 429 years ago were grinding and roasting grains to manufacture flour.

Now, a team of five researchers, led by Amaia Arranz-Otaegui, have analyzed a site in Jordan and discovered two ovens that they concluded provides clear evidence that humans were using them to make bread or bread-like products 14,400 years ago.5 The site, Shubayqa 1, is located in northeastern Jordan in an area known as the Black Desert. The archaeological remains at Shubayqa 1 indicate that humans were using the site from 14,600–11,600 years ago and were primarily engaged in hunting and gathering.

Arranz-Otaegui’s team found an organic residue in one of two sunken fireplaces (see figure below) constructed of basalt flagstones. They analyzed this residue with a scanning electron microscope and identified 24 pieces of char that possessed the chemical and structural properties of ground cereal grains that had been mixed with water and baked or fried to make a flatbread. The team determined that the char pieces included at least one processed grain, wild einkorn wheat (Triticum boeoticum) and at least one root tuber, club-rush tuber (Bolboschoenus glaucus). 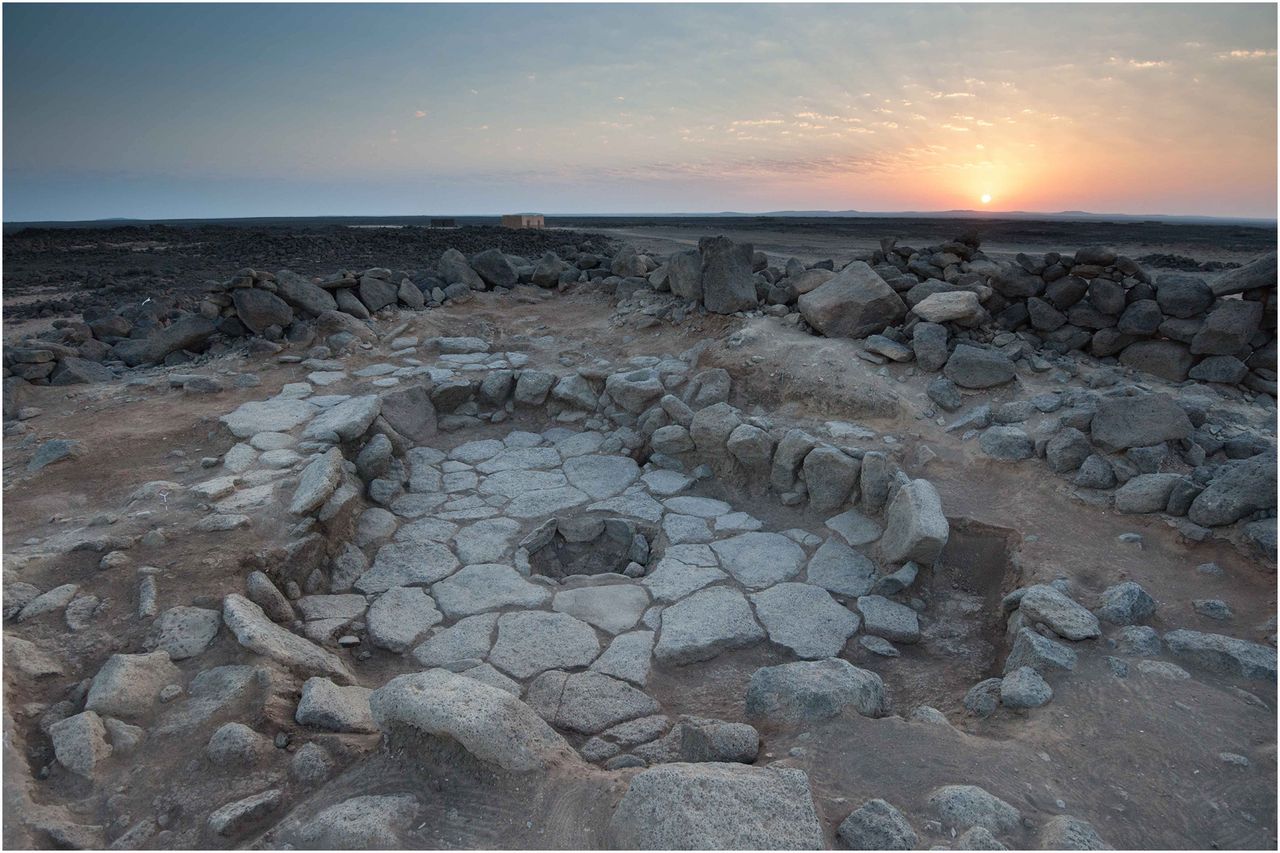 The carbon-14 date for the residue was 14,400 years ago. In their paper Arranz-Otaegui’s team drew two conclusions from the findings. They wrote that their results “demonstrate that the preparation and consumption of bread-like products predated the emergence of agriculture by at least 4,000 years.”6 Second, they stated that the slim archaeobotanical evidence they found showed that cereal exploitation for making bread was not common 14,600–11,600 years ago, and that bread became a staple for humanity only when agriculture based on the large-scale cultivation of grains was firmly established circa 9,100 years ago.7

In light of the previous discoveries and what I have written about early food-processing preparation and technology,8 I am persuaded that three more conclusions can be drawn. First, the evidence for humans engaging in the processing of grains for food preparation 32,600, 23,000, and 14,400 years ago indicates that throughout the last ice age, humans were continuously or near continuously engaging in some kind of bread-making industry. This industry was being practiced in spite of the extreme climate instability that existed throughout the last ice age.9

Second, the observation that bread did not become a staple in the human diet until the large-scale cultivation of grains was established is no reflection of any lack of motivation, innovation, or work ethic on the part of humans living before 9,100 years ago. The extreme climate stability that is needed to make the large-scale cultivation of grains did not exist until 9,100 years ago.10 Previous to that time, the global mean temperature was fluctuating by ±22° Fahrenheit (12° Celsius) on timescales of only a few centuries. Such extreme temperature fluctuations made the large-scale cultivation of grains impossible. Because of extreme climate instability, humans living before 9,100 years ago could not afford to live on bread alone or on any other one or two or three sources of food. Survival during that time required a predominantly hunter-gatherer economy supplemented by highly varied, small-scale agriculture.

Arranz-Otaegui’s team’s discovery complements the two previous discoveries on food-processing technology. It further substantiates the Bible’s accounts of the early history of humanity (Genesis 4) and the industry and technology employed by the first humans.

Where does Homo antecessor fit?

Who am I? How do I fit into the grand scheme of things? These questions gnaw at someone going through an identity crisis.
Human Origins & Anthropology

When my oldest child, Sarah (now 24 years old), was a toddler she loved to push the buttons on the keyboard of my very...
Human Origins & Anthropology