Earthquakes can be scary, even relatively small ones. Many years ago, when Kathy and I were living in a town house, we experienced a magnitude 6.1 earthquake where we were situated right above the epicenter. The quake immediately woke us up and shook us quite violently. It caused the drawers in our bedroom chest to fly across the room, hit the opposite wall, and splinter. However, thanks to California building codes, there was no damage to our town house and no injuries incurred by any member of our family.

Living as I do in earthquake country, I frequently get asked the question, Why would an all-loving, all-powerful God subject us to earthquakes? My answer is that given the laws of physics God that chose for the universe—laws that are optimized for the rapid, efficient conquest and permanent removal of evil and suffering1—earthquakes are essential for making advanced life possible. We see God’s benevolence in that the number and intensity of earthquakes are at the best possible levels for the well-being of human beings.

For advanced life to exist at all (or for any kind of primitive life to exist for a time period exceeding a few million years), Earth’s crust must crack easily into movable plates that can slide both past and underneath one another. These sliding motions produce earthquakes. Geophysicists and planetary astronomers refer to Earth’s crust breaking up into plates and the motions of the plates as plate tectonics. 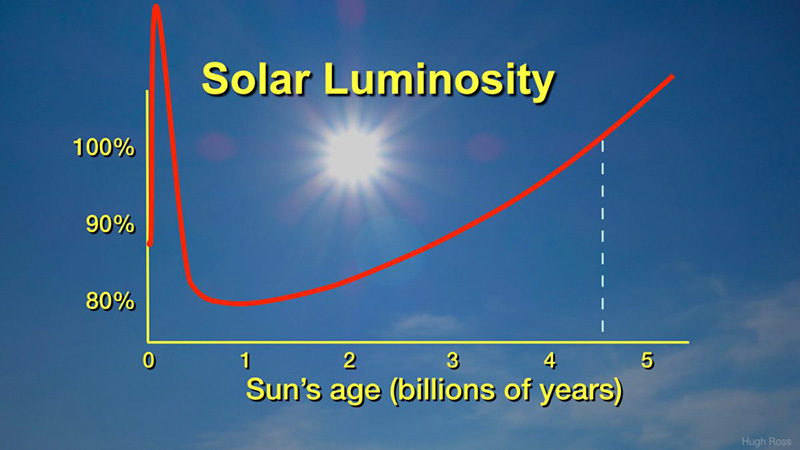 Figure: The sun brightens as it fuses hydrogen into helium in its nuclear furnace. The luminosity or brightness percentages on the y axis are relative to the sun’s present luminosity.

The primary means by which plate tectonics compensate for the sun’s increasing luminosity is through the erosion of exposed silicates. Silicates form when water makes the right kind of chemical contact with basalts. Silicates are lighter than basalts and thus tend to float above the basalts. The combination of this floating plus plate tectonics causes silicate rock to rise above sea level. Ongoing silicate production and plate tectonics result in progressively more and more silicate material rising above sea level.

As I explain in some detail in my book Improbable Planet,5 rain falling upon silicate rocks generates a chemical reaction whereby carbon dioxide from the atmosphere reacts with the silicates to produce carbonates and sand. The first benefit of this reaction is the removal of the powerful greenhouse gas carbon dioxide from the atmosphere. Consequently, as the sun brightens, Earth’s atmosphere becomes progressively less efficient in trapping the incident heat radiation from the sun. Silicate erosion into carbonates and sand, therefore, is a major factor in compensating for the sun’s increasing luminosity so that the temperature at Earth’s surface remains ideal for life. The second benefit is the production of industrially valuable carbonates and sand.

While silicate erosion is the most important factor in compensating for the sun’s increasing brightness, it is not sufficient by itself. To complete the needed compensation, huge amounts of biospheric carbon (carbon locked into the tissues of living and dead organisms) must be buried deep enough into Earth’s crust to prevent its decay returning carbon dioxide to the atmosphere.

Several decades ago, geologists noted that floods and volcanic eruptions bury enormous amounts of biospheric carbon. Until very recently, though, they had overlooked an equally important contributor to the burial of biospheric carbon. In the June issue of the journal Geology, it was reported that a team of nine geoscientists measured the amount of biospheric carbon that was buried by landslides and floods caused by the 2008 magnitude 7.9 earthquake that occurred in Wenchuan, China.6

The earthquake triggered massive landslides that rapidly buried hillside vegetation and organically rich soil. River discharge of biospheric carbon doubled in the far downstream portions of the rivers flowing out from the earthquake site. In their research paper, the team concluded that large earthquakes are indeed a major factor in drawing carbon dioxide out of the atmosphere.7

The team of nine geoscientists has therefore given us another item to add to our gratefulness list for Thanksgiving Day. We can thank God for all the large earthquakes that have helped keep our planet cool, even though the sun is getting progressively brighter. We can also thank God that earthquakes are powerful enough and sufficiently numerous enough to provide necessary compensation for our brightening Sun, but not so powerful and numerous as to make it difficult for us to live in cities. Owing to Earth possessing six different kinds of liquid water, Earth’s oceans being of just-right extents and depths, and Earth’s crust possessing the just-right kinds and abundances of minerals, talc production occurs at the subduction zones between the tectonic plates and sufficiently lubricates those tectonic plates so that civilization-ending earthquakes do not occur.

We have so very much to thank God for. The team of nine geoscientists’ discovery yields yet more evidence showing that the more we study and research the book of nature, the more items we accumulate to add to our list of things for which we must express gratefulness for God’s generous, loving provision.

In last week’s blog about Earth’s magnetic field1 I wrote about recent research by three Australian astronomers that demonstrated the possible existence of life...
Biology

In Genesis 1:28–30, God commands humanity to rule over all the earth and to manage the planet’s resources for the benefit of itself and...
Design

Was Earth Designed for Us or Did We Evolve to Adapt?